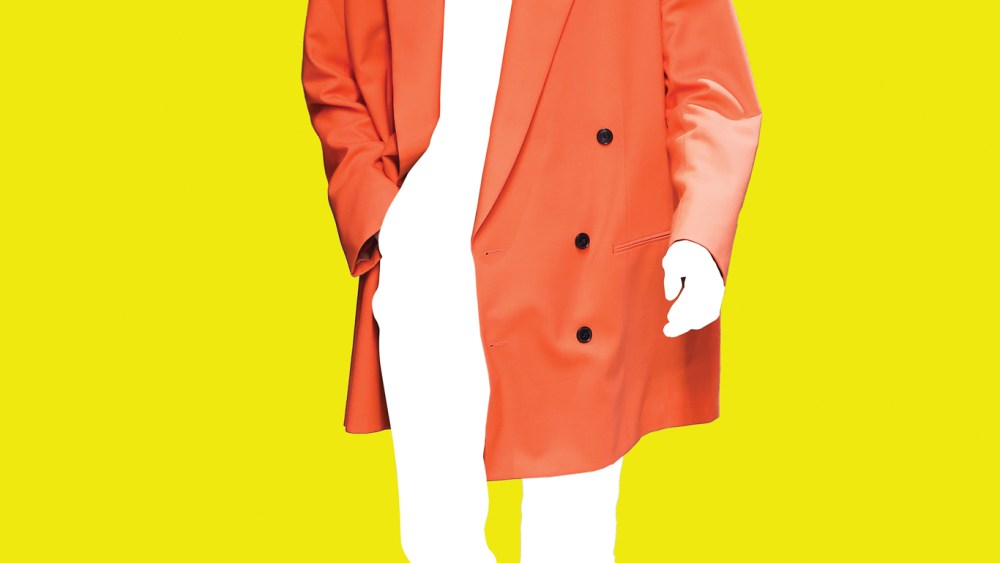 That is the sartorial philosophical question now acing men — not to mention brands and retailers — as a looser silhouette is beginning to percolate among some European and American designers. After more than a decade of shrunken silhouettes, pioneered by the likes of Hedi Slimane in Europe and Thom Browne in New York and taken to the masses by J. Crew and its Ludlow model, the pendulum is beginning to swing — or at least inch — the other way.

At the recently completed spring men’s shows, designers including Giorgio Armani, Gucci, Haider Ackermann and even the U.S.’s quintessential Southern gentleman Billy Reid showed voluminous blazers and baggy pleated pants that harked back to the power suits of the Eighties and Nineties rather than the rockers or preppies of the Fifties.

But is the world of men’s wear — where stylistic shifts take place at a glacial pace and customers evolve slower than Australopithecus — ready to adapt to a new shape? Some don’t think so.

“This is dangerous,” bristled Joseph Abboud. “We can’t play with men’s wear like we play with women’s wear. If we do, we will crash and burn. That’s why we never wanted to go too skinny. If you go too extreme, you lose the guy.”

Abboud should know. While he has his own higher-end, more fashion-forward line, he also is creative director of The Men’s Wearhouse, which appeals to the male masses with more than 1,700 stores in North America. While it took a while for the retailer to go skinnier, slim-fit suits now represent 45 percent of the company’s business.

“We have to move the needle gently,” Abboud continued. “We won’t be going to bigger, baggier clothes immediately.”

That said, Abboud did tweak his collection slightly for spring by broadening the shoulder, suppressing the coat and offering a subtle flare from the hips out. “In a way it’s like an hourglass,” he said. “The dimensions are slightly different, but nothing drastic.”

That temple of preppy-dom Brooks Brothers, which hired Browne to design an updated collection called Black Fleece in 2007, is holding off from going slouchier, as well.

“In men’s wear, it takes a period of time for rends to evolve,” said Lou Amendola, chief merchandising officer. “We saw the influence of slim suits in 2006 with Thom Browne and now it’s 50 percent of our business. We need change because then consumers will update their wardrobes, but it’s a slouchier jacket, “but we won’t throw the other things out. We’ll probably test something in the winter of next year or even spring-summer 2017.”

He said jacket silhouettes in 2016 will start moving toward more deconstructed shoulders and chest pieces, creating a little bit more slouchy of a silhouette, “but it’s not a big, baggy suit,” he said. After all, we’re talking about men’s wear, where a large portion of the population is probably still wearing slouchy suits anyway — having never cleaned their Nineties versions out of their closets. But the looser look coming along at Brooks isn’t just about suits.

Plain-front pants now represent 80 percent of the business, but “we were pushing for 40 percent eight years ago,” Amendola said. For fall 2016, the retailer will introduce a sin- gle-pleat model that will be around 5 to 10 percent

of the overall offering “and see how it goes.” Even J. Crew is evolving the look of the Ludlow. Frank Muytjens, head of men’s design for J. Crew, for spring showed a less-constructed model paired with drawstring pants along with pleated pants that were “softer and a little more slouchy” and a longer, oversize trenchcoat.

“The change in silhouette is something new and fresh,” he said. “More relaxed and friendly.” There are those brands, though, that have gone skinny and are staying that way. Ronny Wurtzburger, president of Peerless Clothing, the country’s leading tailored clothing-maker, joked that he hopes his competitors start showing slouchy

suits. “Then I’ll just get more business,” he said. Wurtzburger said in the U.S., men are just now getting into slim suits, “so I’m not going to do baggy at this point. The Europeans are more stylish and the Americans are more conservative. If anything, soft construction will be 6 percent of the assortment. It’s an item — but men won’t walk onto Wall Street wearing sloppy suits.”

Stephane Cremieux, chief executive officer of Daniel Cremieux, agreed. “There’s a difference between stage fashion and street fashion,” he said. “We’re doing clothes for people to wear to the office and not look like clowns. Once a man likes a suit fit, he’ll wear it forever.”

The Cremieux suit offering is slim and the company’s solid navy model with shorter, tighter pants is the bestseller. “No one wants baggy,” he said. “That’s a design trend and it looks good in pictures, but our customer wants to look elegant.”

Nor are European or Far Eastern consumers about to chuck the skinny for the slouchy.

Nick Keyte, head of men’s wear buying for John Lewis in London, said his customer is still seeking a “very clean, very modern” fit, which he defined as “slimmer and more tailored. There’s no doubt at a very high level, we have noticed a slightly fuller line coming through, but right now I think in terms of our market position, which is probably mid to premium, we’re still seeing amazing success in a more modern, slimmer silhouette.”

Murray Coetzee, head designer for Suitsupply, acknowledged the trend, “but it is more geared for real fashion followers. For us, it’s important to interpret these trends in a very subtle way. For example, we are already doing trousers with a pleated front for our more fashion-forward customers. Pleated trousers and waistcoats are definitely a trend we like.”

Karen Vernet, Printemps’ general merchandise manager of men’s apparel, homewares and private label, said: “Slim has been a very strong direction for the men’s silhouette for international designers, and today slim suits are more and more the standard for the ‘regular’ customers. It is true that in the past few seasons, we saw different proposals on the men’s silhouette playing on volumes, especially with large fluid pants (from Marni to Ermenegildo Zegna by Pilati), but very often the more commercial proposals in showrooms go toward the slim fits and as a retailer, we bet more on this.

“Of course, our role is to push for the new trend of slouchy, fluid pants, but we do it by touch, so that our customers go step by step into this.”

In China, where slim is definitely in, retailers and brands don’t expect a quick shift.

Mark Asaf, managing director of Empire International Tailors in Hong Kong, said, “Male fashion icons from major Asian entertainment industries in Hong Kong, Japan, Korea and Taiwan are still commonly seen wearing extra-slim and boyish suits, so it seems that the slim suit will be staying around for a while.”

While the company has seen a growing number of men interested in vintage suits — something straight out of the show “Boardwalk Empire” — slim suits still dominate in terms of demand. “The comeback of the classic 1920s bootlegger look is still in its early phases and only popular among a small group of individuals,” Asaf said.

Justin Chang, business development manager for Tcny, a younger label and subsidiary of Ascot Chang Co. Ltd., said, “We see a lot of young guys come in for slim suits and they want to look like guys out of ‘Mad Men’ or ‘Suits.’ Pretty much 85 to 90 percent of the guys who come in want to get a slim suit. In the last one or two years at Ascot Chang, we are starting to see a slightly older generation of guys wanting slimmer-fitting suits, too. It might not be skinny fit, but it’s slimmer than what they are used to. That’s a cue that [this trend has] reached the mainstream.”

Peter Lee, cofounder of Lee Baron Fashion Ltd., believes slim suits will be in style for another two years. “People are more healthy and slim so no one wants to wear loose clothing on their body. I’m selling almost 99 percent slim-fit suits since three years back.”

So while the looser silhouette and baggier pants might look good on the runways of Milan or Paris, it appears that, for now at least, the majority of men aren’t about to be a slouch.