The line between the eccentric and the tacky is very fine, and season after season, Jeremy Scott has demonstrated his skill at walking that tightrope of taste. 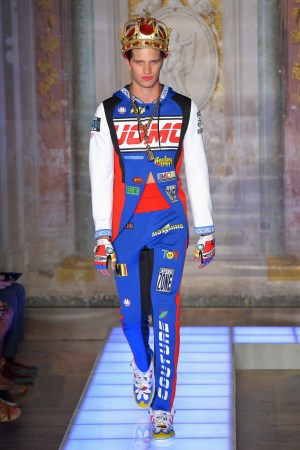 The line between the eccentric and the tacky is very fine, and season after season, Jeremy Scott has demonstrated his skill at walking that tightrope of taste.

Armed with a volcanic creativity and a witty irony, Scott has transformed the Moschino brand into a new entity, and the men’s collection he showcased in Florence’s historic Palazzo Corsini is the fruit of this process.

Channeling inspirations that ranged from Giovanni Casanova and Louis XVI to the Moto GP, Scott created a fun, irreverent collection that shattered the boundaries between casual and formal.

True to his own rules, the American designer created a world of excess where noncoherent elements happily coexist. Parkas embellished with motorcycle race suit logos were juxtaposed with tailcoats decorated with gold embroideries, while a cotton shirt and coordinated denim pants were printed with images of precious gems. Scott also introduced a note of decadent romanticism in the lineup via pieces crafted from opulent brocades, such as a tailcoat with zippers that  transforms into a biker jacket.

Everything was over-the-top and exaggerated, including the massive crowns sported by models, reminiscent of the Burger King monarch.