Number one overall pick Trevor Lawrence set the tone in an Indochino suit that he wore at home.

Logan Bowles/Courtesy of the NFL

The NFL Draft is back to business.

The 2021 NFL Draft began Thursday in Cleveland, led by league commissioner Roger Goodell and super fans supporting their favorite teams, and draftees put on their best suits and tuxedos for the occasion.

Unlike the 2020 NFL Draft that was entirely virtual, this year’s iteration had draftees at home and in Cleveland, like Jacksonville Jaguars number one overall pick and ACC Player of the Year Trevor Lawrence — who wore an olive green Indochino suit with an orange lining, nodding to his alma mater Clemson — at his home with his parents and wife Marissa Mowry, and wide receivers Ja’Marr Chase, Jaylen Waddle and DeVonta Smith, who walked the Cleveland stage selected by the Cincinnati Bengals, Miami Dolphins and Philadelphia Eagles, respectively, among others.

While the NBA Draft has been a formal occasion for years — though the suits have become better fitting over time — the NFL Draft is catching up in terms of style. Last year, athletes attempted style moments at home with outfits by Thom Browne, activewear by Nike, custom suits and even a bathrobe. 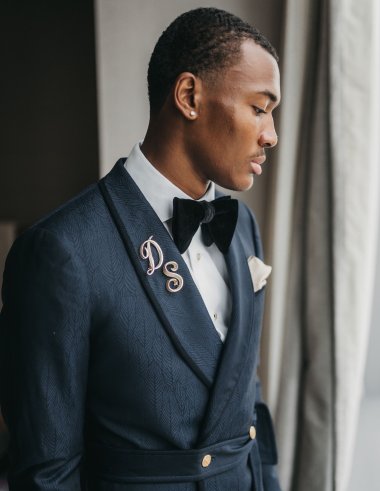 Lawrence partnered on his draft suit with Indochino, which has a history of working with athletes and, in particular, NBA draftees on their suits.

“We wanted to be there front and center and [there was] no better athlete to align with than Trevor,” said Indochino chief executive officer Drew Green. The former Clemson quarterback turned to Indochino for his wedding in April, working with the clothier on his tuxedo and the groomsmen’s outfits, and worked with them again for the biggest moment in his career to date.

Lawrence, the first football player to be dressed by Indochino for the NFL Draft, donned a cotton stretch olive suit, which Green said he took his time on.

“We really focused in on Trevor this year,” Green said. “We’ve partnered with dozens of players throughout the year, but this year we focused on our partnership with Trevor. We think he is a generational athlete. Physical attributes and skills, but he just loves the game. We’re going to look to work with him for a long, long time.”

Indochino hopes to replicate its success with New York Knicks star RJ Barrett, who they entered into a multiyear partnership with in 2019. The company also dressed New York Knicks 2020 Draft pick Obi Toppin, further strengthening their focus on New York City, which Green sees as Indochino’s biggest market. They also partnered with the New York Yankees as the official made-to-measure suit.

Green added that the fourth quarter 2020 and first quarter 2021 for Indochino are way above expectations and the company is “38 to 40 percent ahead of plan,” with plans to open 11 more showrooms by June.

Lawrence is also officially sponsored by Adidas and today revealed a partnership with Fanatics for the licensed sports merchandise and memorabilia company to be his exclusive autographs and collectibles partner. Through this partnership, Fanatics will be the sole distributor of Lawrence’s memorabilia products from his career at Clemson and coming season with the Jacksonville Jaguars.

Even the NFL took part in style by partnering with rapper Kid Cudi on a limited-edition Starter jacket to commemorate this year’s event. The jacket features logo patches of 32 NFL teams. 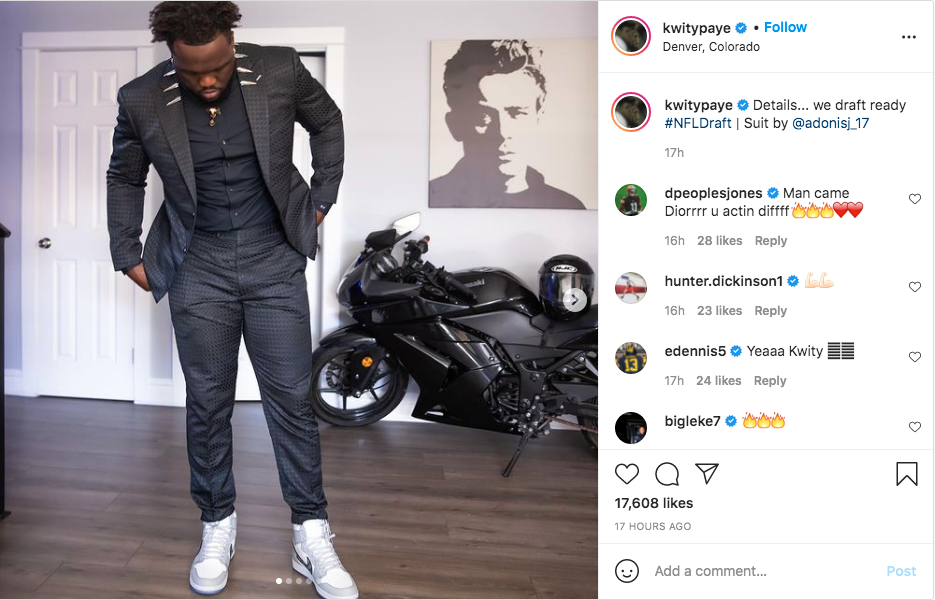 “I love this side of the field,” Jennings said. “I’ve had fun with it and enjoying the moment and letting the guys know that you can do anything you want and speaking to guys in that gray area that don’t know what to do outside of football. This is my way of speaking to these guys and letting them know that anything is possible.”

Jennings, who joined the Green Bay Packers in 2018, said the transition to fashion was difficult because he was so passionate about football, a sport he’s played from as young as five years old, but he found similarities in studying a playbook and studying tailoring and design.

He met Paye and Tennessee Titans pick Caleb Farley on a trip to see friends, and they began a conversation about the NFL Draft.

Jennings said the Black Panther-inspired suit was “me being creative and making pieces that make sense and are personal for each individual.” The suit featured a collar detail similar to King T’Challa’s claw necklace from the film and a purple galaxy lining referencing the purple glow of the character’s suit in the Marvel Cinematic Universe film.

“I think with the amount of players on the team, you have different personalities and background and each guy is going to dress somewhat different,” Jennings said. “The way people dress is a form of expression and a way to express your personality. That’s how I’d say it’s evolving and I’m excited to be a part of it and seeing what these guys have to offer in the future.”