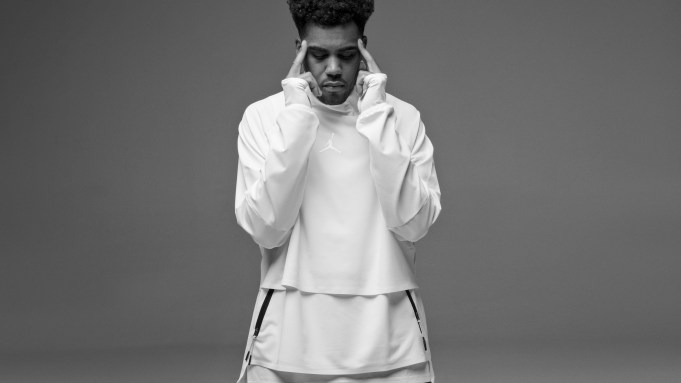 A classic is getting a new spin from Nike.

The Oregon-based athletic company has rebooted one of its stalwart brands for fall, pushing the design envelope to give it a new look and new direction.

“We’re excited about today,” said David Creech, vice president of design for Jordan Brand. “We feel like it’s a new day for Jordan apparel and one of the big reasons why is we have this rich heritage. We’re trying to create a story inspired by our DNA, scripted into new designs to create a design language for the future. So in the past I think we didn’t leverage more of the DNA of our brand like we could.”

Fall aims to change that.

Most of the pieces in the collection bear a wing-like detailing that is a nod to the flight suit Michael Jordan was photographed in, for a detail Creech said sets the tone for future seasons.

Creech was on hand in Los Angeles Thursday evening as the company offered press and influencers previews of the season at an event held at a private residence in the Beverly Glen neighborhood. The collection was on display throughout the home’s first floor and garage where a black-and-white Ferrari sat.

The space also provided a backdrop to show off recent collaborations with the likes of Supreme and Don “Don C” Crawley, all of which are efforts, Creech said, to help give the brand a push into the art, music and cultural words a bit more easily than if it were to go it alone. The company also enlisted Don C to create for its event an art installation of sorts with the bombers from the fall collection, inviting the designer to airbrush away at the jackets.

“It’s about storytelling into the future to give us a distinct edge and point of view,” he said.

The whole collection is black and white, the two colors most coveted among Jordan’s customer base, Creech said.

The design team was pushed to more carefully think about fit, form and function for looks that are functional for activity but with modern enough styling to wear outside of the gym. That’s seen in bombers and coach’s jackets with subtle branding that Creech described as “a bit more tonal, not so loud.” There are also joggers, a hoodie that experiments with high-low proportions, a training top composed of a lightweight stretch material with the wing stitching once again brought in, with many of the pieces able to be layered for outfitting.

“Our kid feels like they want to fly on and off the court so the idea is of innovation and style coming together. The reality is you could wear this to the gym or you could rock it at night,” Creech said. “If we leverage that storytelling of the wings and innovation and bring that into the style of the silhouette, we feel like we have a future as we go forward.”