Designers to look out for at the men's shows in Paris. 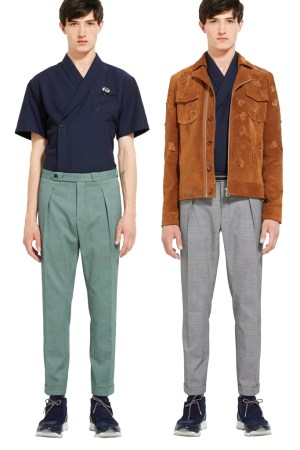 CARVEN: Barnabé Hardy has taken the task of bringing Carven’s men’s wear to the next level. The brand currently operates nine men’s stores, and has 160 wholesale accounts.

“Carven is a bit atypical. It’s an old couture house but there is no DNA yet for men’s wear,” Hardy said, as he prepared his first collection at the firm’s Paris Saint-Germain headquarters. His main goal, he said, is to create “the perfect wardrobe for a guy who’s urban and knows what he wants to wear.”

The designer’s debut collection is strong on fabrics, some of which were developed in-house in an effort to create a new signature. “There is hardly
anything here without texture,” he said, pointing to a crinkled nylon-polyester mix, which gave ample bombers and flowy smocks a lightweight spin.

Knits came in heavy 3-D graphics or were used to make street-chic hybrids — half-blazer, half-cardigan. “I love the fact that you can’t immediately tell what they are — knit or not,” he said.

With Alexander Calder’s mobile sculptures and a blurry shot of Tokyo’s busy streets on the mood board, subtle graphic patterns and Japanese workwear-inspired silhouettes dominate — like a seersucker T-shirt with kimono collar or a cotton jacquard shirt with a reworked gingko-leaf motif, Hardy’s “lucky charm” for the season, as he put it.

Accompanying his debut on June 24 will be a short film directed by Anton Bialas explaining the new Carven man.

Hardy, who cut his teeth at Balenciaga, where he helped the brand’s then-creative director Nicolas Ghesquière launch its first men’s collection, has put his own line of leather jackets “on hold” in order to concentrate on Carven.

XIMON LEE: A graduate of Parsons School of Design, New York-based Chinese designer Ximon Lee has created some buzz in recent months, thanks to the Best Men’s Wear Designer Award he received for his graduation collection and the H&M Design Award he garnered last January. As the first men’s designer to win the Swedish retailer’s prize, Lee’s exaggerated silhouettes constructed like sandwich boards made of a collage of unusual fabrics such plastic and bonded textiles are making a visual impact.

Hong Kong-based Joyce Group has also jumped on board, offering Lee’s collection to its customers as a small capsule under its Joyce x Machine A project.
Lee’s debut collection is based on his graduation line, but in a more easy-to-wear range. Channeling both China and Russia as inspiration, Lee is offering 23 pieces, mainly made out of bonded blue denim and wool with hand-painted copper pinstripes. His big volumes with overblown details and embellished with slogans, such as “Enjoy,” are based on the imagery of the street scene of Moscow and its underground youth culture.

Many of the pieces are unisex. Although technically men’s wear, Lee sees no gender barrier to his clothes — all it takes is for a girl to wear it for it to become women’s wear, he believes.

The Ximonlee collection will be shown at Joyce Gallery, 168-173 Galerie de Valois in the Palais Royal garden from June 27 to 28.

STRATEAS.CARLUCCI: The first Australians to show men’s wear on the Paris runways, Peter Strateas and Mario-Luca Carlucci will unveil their 25-look “Myopia” collection on June 24.

Their three-year-old Strateas.Carlucci brand is known for its gender-ambiguous “constructed” tailoring featuring hidden zippers and inverted lapels, as well as fabric development and a sombre, monochromatic color palette, that is popped with citrus and cobalt.

The starting point for spring was the human eye; the pattern of an iris picked up in the weave of a silk jacquard used in slim tailored trousers, a sporty bomber jacket along with a sweater and oversize hoodie; while a sheer polyurethane-coated cotton mesh has been deployed in an oversize hooded kimono and a collarless, floor-length “robe” coat.

“The fabric is the hero” said Carlucci, pointing also to the laminated Australian virgin merino wool knit jacquard of an oversize raglan-sleeved jacket; a laminated crushed silk used for trenchcoats, and a textured knit seen in a hooded jumper and slouchy top.

THAMANYAH: Ahmed Abdelrahman, a former high-end jewelry consultant for Dior, Van Cleef & Arpels and Bulgari, has lived switching between time zones and cultures, a life that eventually led him to fashion.

“I was traveling so much, I reached a point where I got sick of changing clothes all the time,” he said.

The Dubai-born designer, who studied mechanical engineering, said: “Design for me is about providing a solution to satisfy people’s needs — and my own.”
To bring home that point, the brand’s tops, including suit jackets, feature what Abdelrahman calls “a dislocated shoulder.”

Abdelrahman also breathed new life into the kandora, originally a long-sleeve tunic favored by Arab men, by altering the pattern slightly to include lapels, and working it in pinstriped flannel or cashmere provided by Lanificio Cerruti.

Bottoms include a carefully tailored drop-crotch or are cut with ample legroom, oscillating between street and chic. For spring, Thamanyah is shifting its focus to casualwear.

The collection will include sleeveless cotton jersey tops, and for the first time: denim. The line, kept sober in black, gray, burgundy
and petrol blue, retails between 350 euros, or $394 at current exchange, for a T-shirt to 1,350 euros, or $1,520 for a classic blazer. — P.S.