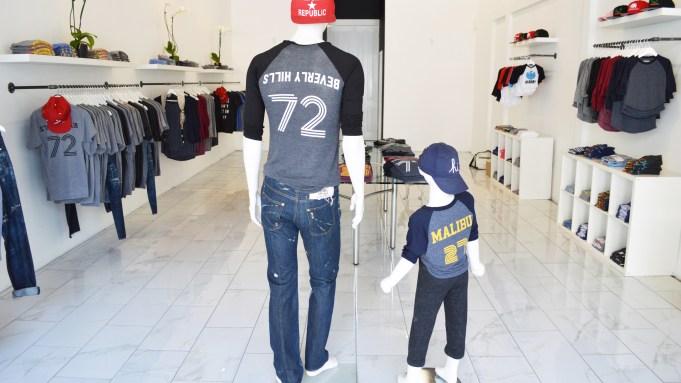 The men’s retailer and designer, who appeared on Marcus Lemonis’ CNBC show “The Profit” with his label DiLascia, is now going after the higher end.

DiLascia, who has long been known for his Southern California lifestyle T-shirts with cheeky sayings such as “Extra” and “Pool Boy,” is now veering toward a full-fledged lifestyle brand with the build-out of a collection that is more than T-shirts, in addition to kids and the infusion of complementary brands into his retail business.

“It’s always been a dream of mine to have a collection rather than just T-shirts so we’re looking at doing higher price points and better fabrics, and it’s not going to be distributed as heavily as DiLascia has been,” the designer said. “When I met with some of my higher-end retailers we were discussing where the market was going. The top retailers in the high end are going to stay. Those lower-end retailers, like H&M and Topshop, are going to stay, and that middle’s going to basically be gone. So DiLascia kind of falls in the middle and I needed to decide where I wanted to go: up or down. And, obviously, I wanted to go up.”

His line, DiLascia, still trades on its own online site run by the Marcus Lemonis Fashion Group with DiLascia handling its wholesale business.

With DiLascia’s Patrick brand, he simultaneously resurrected a new line, e-commerce and brick-and-mortar in downtown Los Angeles’ Historic Core. The door, at 816 S. Main St., is not only open to the public but designed to be a showroom for buyers that’s close enough to the Cooper Design Space, New Mart and California Market Center, but far enough away to be welcome reprieve from the market week bustle.

Retail — physical and online — will eventually carry not only Patrick but items from other brands DiLascia said fit with his line. Currently, he also sells men’s denim via a collaboration with Los Angeles denim brand AMPD, which stands for American Made Premium Denim. There are also men’s straps from Antonio Rivas.

“We’re partnering with other companies and creating things that I think merchandise well with Patrick,” he said. “I want to bring L.A. fashion designers to the forefront of our web site as well so when you’re shopping and you can’t find some obscure brand in Ohio, you can find it through us.”

The newly launched line is currently in more than 50 stores, including majors such as Barneys and Bloomingdale’s along with boutiques such as Kitross, Enda King, Letter J, Please Mom and Rothman’s.

DiLascia eventually sees the potential for more stores, which would function much like the Los Angeles door in serving a dual purpose as retail and warehouse, the latter helping to get web orders to customers even faster.

“It’s one at a time,” he said. “I’m going to focus on this one store, get everything perfect and then go from there, but I think we have the potential to be in a lot of locations.”