Why Designers Are Paying Homage to Pop Smoke

Four capsules launched in July for the late rapper, with proceeds going to charity, and manager Steven Victor wants Dior to be next.

Rapper Pop Smoke would have celebrated his 21st birthday on July 20.

The late rapper, whose real name was Bashar Jackson, was murdered in Los Angeles in February to the shock and dismay of his fans and hip-hop lovers.

This month saw the release of Pop’s debut album and first posthumous project, “Shoot for the Stars, Aim for the Moon,” as well as fashion and apparel tribute collections by friends and admirers in the fashion industry.

Human Made and Palm Angels released collections inspired by the rapper just days apart, and Pop’s friend and designer Ev Bravado dropped a collection for the late rapper’s album, while Vlone re-released products on July 23. Portions of the proceeds from all of the collaborations went to the Pop’s Shoot for the Stars foundation that was founded and is run by his family, and the Victor Victor Foundation led by Steven Victor, founder and chief executive officer of Victor Victor Worldwide.

Prior to the product launches, Virgil Abloh revealed he was designing the album cover for Pop’s debut album, and invited him to attend the Louis Vuitton and Off-White runway shows in Paris.

According to Steven Victor, Pop had ambitions in the fashion world, which makes the collection rollouts this month especially bittersweet. On one hand, the launches celebrate an artist’s body of work that resonate in his hometown of New York City and around the world, but they also celebrate a life that was cut far too short.

“I like all of the collaborations, because it’s everyone’s own interpretation,” Victor said. “Whenever you let people come out with their purest interpretation of things, it’s always going to be good.”

Victor said Pop wanted to design clothes in addition to rap. “I thought it was ambitious,” Victor said. “I would take it in stride super early on and thought let’s focus on the music first and once you’re stable as an artist then let’s dabble. He would always talk about fashion. I thought he was just saying it because it was cool for rappers to say. Then over the months I realized he did have his own sense of style.”

Victor met Pop in February 2019 through Rico Beats, a rep for Pop. “When I met him, I knew there was something special about him as an individual and musically. At the time I wasn’t in the place to sign artists, but I told Rico you should drop everything and solely work on him. I signed him two months later.” 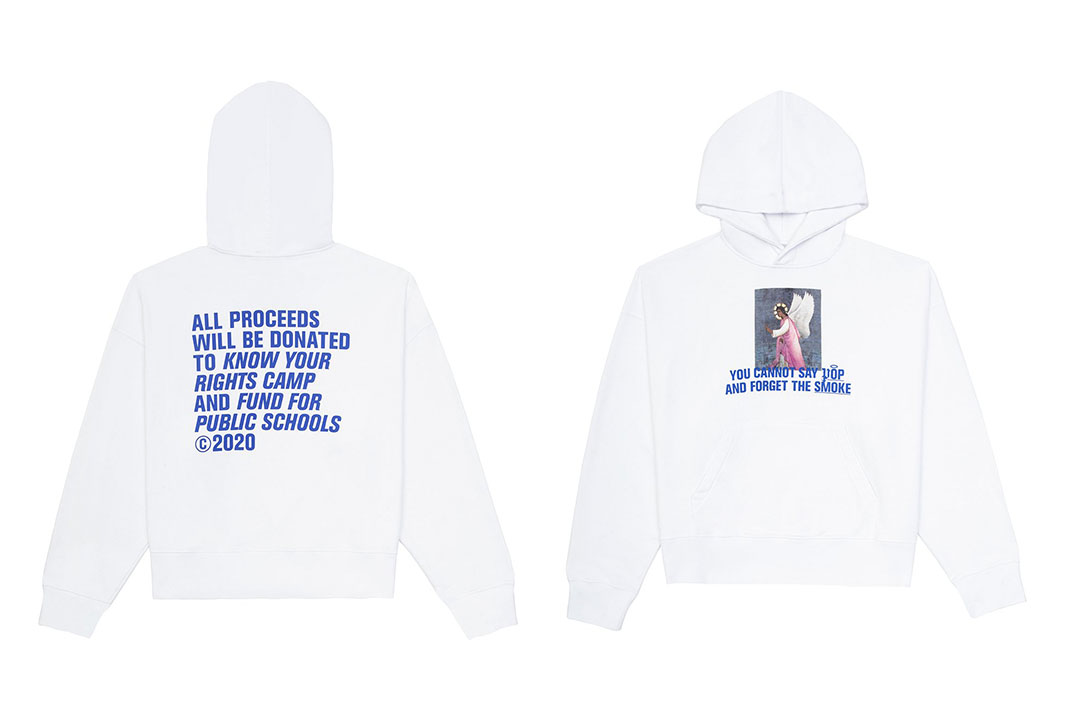 Palm Angels hoodie for Pop Smoke, one of three styles made in tribute to the late rapper.  Courtesy Photo

Pop met Abloh through Victor. “Virgil and I are friends,” he said. “I told him we should figure out a way to work together and, months later, Virgil reached out. He said, ‘I want you guys to sit front row [at Louis Vuitton and Off-White].'”

After the Louis Vuitton show, Abloh decided to shoot a music video with the artist, which was “Shake the Room,” a track with Migos rapper Quavo on Pop’s second mixtape “Meet the Woo 2.” “He came up with the treatment for the video that night,” Victor said.

Abloh was met with some controversy for the album cover he designed for Pop’s debut album. After the designer released it on social media, many shared their displeasure. The first cover had graphics of silver barbed wire and crystal roses around a portrait of Pop that may have been a street-style photo taken in Paris. Fans even designed their own covers and shared on social media. The official cover artwork is a black-and-white flower on a black background, and the deluxe version is similar, but replaces the flower with a dove holding flowers.

“The artwork was such a sensitive subject,” Victor said. “Pop had real respect and appreciation for Virgil for a number of reasons but, most importantly, he represents what Pop believed — that anything is possible. Virgil is the first art-director of African descent for Louis Vuitton — it’s incredible. In everything he did, Pop’s message was, and still is, that anything is possible and he wants kids all over the world to really believe that and to believe in themselves.”

This month, to coincide with the album release on July 3 and the deluxe version on July 20, a number of designers released products in Pop’s honor.

Palm Angels released a tracksuit and a white angel hoodie bearing the phrase “You can’t say Pop and forget the Smoke.” Proceeds will also be donated to Know Your Rights Camp and Fund for Public Schools. Victor said that Pop was a big Palm Angels fan, and he reportedly auditioned for Eddie Huang’s film “Boogie” wearing the brand head-to-toe.

Pop’s relationship with Bravado went deeper than fanhood. Bravado, the designer of Who Decides War, was friends with Pop. “Pop and I connected on some Brooklyn energy,” Bravado said. “I was living in Flatbush when [his single] ‘Welcome to the Party’ was blowing up on Twitter. I saw something in him that’s hard to describe. You could just tell from his aura that he had it.”

Following the rapper’s passing, Bravado imagined what Pop and he could have created together. “We really wanted to do something that speaks to the album and wanted to look toward the future,” he explained. 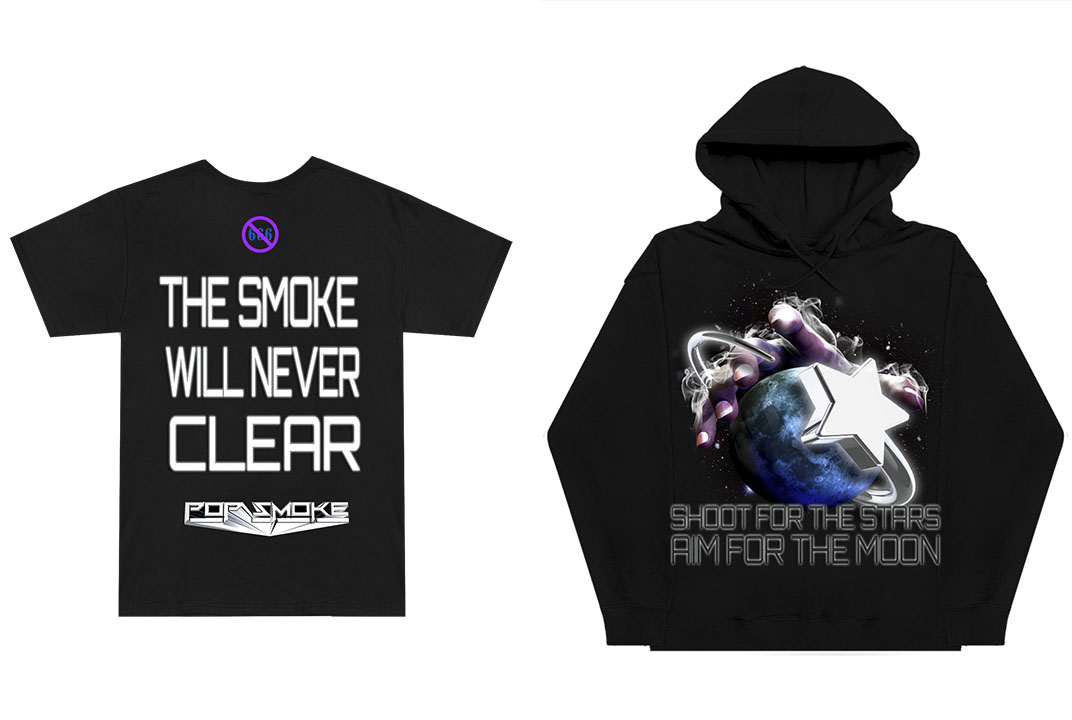 Ev Bravado’s capsule collection for Pop Smoke and his debut album, “Shoot for the Stars, Aim for the Moon.”  Courtesy Photo

The eight-piece collection features co-branding and phrases like “The Smoke will never clear.”

“Not a day goes by where I don’t think of him or miss him,” he said. “Several cars pass a day and they’re playing his music and it’s like he’s here with us. Even though his physical being has passed, he’s still with us in spirit. He accomplished so much and all we can do is celebrate and live in his honor and do right by him and his family.”

Victor did not reveal upcoming collaborations but said he has mixed emotions about them altogether.

“There are other collaborations coming but it is like how much is enough?” he asked. “There’s more dope stuff to put out, but we also want to be conscious of his legacy and that he’s not here. We have to do a lot to keep his legacy going. If he was here we would be selective so it’s a balance of that. Behave like he’s here and factor that in and be mindful of it.”

A collaboration he does want to see is with Dior. “Dior” is a single by Pop Smoke that went platinum in the U.S. appears on all of Pop’s musical projects to date. “You can’t say that Pop didn’t have some sort of influence on Dior especially in the urban community,” Victor said. “I’m going to see [Kim Jones, Dior men’s artistic director] and talk to him about that on some level. Maybe next year for Pop’s birthday.”