“It’s about the traveler,” said Milan Vukmirovic of his first spring collection for Ports 1961. 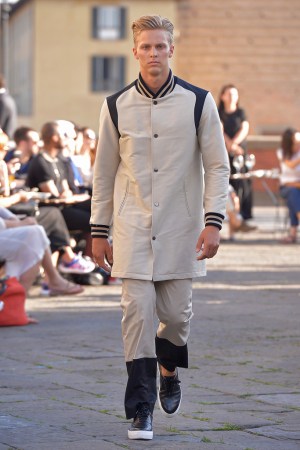 Cross Colours Pops Up at Nordstrom

“It’s about the traveler,” said Milan Vukmirovic of his first spring collection for Ports 1961, which he presented under the Tuscan sun. A picturesque piazza in Florence, overlooking the Arno river, served as a backdrop for a volley of laid-back city looks, targeted for the globe-trotting male.

The designer sent a gang of voyagers to the beach in patchwork denim shirts and comfy carrot jeans (surf boards naturally tucked under their arms), and paired them with a series of tailored sweatpants and Bermuda overalls.

“Fashion is like music: It depends on your mood,” explained Vukmirovic, alluding to the fact that a guy’s personal taste can quickly change, depending on where his travels take him. “When I’m in L.A. I suddenly start wearing suede, just can’t escape it, while Berlin pushes me toward black.”

Naturally, his proposition for spring had ethnic Kilim T-shirts peacefully coexisting with multipocket utility jackets and technical raincoats. Throughout, the silhouettes were relaxed, while color-blocking added visual appeal.