The Power Suit Through the Years

From Beau Brummell to the Beatles and Gordon Gekko, the suit has had many iterations through the decades. 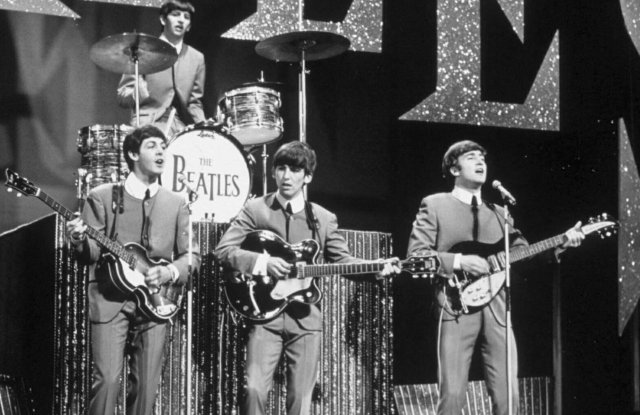 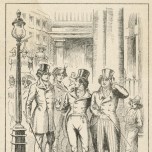 Up until British dandy Beau Brummell upended the dress code in the early 19th century with his somber-toned bespoke garments that were perfectly fitted and paired with long pants, men had embraced colorful matching waistcoats and breeches. Brummell, who is widely viewed as the originator of modern men’s wear, was followed in the Victorian era by men sporting form-fitting frock coats.

In 1886, during the Autumn Ball at the Tuxedo Club in Tuxedo Park, N.Y., members cut the tails off their dinner jackets, following the lead of England’s James Brown Potter, and caused a revolution in formalwear.

In 1901, Brooks Brothers released its No. 1 Sack Suit, a natural shoulder, soft-front construction jacket with straight-leg trousers, that was the suit du jour into the Roaring Twenties when high, notch-lapel tweed, mohair, flannel and corduroy models under full-length raccoon coats became all the rage and sportswear was adopted for daywear.

During the Great Depression, Fred Astaire and others opted for wide, double-breasted suits in somber tones to reflect the times.

By the Forties, the Duke of Windsor was widely seen as a style arbiter with his boldly patterned fabrics, braces, pocket squares and neckwear tied with — what else? — a Windsor knot. And the Zoot Suit, a high-waisted, wide-leg, pegged trouser worn with a jacket with wide lapels and padded shoulders — topped off with a fedora — became popular among the African-American community and soon spread to other cultures.

In the following decade, men embraced the outfits popularized by Gregory Peck in the 1956 film, “The Man in the Gray Flannel Suit.” And who could forget Cary Grant, the Hollywood leading man who redefined suave and debonair style with his simple yet elegant suits and furnishings.

And thanks in large part to the Fab Four from the U.K., the suit became cool with the younger generation when the Beatles stormed onto the scene in their skinny, collarless suits, Chelsea boots and mop-top haircuts.

By the Seventies, it was John Travolta’s three-piece white suit in “Saturday Night Fever” that became emblematic of the decade. But it wasn’t until Richard Gere donned Giorgio Armani’s generously cut, lightweight and relaxed suits and sport coats in 1980’s “American Gigolo” that the power suit really took hold in modern times. A few years later, Alan Flusser offered up his interpretation of corporate raider Gordon Gekko in “Wall Street,” dressing Michael Douglas in a way that was intended to reflect power and aggression — and came to symbolize the era of “Bonfire of the Vanities.”

In the Nineties, the suit was widely replaced by “business casual,” which often led to ill-fated choices such as khakis and golf shirts. But it reemerged in the Aughts with designers such as Hedi Slimane and Thom Browne offering up super-skinny options and cropped pants.

So the question is: what does the power suit of 2020 look like?

Men’s wear authority G. Bruce Boyer, the one-time fashion editor for GQ, Esquire and Town & Country, said that while the power suit has had many iterations over the years, its message has always been the same: “When you walk in, it says, ‘I’m in charge.’ That’s the essence of the power suit.” The 2020 version will be looser than the skinny silhouette that was so in style a decade ago, finely tailored with a soft, slightly extended shoulder, pinched waist, slightly longer jacket and pants that are pleated and tapered at the bottom. Fabrics will be mainly natural fibers — “People don’t want to put oil-based cloth back into the environment,” he said. — and will include flannels, tweeds and linens, he predicted.

For custom tailor and author Alan Flusser, it’s less about the suit and more about the man wearing it.

“There is a powerful way to wear a suit,” he said. “With Michael Douglas, it wasn’t about the suit itself but how he wore it. It gave him a sense of power. Like Douglas Fairbanks, Gary Cooper, Fred Astaire, the Duke of Windsor and Michael Douglas, it came from within. It’s not something that is easy to teach.”

With many young people embracing a more-tailored aesthetic for fall, and so many unemployed men out in the market looking for jobs, Flusser believes there will be a “renaissance of suits” later this year. “That always happens after financial disasters.”

In addition to traditional suits, he believes the jacket will also be popular. Calling it the most flattering piece of apparel for a man, the jacket can highlight his shoulders, offer a slimming effect and even make a guy look taller. “There are lots of cult forces at work against the suit,” he said, “but there’s strength of a jacket for office work.” And younger guys are more skilled and comfortable putting together a sophisticated outfit with a jacket as the centerpiece.

But the traditional suit can offer men an option that is still unparalleled. In a recent blog post, Flusser wrote: “The classically cut suit will always offer a man a vision of himself that no other housing can. It’s hard to foresee a time when a man will not want to be reminded of his most debonair self. There’s a moment after putting on a fine suit appointed with the right finery when you turn to look in the mirror and flash back to a moment of discovery, like when you first saw Paris at night or had your first martini.

“So far the fashion world, after many, many decades in the making, has yet to come up with a credible alternative to the man peacocked in all his suit-silhouetted regalia. Call me a sartorial romantic, but I am prepared to bet the proverbial bankbook that they never will, and the world will be better for it.”