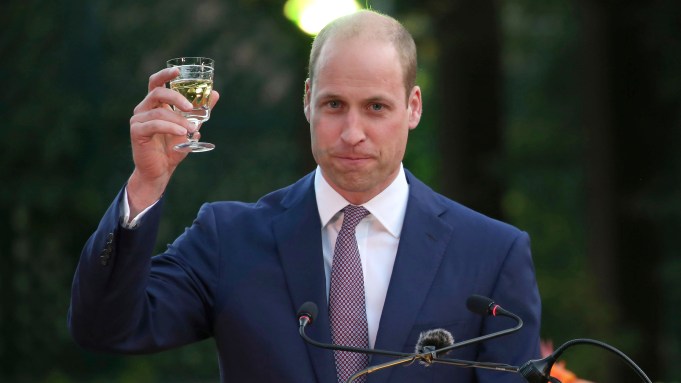 But there are no bells and whistles for the future king of the United Kingdom on his milestone birthday. Instead of a fancy new portrait by a renowned photographer or artist, he’s chosen something more powerful — being one with his people.

The Duke of Cambridge took to his family Instagram account the night before his big birthday to share a photo of himself on the cover of “The Big Issue,” a street newspaper that offers homeless people an opportunity to work and earn income.

“I was 11 when I first visited @passagecharity with my mother and since then, homelessness has stuck with me as an issue I want to fight for,” he said in another post. “I have always believed in using my platform to help bring attention and action to those who are struggling and I commit to doing what I can to shine a spotlight on this solvable issue not just today, but in the months and years to come.”

On Tuesday, he spent the day with Dave Martin, the veteran “Big Issue” vendor. The royal was dressed in a moss green shirt, navy chinos and suede shoes, the wardrobe of a future king who’s firmly signaling he doesn’t need the emperor’s new clothes.

It’s clear that the prince knows the monarchy has to move on and adjust to the times rather than tending to the archaic ideology of what royalty should look like. And it’s something that his late mother Diana, Princess of Wales was well aware of that has been passed down to her sons and daughter in laws.

Unlike both his parents, William has shied away from stylish sartorial matters rather than allowing them to shape his image, as Diana did with the help of Gianni Versace, Victor Edelstein, Catherine Walker and many more.

Meanwhile, Charles has embraced being an avid dresser in his Savile Row suits from Anderson & Sheppard and Gieves & Hawkes. In 2020, he even launched a sustainable fashion collection with Yoox Net-a-porter via his education and community-focused charity, The Prince’s Foundation.

“Fashion per se isn’t necessary for a future king, but a strong sense of style is. The Queen never looks fashionable, but she has a recognizable signature look. And that is important for a monarch today and always. He needs to look like his own man, he needs to look as if he’s self-aware,” said Jeremy Langmead, author of “Vain Glorious: A Shameless Guide for Men Who Want to Look Their Best.”

“And frankly, why should it be left to the royal wives to make all the effort? The men should have to up their ante, too.”

The Millennial king-to-be is playing a strategic game that’s going to benefit him in the long run to be taken more seriously. “Forty is the age when you become more comfortable in your own skin, when you’re more at peace with how you appear, and less eager to dress just to please others,” said Langmead, detailing that William’s forties offer an opportunity for him to grow more confident and daring.

“He just needs to avoid dressing blandly, or like our politicians. Whether in or out of ceremonial dress, he needs a certain sartorial stature.”

When the Duchess of Cambridge turned 40 in January, three portraits by esteemed fashion photographer Paolo Roversi were released as part of the celebration.

In the following months, she embarked on a fashion metamorphosis, from making an appearance at London’s Design Museum to hand out the Queen Elizabeth II Award for British Design to wearing strictly British designers over the Jubilee weekend.

It’s clear that William and Kate’s marriage and roles within the monarchy are balanced without stepping on each other’s spotlights.