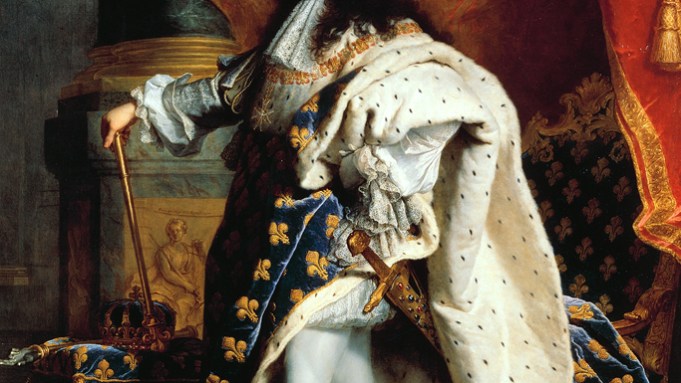 A silk blouse with its floppy pussy bow buttoned seductively up the back. A shrunken military jacket with sleeves that end slightly past the elbow, revealing dainty wrists.

These were elements of the fall men’s collection at Gucci, where new creative director Alessandro Michele became the latest designer to propose overtly feminine clothes for men—his shown on a cast of wan, androgynous models who strolled out in fur-lined slippers.

Meanwhile, in Florence as guest editor of the Pitti Uomo show, Hood by Air’s Shayne Oliver lived up to his reputation for deviant, gender-bending extremes. His models wore pantyhose crudely scribbled with eyebrows, obscuring their sex. The men wore high-heeled, square-toe platform clodhoppers and dresses slit to the crotch.

The season raised a major question: Is fashion finally crossing over to some unisex utopia, or is androgyny nothing more than a flavor of the month designed to shift more clothes, bags and shoes until the next trend comes along?

Designers and retailers are of several minds, with some citing a convergence of trends for both sexes and others shrugging off androgyny as a tired idea and a nonissue. Still, most agree that the dalliance with more daring looks that was previously the domain of women underscores that it’s an exciting time for men’s fashion, with designers and consumers more willing to experiment than ever before.

“I don’t think it’s necessary to switch too much for men’s and women’s because I think that men and women are not so different,” says Gucci’s Michele. “They are different, but in some way you can create a world that is for both. I love that a girl can try to be in the dress of a man, and that a man can try to choose something from the women’s wardrobe. It’s quite modern.”

Alber Elbaz and Lucas Ossendrijver, head of men’s design at Lanvin, have been stretching the boundaries of men’s wear since 2006, when they began importing Elbaz’s sumptuous fabrics and couture draping into men’s wear. Among their propositions for fall 2007 were fuchsia or purple satin jogging suits and high-tops.

“We got criticized for it, but they were bestsellers, and now those kind of items are quite normal,” Ossendrijver recalls. “I’m not saying men should dress like women, but sometimes men are so considered with their masculinity. I wish we would have more real options than just the suit, shirt and sweatshirt. I like the idea of stretching these definitions.”

According to Ossendrijver, the growing importance of women’s pre-collections is partly fueling the trend toward coed shows—and similar styling and fabrications in men’s and women’s collections given the proximity of production cycles. This is particularly the case for the fall season, when the men’s shows overlap with pre-fall women’s wear and run smack into spring couture.

Beyond that, Ossendrijver argues that men’s wear has changed dramatically in recent years.

“The way men look at fashion and consume fashion is radically different from what it was before. They’re no longer afraid to also enjoy fashion. It’s no longer just functional. Design has become much more important, men also buy more intuitively,” he explains. “They really shop, and not, like before, just once a season. So the way they consume is becoming more like how women consume fashion. There’s more equality in that sense.”

Thom Browne, prone to showing men in skirts, dresses and even lipstick, says he doesn’t think about his fashions in the context of androgyny.

Indeed, his men’s and women’s collections for fall stemmed from the same inspiration—death—and had many of the same elements, with both sexes donning mourning-style garb and even carrying the same bags, in one case a humorous whale-shaped style.

In his estimation, men are more informed and knowledgeable about clothes than they’ve been in the past.

To be sure, men in skirts is old hat, with Jean Paul Gaultier first stirring that pot back in 1984, unveiling looks inspired by the aprons worn by French waiters.

Browne explains that he approaches his collections for both genders in the same way. “I think that tailoring looks great for both men and women and that is where both collections stem from,” he says.
Berlin-based Kostas Murkudis is of a similar mind.

“I don’t believe in unisex,” says the designer, who unveiled a new “inter-gender” collection during men’s fashion week in Paris, offering versions of leather vests, full-legged pants and blousons for both sexes. “I believe in the freedom to decide the way we want to present ourselves and the way we want to communicate. It does not mean that we are aiming to look all the same—nor that we want to deny our bodies.”

Murkudis notes that women have been borrowing from the boys, and vice versa, since Ancient Greece, and Asian cultures today offer a wider spectrum of garments for men.

“I like the idea of wearing a skirt or a djellaba during summertime,” he admits. “I also love to wear Japanese kimonos and other Japanese garments during my daily work schedule.”

In his estimation, beautiful garments assume a different aspect and character when worn by a man or a woman. “The body fit is creating a new sensation—very inspiring,” he says, noting the “same sensation happens due to the use of fabrics and colors.”

According to Ossendrijver, “there’s still a long way to go; women have much more choice. Though moving and going forward, men’s fashion is still restrictive. Especially when you look at what men really wear in everyday life and not just the catwalk. Men are definitely more open to experiment; the way they dress is not just practical anymore, but more and more a way to communicate their identity or who they want to be. That’s what I love about fashion; it gives you the possibility to be who you want to be,” he says. “It’s not even about masculinity. It was about raw and powerful pieces that were abrupt styling and techniques of looking a certain way, and also what social meaning pieces have in general. Why the product is talking to you.”
Retailers agree young fashion devotees have no qualms about shopping across men’s and women’s departments.

“The lines are blurring,” says Terry Betts, Selfridges’ men’s merchandising and buying director. “As a retailer, I feel really positive that we’re providing a space of diversity in fashion.”

In fact, a good percentage of shoppers in Selfridges’ men’s streetwear section are women, and male consumers also comb women’s departments. “There’s definitely a freer way to shop,” Betts says. “There’s a fluidity. We see it also as the next stage of retail. That customer really comes into the store with no rules about how to put things together.”

Agender marks the first time the British retailer has featured clothes in its windows without mannequins, to avoid a specific body shape. For its e-commerce site, all looks were photographed on a male and a female model.

“The idea of coed clothing has been a long time coming. You’re just going to see more of it if you flash forward,” says Jeffrey Kalinsky, founder and president of Jeffrey, which has locations in Atlanta and New York City. “I just think it’s a sign of being more open-minded to possibilities. Men who work in fashion and men who are into fashion, they’re not interested in the restrictions.”

Kalinsky mentions Rick Owens, Givenchy, Comme des Garçons and J.W. Anderson among labels that stretch the boundaries, with J.W. designer Jonathan Anderson a leading proponent. “Jonathan sees that you don’t have to draw such a fine line in fashion between what a man may wear and a woman may want.”

Kalinsky says he intends to hang Raf Simons’ men’s collection in his women’s department, and among must-haves for fall he lists Givenchy’s skirts, which designer Riccardo Tisci styled over pants. “Shown on very masculine models, it was very sexy,” he says. “Whoever buys them will sell all of them.”

“We had a very big androgyny trend in the Nineties with Calvin Klein, who had men and women dress in a pair of jeans and a white T-shirt wearing the same perfume. Then Dior Homme, headed by Hedi Slimane, did suits for women. But now it’s different. It’s more of an exchange between men and women at the moment. It’s like a game,” Sartres says. “Women’s wear has progressed a lot thanks to men’s wear.”

Yet she’s not sure men are becoming more feminized.

“When men pick something from a woman’s wardrobe, they are reinterpreting it according to their own codes. A pair of leggings quickly turns sporty, not feminine. We saw skirts on men at Dries Van Noten, but they were worn on top of pants. Men are keeping their masculinity. In fact, they feel very much at ease with it,” she says.

Still, men “need a story to buy into a brand; they don’t buy three pairs of shoes to feel better, they want to know where the product was made, they go for the savoir faire, and they like technical things like watches and jewelry. They have no problem wearing a bracelet, which could be considered feminine, but it needs to be clean and sober, without any embellishments.”

Tisci recalls that he raised eyebrows with a men’s show and campaign in 2010 that featured transsexual Lea T, a Brazilian model with delicate features who was previously known as Leo. But he was happy to make the politically charged statement and remains puzzled by people who draw indelible lines between genders.

1950s:
Liberace’s outlandish use of sequins, fur trim and capes make him one of the pillars of androgyny.

1970s:
David Bowie was the poster boy of the glam- rock era with his Ziggy Stardust alter ego.