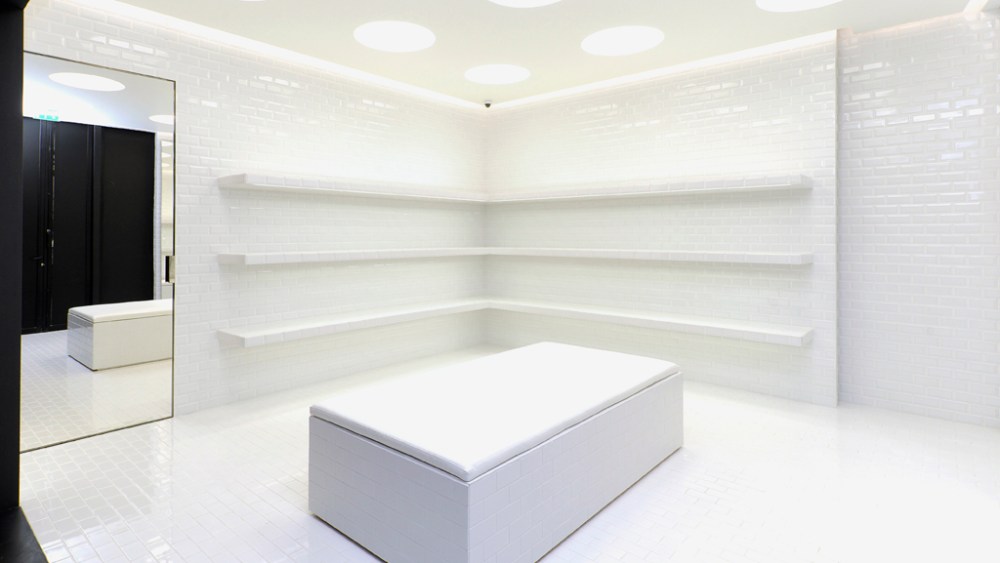 PARIS — Riccardo Tisci can add lead architect to his list of accomplishments at Givenchy.

The brand’s new men’s flagship in the Marais district here, slated to open to the public today, was conceived by the 40-year-old couturier and underscores how far he has propelled the men’s business, which now accounts for half of Givenchy’s revenues.

Not bad, considering Tisci was a complete newbie when he introduced his first men’s collection for spring 2009, igniting trends to athleticism and androgyny that continue to influence the industry — and drive Givenchy.

“We see men’s as a very strategic business,” said Philippe Fortunato, Givenchy’s chairman and chief executive officer, citing dynamic sales not only in established Western markets, where the brand has historic resonance, but emerging ones as well, particularly China and Korea. “The younger generation is spending much more on themselves.”

While he declined to give first-year sales projections for the 5,000-square-foot unit, Fortunato said: “We have high expectations for this store…It’s the achievement of a well-performing men’s business.”

Givenchy is also zeroing in on a lease for a boutique in London, slated to open in 2016.

The trio of high-profile openings point to the broad swaths of geography Givenchy has yet to exploit. Still, Fortunato described a “careful and focused” retail strategy hinged on city-specific store concepts.

Givenchy remains a wholesale-driven business, but its retail channel is on track to reach the 50 percent threshold in the next two or three years, he noted.

The brand closed out 2014 with about 50 directly operated stores and corners, including 14 in Japan that were operated by a partner until last fall.

“We have a relatively small footprint,” Fortunato said. “Givenchy is a complex brand. It’s not to be replicated too fast everywhere because you need to have the right merchandising and the right group of people selling it, because our customers are very sophisticated and very demanding.”

The New York flagship will be only the third freestanding store in America, the others being in Las Vegas and Miami’s Design District, also opening this week. “The United States is very strong for us,” Fortunato noted. “Riccardo is very inspired by the American dream and the world of celebrities and opinion leaders there.”

The Marais unit is close to Tisci’s heart, since he is a longtime resident of the trendy district.

Fortunato said the neighborhood — a pre-revolution hub for the French aristocracy, and later an area popular with artisans, blue-collar workers and minority groups including Jews, Chinese and the gay community — nicely dovetails with Givenchy’s brand narrative: a couture house that Tisci has modernized with his come-one-come-all ethos and collections influenced by his travels.

“What’s amazing about Riccardo is that everything he does is in keeping with the brand history,” Fortunato said. “It’s very reassuring for the consumers because they feel the consistency.”

While Tisci has been involved in all store designs since he joined the brand 10 years ago and has collaborated with architects Jamie Fobert and Joseph Dirand, the Marais unit reflects his personal passion for interiors and landmark Italian designers from the Sixties and Seventies including Carlo Mollino.

Collaborating with Givenchy’s internal teams on the Marais site, one of several designer men’s boutiques sprouting on the Rue des Archives, Tisci created a range of atmospheres: A “chic, elegant” entry salon appointed with dark, polished wood and green silk walls; an all-white space paved in white subway tiles, and a suite of grittier rooms upstairs, with walls left raw but the point de Hongrie buffed to a high shine. Throughout are select furnishings, including a giant Persian carpet laid out in one room, foreshadowing the arrival of a Givenchy fall collection that bears similar tapestry patterns.

“In each room, you have a different journey, but altogether when you look at it, you feel that you’re in a Givenchy world,” Tisci said.

Foreshadowing future Givenchy boutiques, the Marias unit has a residential feeling and a layout suggesting a grand Parisian apartment. “You see that the building was once the home of a well-to-do family, transformed over different layers of history into something very modern,” is how Fortunato described the outcome.

The Marais unit is the third freestanding Givenchy men’s store; the others are on Rue François 1er in Paris and at the IFC in Hong Kong.

Fortunato said the Marais unit could inform future men’s-only units, though most boutiques showcase product universes for both sexes as “Riccardo sees his collections as one” and “we have a lot of cross-gender shopping,” said the ceo.

Shoppers alight upon the most “couture” of Givenchy men’s offering: classic suits and formalwear, plus more formal and business-appropriate leather goods. The two-level store invites exploration through salons devoted to backpacks, sneakers and T-shirts; small accessories, and runway collections.

Fortunato described the men’s business as “well-balanced” between ready-to-wear and leather goods, the latter category logging triple-digit momentum thanks to Tisci’s penchant for in-demand backpacks, sneakers and “statement” casual bags.

Fortunato declined to give precise figures, but described the business as “very healthy” and Givenchy as “a very strategic brand for LVMH and we want to develop it at the right speed.”

He said the brand logged “high double-digit” growth in 2014 “and the first months of 2015 are trending well.”

Tisci is slated to show his fall collection for women on Sunday.