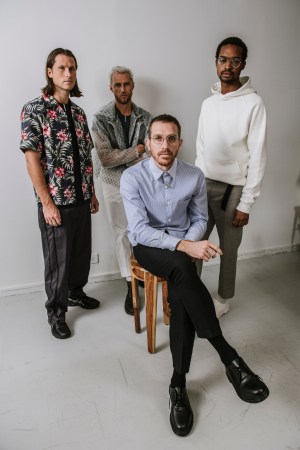 An American in Milan: 424’s Guillermo Andrade on the Future of the Brand, Streetwear

NEW YORK — As evidenced by New York Fashion Week: Men’s, the city has become a hotbed for young men’s wear brands with big ambitions. Robert Childs is part of this crowded group, but his background lends him a special distinction: He’s one of the first designers from Thom Browne’s studio to create his own label.

With help from brand director Matthew Foley, who also used to work for Browne, the designer is solely focused on realizing his own vision with Childs, his self-funded men’s wear line that’s in its second season.

“I feel like I’m really good at interpreting other people’s ideas and I really wanted to do that for myself,” Childs told WWD. “I wanted to test myself and find my voice and see if I could get other people interested in it.”

Childs’ voice started to form in Key West, Fla., where he was raised by his mother, who was an artist, and his father, who worked in general construction. He spent his childhood and teenage years playing sports, primarily soccer, and spending a lot of time surfing or wakeboarding.

“I’ve always really liked clothes, but I never thought about the idea of becoming a fashion designer,” said Childs, who initially wanted to work for a surf brand like Volcom. “Key West is an island in the middle of the ocean and we are kind of cut off from everything. Once I moved to New York I became interested in more elevated, elegant pieces.”

After graduating from high school in Florida, Childs enrolled in business school — he eventually dropped out — before moving to Manhattan to attend the Fashion Institute of Technology. During his last year in the men’s wear program he interned for Adam Kimmel before making his way to Thom Browne’s headquarters, which was located in the same building as Kimmel’s office.

“I kind of just went downstairs, knocked on the door and handed over my résumé,” said Childs. “I remember opening the door and just seeing a bunch of people in suits and I thought, ‘Wow. This is new and interesting.’ He gave me a call and we set up a meeting and he hired me.”

The 30-year-old spent four years working as design director for Browne, which meant helping him articulate his very specific brand ethos. Childs said Browne taught him the importance of producing quality clothes and sticking to a vision, which, funnily enough, Browne noticed in Childs early on.

“Robert is a really good designer who has a specific point of view. And I think that his point of view is true to who he is as a person, which makes it strong,” said Browne. “I am really proud of Robert just as [I am of] any employee of mine who goes on to do his own thing.” Post-working for Browne, Childs rejoined the design team at Adam Kimmel, and once Kimmel stopped producing his men’s wear collection in 2012, he moved on to Opening Ceremony, where he was head of men’s design.

Childs is now attempting to hit that sometimes-hard-to-achieve sweet spot in men’s wear. He wants his collection to be palatable enough for many guys to wear and understand, but special enough for a fashion-forward consumer to appreciate. He’s a stickler for tailoring, but is also concerned with comfort.

“I don’t want anything to be too oversized or too tight,” said the designer when asked about the premise for his collection. “The line isn’t based on vintage pieces, but I want it to feel recognizable. At the same time it’s not a futurist collection. It’s meant to be current and classic so you don’t feel weird about pairing it with crazier things or basic things. But it shouldn’t be too trendy.”

According to Childs, his process begins with creating a uniform for an archetypical guy. Last season it was Robert Redford’s character in the spy movie “Three Days of the Condor,” and for his spring offering, which he presented in his Lower East Side studio and apartment, he created his take on a sailor’s uniform.

“I’m trying to imagine what that uniform would be instead of looking at what it is,” said Childs.

In his view, a sailor wears well-constructed T-shirts and sweatshirts along with cropped parkas, Hawaiian shirts, translucent rain jackets, shirts with removable collars, slightly shrunken suits and a one-piece reminiscent of fishermen’s overalls. Childs also collaborated with artist Zoe Barcza on the prints for the line, which call to mind ripped sails. The collection, which is made in Japan and the U.S., retails from $200 for a T-shirt to $2,000 for outerwear.

So far Childs’ concept is winning over retailers including Totokaelo, Neighbour in Vancouver and Contraband in Canada, who have each picked up his fall collection. Childs said he’s launching an e-commerce site before the year is over, but, similar to how Browne’s career evolved, he has no interest in a rapid rise to the top.

“I respect Thom so much for what he has done and where he has gone and the path that he’s taken,” Childs said. “I think my path might be tougher, but who knows. I want to be a household name, but I don’t want to peak too early.”