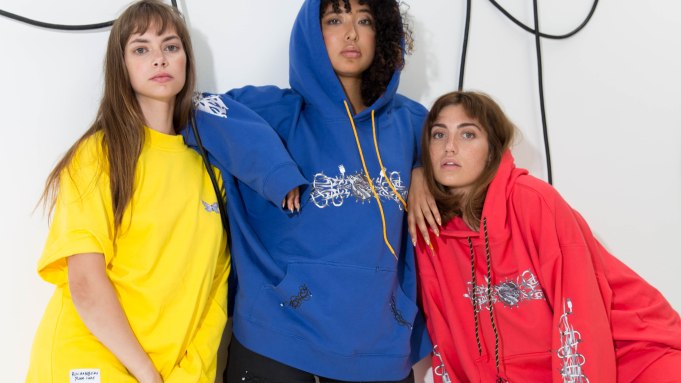 The collaborations have been good for men’s streetwear-inspired brand Rochambeau.

The New York-based company has found success in teaming with a variety of artists on capsules between seasons with the most recent linking Rochambeau with Los Angeles artist and rapper Yung Jake, whose real name is Jake Patterson, on a capsule.

“One of the things we’ve really been focusing on is working with contemporary artists,” said Rochambeau designer Laurence Chandler. “We’re realizing that little in-between capsules are great for both retail and for some of our stores. Jake is an amazingly talented contemporary artist.”

The collaboration with Patterson followed Rochambeau’s partnering with Mark Mothersbaugh of Devo for fall. The company was also a finalist in the CFDA/Vogue Fashion Fund and winner of the International Woolmark Prize. Its line is sold in stores such as FourTwoFour, Harvey Nichols, Revolve Man and Storm.

The brand linked with Patterson, a recent graduate of the California Institute of the Arts, on an edited capsule of six styles in five colorways for the Made Los Angeles fashion, music and retail festival that ended Saturday with performances and fashion shows from Patterson, Snoop Dogg and Wiz Khalifa, among others.

The collection, which Chandler said they’re calling “Rochambeau and Yung Jake: Art, Sweatsuits, Rap,” played with primary colors and shapes, giving boxy cuts to hoodies or shirts with different sleeve lengths decorated with graphics such as tribal or dragon designs from the Nineties, along with technology references in the way of CDs and USB cords Chandler called “tongue in cheek.”

“It’s got a Nineties era techie element to it and then the cuts are distorted,” he said.

Pieces in the capsule were treated as an edition, with each item labeled and numbered. The collection will not go to wholesale and will next be shown during New York Fashion Week Men’s.

Rochambeau also had a shop at Made’s marketplace for independent designers and small businesses throughout the two-day event. Rochambeau’s booth aimed to function as both store and art installation. The panels outside the booth, with references to Mario from the Nintendo video game Mario Brothers, will go on to Patterson’s solo exhibition at Steve Turner, a contemporary art gallery in Los Angeles. The exhibition, which bows June 17, marks Patterson’s fifth solo exhibition at Steve Turner and is titled “Caution: Wet Floor.”