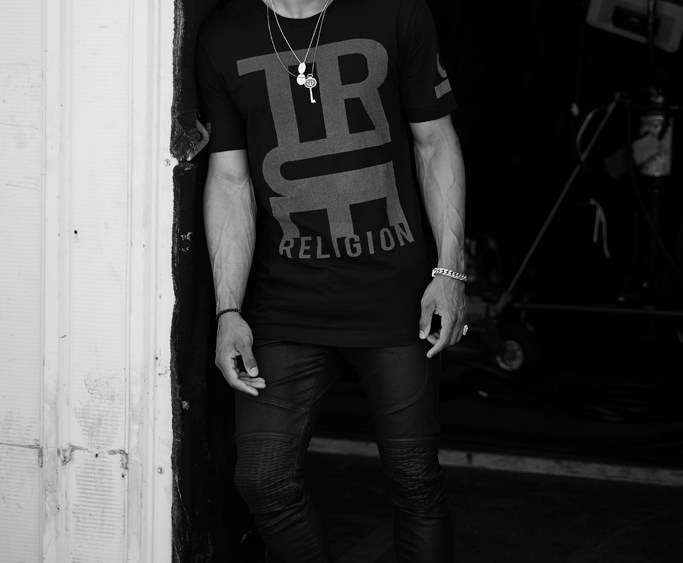 “That’s my shoe!” proclaimed Russell Westbrook, perched on a makeup chair at a cavernous soundstage in Los Angeles.

Sounding more proud than territorial, the Oklahoma City Thunder point guard didn’t mind that a visitor was touching the pristine white high-tops he designed for Nike’s Jordan brand, arranged neatly next to sneakers from Christian Louboutin and Giuseppe Zanotti. Available in stores on July 11, the Jordans mix leather embossed in an alligator skin pattern with a gold triangle-shaped charm that was etched with a phrase barely legible to the naked eye.

“‘Why not?’” Westbrook informed the curious. “That’s my mantra.”

“Why not?” also sums up Westbrook’s approach to fashion. From creating shoes to serving as brand ambassador for 150-year-old Swiss watch manufacturer Zenith to designing underwear with Kings & Jaxs, the 26-year-old found another outlet for his creativity in the second advertising campaign for True Religion that he filmed recently. Once again assuming the title of campaign creative director, he pulled pieces from the holiday collection enhanced with reflective strips that glowed under a camera flash. Westbrook’s task was to put together outfits and, in his words, “find ways to make it come to life.”

That meant tugging at a silver necklace wrapped around his taut neck for Warwick Saint’s camera, which was trained on Westbrook’s black biker-inspired jeans and black graphic T-shirt. “I want tension in the body,” Saint barked at him. Ordering Westbrook to bend his knees slightly, legs apart with arms raised as if he were about to shoot a three pointer in the dimly lit photo studio, Saint yelled, “Your frame looks really strong. Badass!”

Later, in another set of skinny jeans and tight top showing off his 6-foot, 3-inch 200-pound physique, Westbrook hurled himself into the air for a GIF-like video captured by 90 cameras directed by Olivier Gondry.

“This is a guy, on the court, who’s always moving,” said Teresa Riva, True Religion’s director of marketing. In contrast to the spring ads that showed Westbrook sauntering in True Religion togs in front of shifting scenery from various neighborhoods in Oklahoma City, the holiday campaign breaking Oct. 8 in GQ, Complex and possibly TV “is his merging of his day job and his love of fashion and style,” she said.

The convergence eventually could result in a design project between the Los Angeles-based denim company and Westbrook. He already requested its designers to square off the high-low hems on tees so that they were long enough to skim his upper thighs.

“I can’t confirm or deny [that he’ll design for True Religion],” Riva said. “He’s definitely going to be a partner with us in the future.”

Resting between takes at the photo shoot, Westbrook said, “Fashion is a huge part of what I want to do after I’m done playing basketball. In the process of this whole creative director thing, my job is to find ways to obviously be creative, to find ways to express how I’m feeling and express what I’m thinking.”

Kanye West recently griped that “fashion has to be the hardest high school that [he] ever entered” but for Westbrook, judging by the steps he’s taking to build his own fashion business, the coursework has been relatively easy. If the fashion industry were a high school, he is the freshman that possesses the talent and swagger to make the cut for the varsity team, but understands he still needs to learn from the seniors to improve his game.

Those team captains include Vogue editor in chief Anna Wintour, who held court next to him in the front row at the spring 2014 fashion shows for Rag & Bone and Altuzarra, and Barneys New York’s Tom Kalenderian, who has been collaborating with him on an ongoing collection, dubbed Westbrook Exclusively Ours Barneys New York, which premiered last fall.

Westbrook also has visited Olivier Rousteing in the Balmain showroom in Paris and taken a selfie with Carine Roitfeld, all of which he documented for his 2.3 million followers on Instagram. During the last New York Fashion Week, he welcomed John Targon of Baja East, Simon Spurr and Rachel Roy, among others, to a dinner he hosted. He also documented his excursions at the recent men’s shows in Milan in a diary for Vanity Fair’s Web site.

“I’ve been blessed, just being able to meet different people across the world. People introduce me to different designers, different editors, different bloggers, whoever it may be to put me in a position to be successful,” Westbrook said. “Moving forward, I just try to take advantage of it as much as I can.”

In his zeal to introduce himself to the fashion industry, he’s risked being overexposed. His sartorial trajectory has been tracked in L’Uomo Vogue, Flaunt, Complex, Vogue, V Man, the style pages of national newspapers and a tribute Tumblr titled “Russell Westbrook’s Wardrobe,” which states that its singular purpose is to chronicle his “zany fashion stylings.”

The more zany his ensembles are, the more polarizing the reactions from his fans. The comments from his Instagram followers, once they spotted his recent selfie in a green Koto poncho, sun-bleached distressed skinny jeans from Zara and pointy ankle boots by Asos at Milan Fashion Week, swung from admirable (“pure class and swag”) to aghast (“WTF BASKETBALL PLAYERS BE ON THESE DAYS”).

Pleading ignorance to the Tumblr page honoring him, Westbrook said he doesn’t keep tabs on his mentions in social media. Still, he’s savvy — not to mention cocky — enough to regularly mark his own postings with hashtags indicating #fashionking and #nostylistneeded.

“I don’t really pay attention to how people may view what I’m wearing,” he said. “My style kind of evolves just based on how I’m feeling, honestly.”

Instead, Westbrook is channeling his energy into prepping his secondary career as a fashion pro. While it’s commonplace for an athlete to front an ad campaign or try their hand collaborating on a capsule collection produced by a major brand, few have succeeded in making it on their own. Greg Norman transformed his nickname of the “Great White Shark” into a logo for golf shirts at his namesake company, and Bjorn Borg translated Seventies sex appeal to underwear for his eponymous brand. Plus, anticipation runs high for the first product to roll out from the joint venture deal that David Beckham signed late last year with Li & Fung spin-off Global Brands. When it comes down to it, though, the most visible examples of athletes-turned-aesthetes lie in golf shirts and underwear, not lifestyle brands.

Acknowledging that he has “a lot more years” left in the NBA, he still has much to learn from the designers he has befriended. “Me, personally, I just sit back and watch how they do things. A lot of time during shows, it’s very hectic for them. It’s kind of like me during a basketball game. I don’t want to be teaching and trying to tell people how I play the game. I know the space they’re in. My job is to sit back and observe and try to learn different things,” he said. “In the time being, I will try to find my way in fashion.”