From Savile Row to Harlem: Black Contributions to Men’s Style

Many aspects of men’s style and tailoring today have roots and influences in Black culture and youth movements, but the contributions from the community often go without mention.

Muhammad Ali and Veronica Porche, 1978 and Walt Frazier of the New York Knicks.

The influence of Black style and culture on men’s wear is immeasurable.

Many aspects of men’s style and tailoring today have roots and influences in Black culture and youth movements, but the contributions from the community often go without mention.

“There were many Black people in history in Savile Row, but once one person becomes famous you don’t hear about the rest,” said Art Comes First cofounder Sam Lambert, a former Savile Row tailor.

Lambert and Shaka Maidoh established Art Comes First in 2010 after meeting in West London and bonding over vintage clothing, music and subcultures. The fashion label, art house and consultancy also produces bespoke clothing, and is presenting its AW21 collection dedicated to tailoring and made-to-order styles. The pair entered Savile Row through British fashion designer Ozwald Boateng, the British-Ghanaian fashion designer who opened his first headquarters on Savile Row in 2002 and first flagship on the street in 2007, and learned more about the craft and the industry, attending Pitti Uomo and meeting factory owners. “We’ve been lucky to discover Savile Row,” said Lambert, who is currently based in Paris.

Boateng is one of the more popular men to work on Savile Row, owed in part to his four-year stint at Givenchy as men’s artistic director which ended in 2007, but Maidoh said to not overlook “neighborhood heroes” like the Allen Brothers, Michael Browne, Maurice Sedwell, Charlie Casely-Hayford and his late father Joe Casely-Hayford, all of whom have backgrounds and stories worthy of spotlighting.

The history of Black designers’ contributions to men’s wear and Black culture’s influence on style goes back further than what is discussed today. Many lean on recent history when examining the influence, citing hip-hop as a main driver for trends today or athletes influencing men’s style, but there were eras of influence that predate modern men’s fashion.

To properly examine Black culture’s influence on men’s wear, it requires a return to the early 20th century when tailored suits evolved into the zoot suit.

The style, which derives from the English drape suit credited to early 20th-century Dutch tailor Frederick Scholte, is closely tied to elements of American culture at the time, like jazz music and athletic dances like the lindy hop and the jitterbug.

“It’s hard to find the exact origin of the style,” said Kathy Peiss, a historian and professor at the University of Pennsylvania and author of “Zoot Suit: the Enigmatic Career of an Extreme Style.” Peiss thinks the style originated in Harlem “among young African American men,” that wanted a fuller, more draped look. “It’s one of the first examples of street fashion becoming popularized and spread through mass media, cartoons and movies, and it came out of young Black men that wanted to display themselves.”

As Clarissa Esguerra, associate curator of costumes and textiles at the Los Angeles County Museum of Art, noted, “Scholars of men’s wear look at the zoot suit as the first uniquely American suit style.”

“The suit was adopted by non-white groups, including African Americans, Japanese Americans, Filipinos and Chicanos — young underrepresented men and women — that loved jazz music,” she said. “In California, there were first-generation American youth who adopted this form of dressing to express themselves and to exert confidence. It was not a trickle-down thing, which there are so many examples of in fashion. This is an incredible instance where youth made a style that’s iconic for them and for a generation and has a story connected to it.”

The zoot suit would become an illegal style to produce during World War II due to restrictions on fabrics and rationing that the U.S. government instituted in 1942 — the suit required more fabric than a traditional suit to produce. The Zoot Suit Riots, a series of race-related riots in June 1943, would come as a response to the restrictions. Sailors in Downtown Los Angeles got in an altercation with young Mexican-Americans in zoot suits, and traveled en masse to East Los Angeles to attack the young zoot suiters they argued with. Black, Mexican, Filipino and Italian youths were largely attacked and blamed for the riots.

“There are so many parallels in moments where underrepresented people have been hushed too long and have to represent themselves and find community,” Esguerra said. “The zoot suit was for expression and then it became a symbol of anti-establishment. You see that again in the civil rights movement and you would see it in music, art, dress, all across the board.”

From there, American men’s suits continued to be looser than their counterparts in Europe, according to Esguerra, but overall, she said, suits became more fitted and narrow in the country after World War II.

The styles changed over the years influenced by Black jazz musicians and performers like Miles Davis, as well as gangsters like Jack Jackson, who Daniel Day, much better known as Dapper Dan, said were the “big influence” in Harlem. 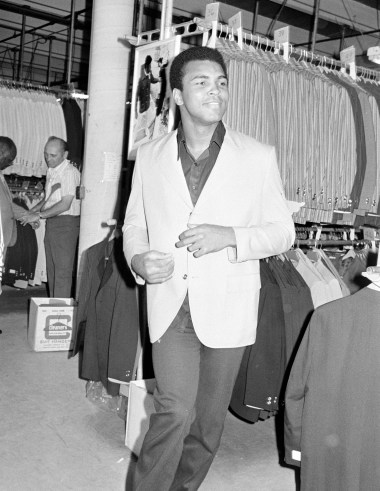 Boxer Muhammad Ali shops for a new suit before his fight with Joe Frazier on March 8, 1971, at Madison Square Garden. Ali was known to go on shopping sprees before his fights.  WWD,DNR

Day, who outfitted hip-hop pioneers like Eric B., Rakim and LL Cool J, said men would travel to the Lower East Side of Manhattan to buy their suits but, in his opinion, none of the suits could compare to what Harlem’s Orie Walls was making.

“I used to take younger guys to Orie,” Day said. Walls operated Orie’s Custom Tailoring, a haberdashery on 125th Street, outfitting men in the neighborhood and celebrities like Muhammad Ali, Jackie Robinson, Miles Davis and Joe Namath among others. Aside from Walls, Day said Leightons, Cy Martin’s and Phil Kronfeld were the most popular stores to shop in the era.

Another purveyor of style, Le Mans Haberdashers in New York City’s Upper West Side, was a Black-owned and -operated business that catered to a Black clientele. Founders Carl Davis and Kermith Morgan started the business in 1968 and produced a line house label suits and shirts, in addition to their tailoring services. Past reports from Black Enterprise stated that the duo achieved a 100 percent sales increase in 1974 despite the recession.

But their success wouldn’t be a match for the then incoming generation that wanted little to do with suits.

“The younger generation was taking over and totally rebellious against the suit,” Day said.

Day started his own haberdashery in 1982 making bespoke luxury fashion that was a departure from the tailored suit.

“I was making the fabrics and using the future technology,” he said. He was able to acquire machinery to produce fabrics from auctions as manufacturers were selling their equipment because production was moving abroad as Stateside manufacturing became too costly. Day would produce fabrics from Louis Vuitton, Gucci, Fendi, MCM and more to create one-of-a-kind pieces.

“With the knowledge and the machines, [I was] going to take advantage of doing things here. Take things straight to the consumer. When I did that and it became popular, I did luxury fashion made-to-order.”

Day produced clothing and works in his storefront on 125th Street in Harlem for a sizable and loyal clientele in New York City and from major U.S. cities like Philadelphia, Chicago, Miami and Houston. The first stars in hip-hop like Big Daddy Kane and athletes like Mike Tyson put Day’s prowess center stage. However, an altercation between Tyson and boxer Mitch Green outside of Day’s store would lead to its closing. The fight and resulting visibility of the store and its stock got Fendi’s attention, and the company sent its former corporate lawyer and present Supreme Court justice Sonia Sotomayor to raid Day’s business on alleged counterfeiting. Decades later, for its Cruise 2018 show, Gucci produced a style almost identical to one Day made for Olympic gold medalist Diane Dixon. Gucci made a brown fur jacket with brown leather sleeves with a G pattern, while Day’s version for Dixon was a brown fur coat with Louis Vuitton monogram sleeves. Social media accounts widely accused Gucci of copying Day’s work, which they denied, instead calling it homage. The occurrence would later lead Gucci to collaborate with Day on a collection, and would help him open an atelier in Harlem. Now he produces custom Gucci pieces at his atelier.

Guy and Shay Wood of 5001 Flavors and Harlem Haberdashery, also produced custom ensembles in the ’90s for a who’s who of hip-hop royalty and late greats like Tupac Shakur and Heavy D, as well as Snoop Dogg and Dr. Dre, Mary J. Blige, Fat Joe and D.J. Khaled, to name a few.

“I would just create for the moment,” said Guy Wood. He recollected a moment when Biggie Smalls rapped about wearing Versace on his song “Hypnotize.” Since B.I.G. rapped about it, he needed to own it. “Catering to bigger guys, they were able to afford us. Now they can get a silk shirt and blazer and hoodie. Big brands maybe thought it was blasphemy and now they’re chasing bigger guys years later. Versace wasn’t making stuff in those sizes. He was wearing 5001.” 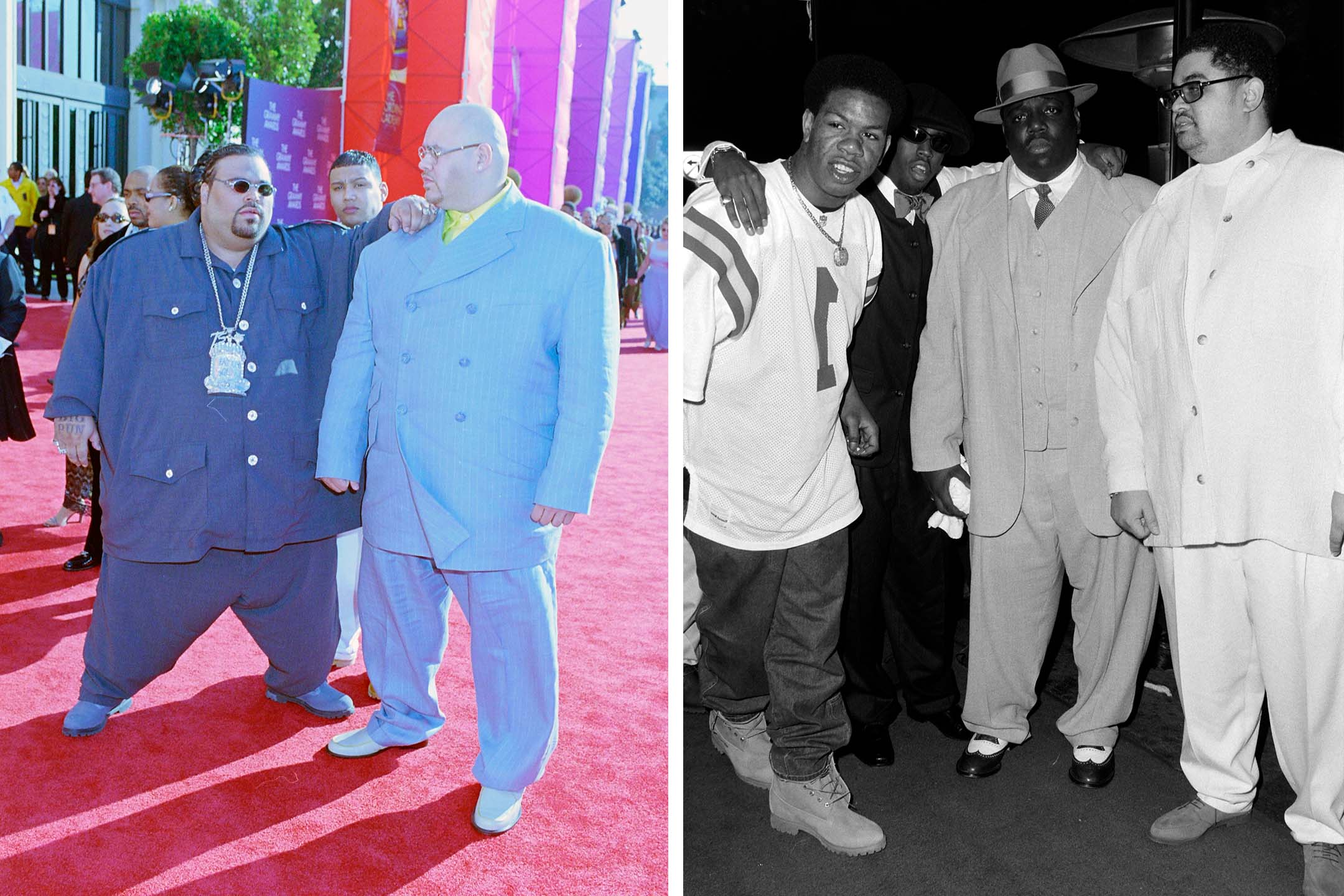 The duo opened Harlem Haberdashery in 2012 to offer the 5001 Flavors experience to the public. “5001 is a service-oriented business, and Harlem Haberdashery is where we wanted to move into mass and create retail opportunities,” Shay Wood said. “We realized working with the bigger public is where we needed to be.” Today, they offer smaller production runs and bespoke customization, as well as bespoke spirits and aroma therapy sprays, and will soon offer alkaline water.

Tailoring would see somewhat of a revival following the Great Recession, which also coincided with the change in dress code for NBA players, who were mandated to wear suits to games. LeBron James, Dwyane Wade, Chris Bosh and the other players dabbled in fine tailoring, and stylists like Rachel Johnson, Calyann Barnett and KeshaMcLeod made sure their superstar clients were properly outfitted in well-tailored suits and high fashion, contemporary styles. Today, men look to NBA athletes for style, so much so that even the NBA 2K video game series incorporates men’s wear designers in its games.

Black culture and tailored clothing have a connection that goes beyond fashion.

“There is a culture of craftsmanship that we brought from our lands,” Lambert said, noting however, that he feels bespoke culture is dying, and with it, the knowledge of Black culture and Black creators’ contribution to it.