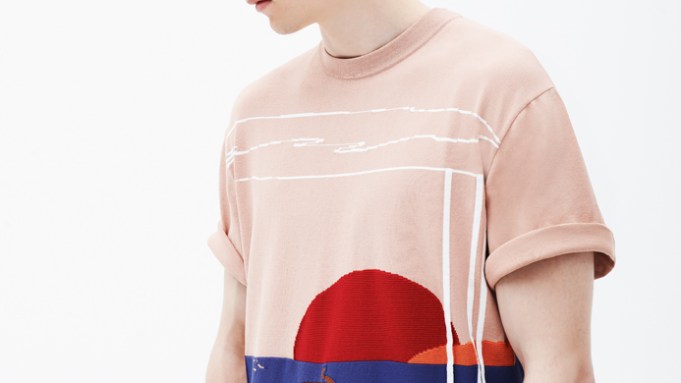 Solovière
Designer: Alexia Aubert
Design/inspiration: Founded in 2014, the brand’s motto is “less trend, more style,” said Aubert, who started her career with Christian Louboutin, before becoming studio director at Pierre Hardy and head of footwear at Oscar de La Renta. “I was bored with the seasons and with product that is disposable. What we wanted instead was the simplest style you can imagine with a little bit of pop,” she said.
Key styles: Easy calfskin leather slip-ons and extralight lace-up loafers done in suede have already been dubbed the “antisneaker.” “I say, they are for the Nineties’ skater who has grown up,” she mused. This season’s styles come in multicolor checks and soft earthy colors.
Prices: Made in Italy, the pairs range between 275 euros, or $309 at current exchange, and 395 euros, or $444.

Dita
Designers: Longtime friends Jeff Solorio and John Juniper
Key styles: The Mach One, a pair of slightly squared shades done in gold-plated titanium, which has convinced Lewis Hamilton among others. From next season onward, the label will run numbered limited editions of 300 to 1,000 pieces each. Dita is also the official licensee for Thom Browne Eyewear.
Design/inspiration: Each part, from the nose pad to the screw, is produced for Dita by a fleet of 100 artisans in Japan. A pair takes six to eight months to make. The only metal used is titanium, which is also hypoallergenic.
Prices: From $345 for Japanese acetate frames to $800. The Mach One goes for $660.

La Paz
Designers: André Bastos Teixeira and José Miguel de Abreu
Design/inspiration: Founded in 2011, the Porto, Portugal-based brand relies on the Atlantic coast for inspiration. With a strong focus on natural fibers, the ready-to-wear line centers on easy, versatile pieces, including ultrasoft terry cloth sweaters and airy crepe-cotton summer shirts. Only swimwear items resort to technical fabrics.
Key style: Colorful rice stitch knits and playfully printed shirts.
Prices: The line retails for between 40 euros, or $45, for a T-shirt and 220 euros, or $247, for a jacket at the Content Store in London and Wait in Paris, among others.

Uri Minkoff
Designer: Uri Minkoff
Design/inspiration: The sleek and modern accessories brand (formerly known as Ben Minkoff), marries style with function well. Created with young tech entrepreneurs in mind, its line of shoppers, briefs and backpacks is big on compartments. “Nothing should be in a guy’s pockets, because it’s not flattering to the body,” said the designer.
Key styles: Minkoff’s ultrasupple deerskin backpack is a bestseller, as are his inventive weekenders, featuring separate compartments for dirty laundry and shoes that are tucked away at the bottom of the bags, so that “all housed is safe and clean.”
Prices: Pieces retail for between $295 and $550, available through Nordstrom, Saks Fifth Avenue and Harvey Nichols. The brand’s first shoe collection is to hit stores in August. Think lightweight leather slippers as comfy as a pair of espadrilles.

D’Amico
Designer: Andrea D’Amico
Design/inspiration: D’Amico and his team prefer to call themselves a band rather than a brand. Others refer to them as “gentlemen riders.” D’Amico’s motorbike-inspired leather accessories add both color and hardware to a clean sartorial look.
Key styles: Although the brand started out with belts as its main category, today it’s the bracelets and edgy pocket chains done in a plethora of materials, including leather, horn, silver, beads and semiprecious stones, that drive the label’s sales.
Prices: Wholesale prices start at 30 euros, or $33. The brand boasts 300 points of sales, with 70 percent of business done abroad, mostly in Northern Europe, Japan and South Korea.

Jeckerson
Design: Italian pants specialist Jeckerson is expanding its product offering. The brand has signed a five-year licensing agreement with Como-based textile company Canepa to launch its first beachwear collection, which made its debut at Pitti Uomo. Canepa will handle the production and the distribution of the line, which is expected to be available in about 350 stores within two seasons.
Key styles: The first collection includes swim shorts, available in two lengths, printed with micro geometric prints in a vibrant color palette inspired by the Moorish architecture of Portugal’s Algarve region.
Price range: Swim shorts retail from 40 euros, or $45, to 120 euros, or $137.

Paikaji
Design/inspiration: Established in 1980, Paikaji is a Japanese brand that specializes in the production of Aloha shirts. The label, which exclusively uses fabrics produced in Japan, manufactures everything on the southern island of Okinawa.
Key styles: Along with traditional Hawaiian patterns, Paikaji shirts — some of them sold with coordinated short pants — also feature more graphic and unconventional motifs, always infused with a tropical, vibrant vibe. For spring 2016, the brand introduced buttonless polos, including an orange and purple style in a classic maxi hibiscus pattern, which is crafted from cotton used inside-out.
Price range: Wholesale prices range from 80 euros, or $91, to 100 euros, or $114.

Ulturale
Design: Traditional Neapolitan tie company Ulturale, a first-time exhibitor at Pitti Uomo, is relaunching under the guidance of a group of Milanese investors who teamed up to revamp the brand and inject it with a new twist. Focused on the production of a high-end, artisanal product offering, Ulturale’s collections feature a range of tie options, from more classic seven-fold styles to slim variations with a sleek design.
Key styles: For spring, Ulturale introduced denim ties, and channeled a maritime inspiration, printing anchors on a gray style. Paying homage to the brand’s Neapolitan origins, some ties come with a tiny good-luck horn-shaped charm hidden behind the folds.
Price range: Retail prices starts from 100 euros, or $114.

Omogene
Inspiration: One of the finalists of the last edition of Vogue’s Who Is On Next? talent contest, Monte Carlo-based Alexis Giannotti launched men’s wear label Omogene in 2013. Positioned in the luxury segment of the market, the label’s aesthetic is infused with a range of influences, including Nineties’ culture, music and skateboarding. Giannotti translates these into edgy collections blending the boundaries between formalwear and casualwear.
Key style: For spring, Giannotti was inspired by the solitary journeys of trackers across the United States. Sophisticated intarsia sweaters showed landscapes at sunset, while chic leather or suede shirts were finished with buttons referencing cars’ chrome-pleated details. The collection also included short pants in a high-end soft fabric with a Neoprene-like effect, lightweight silk and cotton denim pants, as well as coats crafted from leather or an iridescent fabric.
Prices: Shorts retail at 250 euros, or $285, suede shirts at 450 euros, or $513, and intarsia sweaters at 540 euros, or $616.

Archivio
Inspiration: Men’s wear veteran Romano Ridolfi launched Archivio three seasons ago. “My taste was always very much linked with the Forties and Fifties aesthetic,” said Ridolfi, who focuses on a sophisticated style infused with a sense of relaxed ease. Refusing to follow trends, as he admitted, Ridolfi combines more casual elements with a deconstructed sartorial look.
Key style: The spring 2016 collection includes chic suits defined by loose silhouettes and soft fabric with a slightly rustic feel, as well as a range of pieces featuring workwear references, such as a cool cotton jumpsuit.
Prices: Wholesale prices range from 69 euros, or $79, to 120 euros, or $137, for pants, while jackets go from 169 euros, or $192, to 200 euros, or $228.