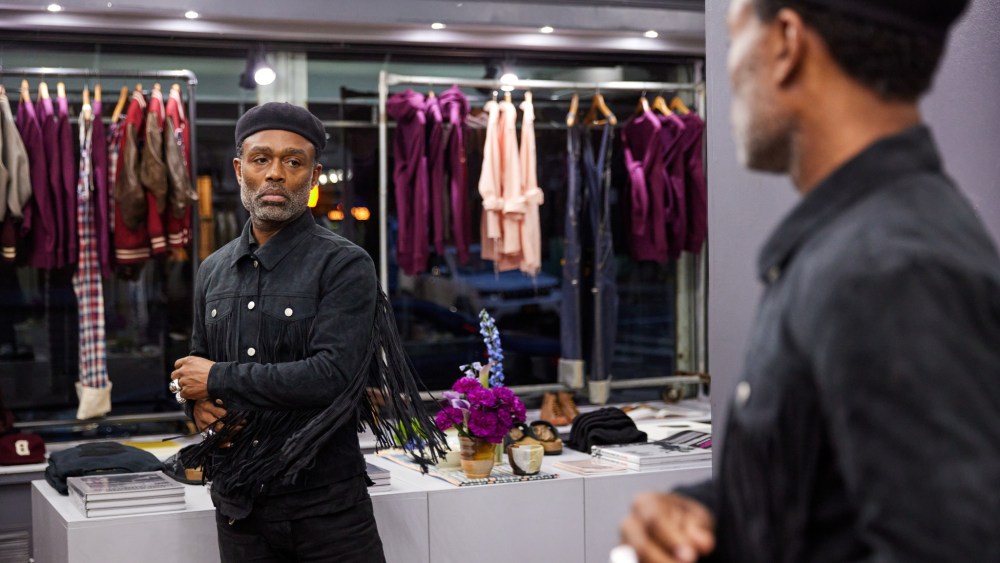 In the 16 years since establishing The Brooklyn Circus, founder and creative director Ouigi Theodore has stuck true to two tenets — building a community and celebrating culture.

“Brooklyn is a circus,” Theodore said of the inception of his brand, speaking from his 700-square-foot Boerum Hill storefront. “Even when I came here as a child, it was just such a big adventure. It looked like this explosion of thoughts, ideas and culture, but it all made sense. That’s what I think I like about the circus and that’s why living in Brooklyn with all of the languages and cultures felt like it represented who I was — a Haitian guy, an American, Black, hip-hop, reggae, travel.”

Theodore, who immigrated from Haiti as a child in the ‘80s, didn’t initially set out for a career in the fashion industry. The designer studied African studies at Stony Brook University, but then realized he wanted to pursue fashion and after graduation, went to Fashion Institute of Technology to study advertising design and become a graphic designer.

After working on design projects and attending trade shows, including Project in the early Aughts, Theodore embarked on his own venture to open a retail location in 2006 that would sell fashion and lifestyle items at the intersection of Bergen Street and Nevins Street in Brooklyn, which he initially planned to aptly call Bergen and Nevins. Along with the store opening, he decided to also release an apparel collection, which he called The Brooklyn Circus. Through a friend’s encouragement, he decided to take on the name The Brooklyn Circus for the store, too, and started creating a larger apparel brand.

“Who goes to the circus?” Theodore said about his brand’s customer. “Adults, kids, Black, white, weird, strange, other, you know what I mean? Sometimes we’ll say it’s the guy and gal that have everything, but want everything else. It’s an aspirational individual. It’s a young guy that was 14 when we launched The Brooklyn Circus and now years later he’s employed and making money and can afford a $500 to $700 jacket. It’s a personality type.”

Theodore explained the brand’s consistent bestseller is its varsity jacket, which he has been producing since The Brooklyn Circus launched. The brand debuts varsity jackets on a frequent basis, offering styles in different colors and featuring various design elements.

“When we launched our first varsity jacket in 2006, it was with the intention of becoming one of the best players in the game in that space,” Theodore said. “It was just a platform for us to tell as much story as possible. I played high school varsity football and went to college — it’s just that thing. I’ve seen folks attempt to look tough and look like a thug in a varsity jacket, but you’re wearing something that’s rooted in collegiate culture. So, it’s athletic, it’s prep, it’s Black ivy — it was just aspiration. There was so much you could say and do with a varsity jacket that we decided to own it in 2006 when none of the fashion houses were doing a varsity jacket.”

The Brooklyn Circus varsity jackets are also part of the brand’s buy-back program. The company encourages customers to bring their worn varsity jackets back to the store if they no longer want them and they will buy them back. The brand then refreshes the jackets and offers them for sale again.

“It is a sustainability thing and it’s also selfishly us wanting to see our product and how beautiful it looks as it ages because we’re rooted in vintage,” he explained. “At times, it’s rare to be able to have 10 varsity jackets that we bought back, but we have them lined up and we’re seeing the scuffs and scars.”

For Theodore, operating out of his storefront has always been an important part of the business as it helps the brand stay close to its Brooklyn roots and community. At the Brooklyn store the brand offers a curation of products across apparel, footwear, accessories and lifestyle offerings.

The company previously had a San Francisco store for 10 years and has also opened shop-in-shop locations in global retailers such as Le Bon Marché in Paris; Harrods in London; Ships in Japan, and others.

“I decided to just keep [the store] small and keep it tight and build a culture around it with as much community as possible and really root ourselves in what we were and who we were versus appearing big in this idea of success in America that the bigger the better,” Theodore said about his retail strategy. “I’m going to stick to Brooklyn and go deeper. Let them come to us. Make [the store] so good that they come to us versus bigger and better and more expense and not enough depth of culture.”

Collaborations have also become an important part of the brand. In recent years The Brooklyn Circus has created collections with the likes of Todd Snyder and Jack Daniels. Theodore was also tapped by Macy’s to relaunch its men’s private label brand Sun + Stone. Theodore created three collections for Macy’s under that brand.

This month The Brooklyn Circus released its latest collaboration: a collection created with Lee. Theodore wanted to pay homage to Black cowboys and the American West for the collection, which consists of varsity jackets, corduroy sets, denim pieces and other styles.

Going into the new year Theodore has his sights set on multiple channels. He plans to restart The Brooklyn Circus’ wholesale business and enter the hospitality industry. He also wants to continue the brand’s emphasis on retail by opening more storefronts in Manhattan; Atlanta; London; Paris, or Japan.

“We want every store to feel different and to also bring a different element because it’s similar to a circus,” he said. “You think of the side show and the main show, you think of Cirque du Soleil. It’s just different shows. When you go to Vegas you see different performances so we wanted it to be like that, but what runs through it will be the hundred year plan and the global village — that whole idea and not just selling clothes.”