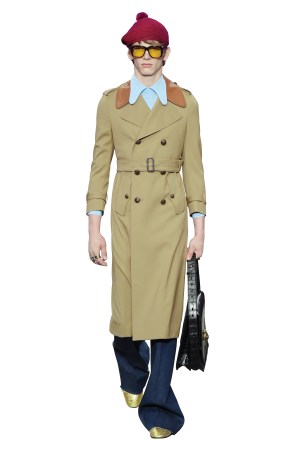 1. Gucci
One of the most influential collections of the season, Alessandro Michele presented a genderless Seventies-infused lineup headlined by silk blouses, lace shirts and a fey attitude.

2. Sacai
Japanese designer Chitose Abe traveled across time, styles and cultures to conjure a truly global guy with a mash-up of styles from Peruvian-inspired Bermudas to plaid ponchos.

3. J.W. Anderson
Storytelling via clothes and accessories is a point of differentiation for the London-based designer, who exceled one more time with his “boy in space” androgynous effort.

4. Giorgio Armani
In a season awash with fluidity, oversize proportions and plays on volume — nobody does it better than Milan’s emperor of soft, who showed a lineup full of vintage slouchy silhouettes.

5. Paul Smith
An iridescent color scheme gave a colorful glow to the designer’s lineup where a new tailored clothing silhouette — double-breasted jackets in a variety of shapes — reigned supreme.

7. Lemaire
Pleated pants that pooled around the ankles paired with lightweight flowy jackets and coats were at the core of this new Parisian elegance.

8. Louis Vuitton
Kim Jones’ appetite for travel was evident in the exotic prints and embroideries from Southeast Asia that he used in Ivy League silhouettes, such as a souvenir jacket, this season’s key style.

9. Ermenegildo Zegna
Generous silhouettes, liquid fabrics and stripped-down tailoring were among the most directional looks by designer Stefano Pilati during a subtly futuristic show.

10. Officine Générale
Photographs of Marcello Mastroianni strolling in the streets of Saint Germain served as a key reference for Pierre Maheo’s directional collection.