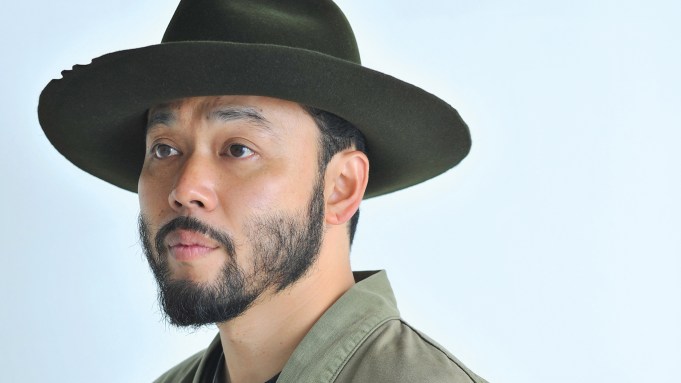 Motofumi Kogi, better known as Poggy, is the director of United Arrows & Sons, the men’s floor of the famed Harajuku store United Arrows. He is also one of the most recognizable Japanese fashion figures, frequently photographed for street-style blogs such as The Sartorialist, and Jak and Jil. But unlike the many style “discoveries” — who seem to come and go in the blink of an eye — Poggy’s influence endures.

After graduating from fashion school in his hometown, the city of Sapporo on Japan’s northern island, Poggy struggled to find a job nearby. He had a friend who worked part time at a United Arrows store in Tokyo, so in 1997 when he heard the company was hiring, he traveled to Japan’s capital for an interview.

Joining United Arrows brought about a style evolution for him. He had previously bought brands such as A Bathing Ape, Good Enough and Neighborhood, but now he started blending them with suits.

After about four years, he moved to the company’s public relations department. As he came into contact with editors and stylists, Poggy began to see a shift in hip-hop style as people such as Kanye West, Pharrell Williams and Outkast began mixing traditional clothes into their wardrobes. Convinced the trend would hit Japan, Poggy wrote a proposal for a store, which the company accepted. He was appointed the director of the new men’s boutique, Liquor, Woman & Tears, which carried brands as disparate as Supreme, Brunello Cucinelli, Etro and Jacob & Co. Despite collaborations with top brands and some very high-profile customers including West and Nas, the store was forced to close after the economic crisis of 2009. Poggy thinks that, for the time, it may have been a bit “too niche.”

Undeterred, he worked on writing another proposal, United Arrows & Sons, which opened in the basement of the Harajuku store in 2010. Among his favorite labels today are Art Comes First, Porter, Nonnative, Sulvam, Kith and Pigalle.

Poggy’s many buying trips abroad caused a further evolution in his personal style. He saw that when he visited showrooms or exhibitions, most people had never heard of United Arrows, and he found he was quickly forgotten. “At that time, in order for people in the hip-hop world to remember me, when I went to clubs I would purposely wear things like bow ties,” he said.

Today, Poggy is known for his affinity for hats, which he wears every day. He buys many of his hats from 5525 Gallery and Readymade, both Japanese brands.

“I’ve always liked hats, but until about three years ago, I was wearing a lot of suits. In 2010, United Arrows started a brand called Mr. Bathing Ape with Nigo. We made suits that looked simple at first glance, but then maybe they would have a Bathing Ape print on the lining or something,” he said. “And from then, little by little, I wanted to show my casual side as well.” So he began incorporating hats into his daily routine.

In addition to his now signature look of mixing street influences with classic tailoring, he wears a lot of the pieces he designs for the United Arrows & Sons private label, which launched this year. Completely made in Japan, it incorporates traditional styles and production methods and mixes them with modern influences.

Poggy visits the U.S. about three times a year on buying trips, and Los Angeles has become one of his favorite places to visit. “In L.A. recently, there’s this mix of street and luxury, a kind of post-luxury, and there are a lot of interesting brands,” he said.

If he gets time to shop while abroad, Poggy says he enjoys visiting vintage stores. But aside from business, these days his trips are mainly filled by meeting people and getting together with friends and acquaintances.

“I used to go out every night and stay out until the morning. I would go to clubs and then take the ferry to Staten Island,” he said. “Now I’m much older, so I don’t go out as much.” Back home in Tokyo, his free time is used to help coach his eight-year-old son’s soccer team, despite knowing very little about the sport.

Poggy’s next goal is to open a United Arrows & Sons store or shop-in-shop in either New York or L.A. He said he has had some interesting offers, but so far nothing has been decided. His overall goal for the brand, though, is a much broader one.

“I want people around the world who are into street fashion to wear jackets,” he said.