“It’s literally a walk through memory lane. It’s allowing me to give my fans a memory that’s important to me and how I felt during those childhood years,” the rapper said.

There is nothing quite like riding your bike through Harlem in the summertime — just ask A$AP Ferg: The A$AP Mob member partnered with bike brand Redline to launch a special RL 275 bicycle in yellow and an accompanying capsule collection.

The Redline x Ferg collection, which launches on e-commerce and content platform NTWRK on June 11 and at Stadium Goods in New York City on June 14, consists of the special-edition alloy frame bike that Ferg debuted at Pharrell Williams’ “Something in the Water” festival in April, as well as a yellow hoodie with Redline and Ferg branding and long- and short-sleeve T-shirts featuring similar branding and the line “Ride With the Mob” from the rapper’s song “Plain Jane.”

“It’s literally a walk through memory lane,” Ferg told WWD. “It’s allowing me to give my fans a memory that’s important to me and how I felt during those childhood years.”

Ferg has an affinity for bikes and had a few Redline styles growing up. He even had dreams of designing his own. “I’ve always expressed to Pharrell how much I love bikes and how I wanted to create my own bike for the last five to seven [years],” he explained. “He introduced me to some people at Redline, and now fast-forward, I have my collaboration with Redline.”

The collaboration was initially not going to include apparel, but the idea came to the rapper after spotting a Redline advertisement. 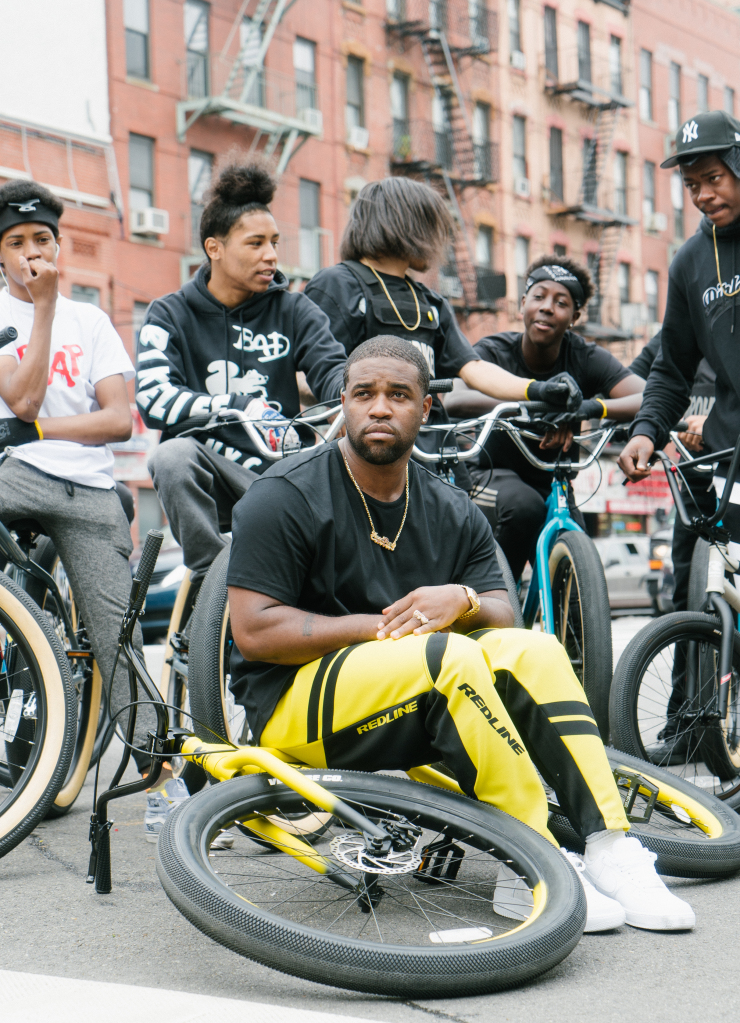 “I saw a Redline ad that had a yellow suit and asked if this is being produced, and they said no. My initial reaction was: ‘Let’s do it, let’s make it,'” said Ferg. “I felt the need to create something that allowed everyone, especially the youth, to feel like they’re a part of me and the brand.”

Fashion is very important to Ferg. The rapper in 2014 launched a collection with Astrid Andersen for Topman and collaborated again with the Danish designer on fashion film “Water,” and created Traplord x Uniform with socially conscious brand Uniform. Even as a teen, he dabbled in fashion design launching Devoni Clothing, which he reminisces about in an interlude titled “Phone Call With Breezy” on his album “Always Strive and Prosper.”

“To me fashion is a feeling, I get dressed every day based on how I feel,” he said. “Fashion to me is more than just looking good. It’s the feeling of ‘feeling good’ based off what you’re wearing. I feel like fashion is the one way everybody can show off their emotions and thoughts without speaking. You get to express yourself and represent something.”

Ferg most recently appeared at the CFDA Awards wearing Pyer Moss, the contemporary label founded and designed by his longtime friend Kerby Jean-Raymond. But expect the rapper to change clothes and go back to his old neighborhood to bring in the summer season the way Harlemites know how to: riding through the streets on a bike.