Andre van Noord is passing the baton to his son Parker who joined him on the runway this season. 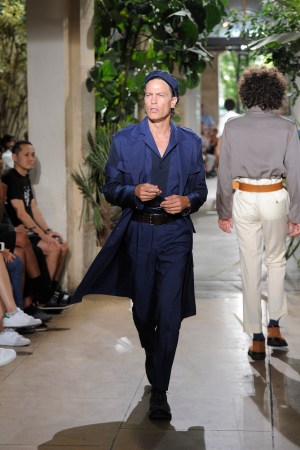 Grant McNamara Has Created a Business Being a Concierge for Grooms

A famous saying about apples and where they fall vis-à-vis the tree seems to apply this season, especially in the case of Andre and Parker van Noord. The Dutch father-son duo walked the Umit Benan show, together for the first time, in Paris.

Andre started his career at age 21 and worked with some of the industry’s most famous photographers, including Hedi Slimane and Peter Lindbergh, so he’s got more than enough tips for Parker as he gets his start in the business.

What do you think about your son following in your footsteps?
Andre van Noord: The industry is hard on people. Only time will tell if he makes it. The only thing that a father can wish for is that his son will do better than himself. Otherwise, there is no use in doing the same thing.

How did you decide to work together?
A.V.N.: My son has a natural feel for the camera. People noticed that and asked if they could photograph us together. I took him on jobs and now, occasionally we work together. It just happened seamlessly.

What are your thoughts on your dad being a well-known model?
P.V.N.: Well, before I started my first season in the fashion industry I did not really know he was such a famous man. But when I went to several castings like Berluti, Louis Vuitton and even Gucci, they told me my father was/is a legend. People were nice to me. There is only one thing I don’t really like about my dad being a [top] model, everywhere I go I am mentioned as the son of Andre van Noord….I want to make my own name in the fashion world. Oh, and if you knew my father, you would not see him as a fashion model, and that is what’s very cool about him.

Will we be seeing you together again on the runway next season?
A.V.N.: Probably…we’ll keep you posted.
P.V.N.: Yes!