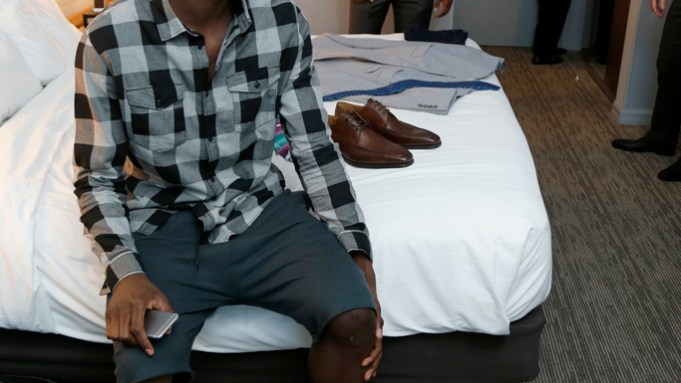 It was truly a family affair Tuesday afternoon as Michael Kidd-Gilchrist got ready to step on stage at the New York Hilton Hotel for the NBA draft lottery.

Kidd-Gilchrist’s mother, Cindy Richardson, was in his hotel room helping him get dressed in the custom gray suit designed and created by his uncle, Michael Edwards of Elegance Custom Clothiers LLC.

The 21-year-old forward for the Charlotte Hornets was one of the only players on hand to represent his team at the lottery.

At 6 feet, 7 inches and 230 pounds, Kidd-Gilchrist has a hard time shopping for clothes off the rack, so having an uncle in the bespoke business has turned out to be a blessing.

“He makes all my dress clothes,” he said, slipping on a slim-fit lavender shirt with a stark white collar and cuffs — with his initials on it of course. “It’s not a favor. He always makes me what I like and doesn’t say, ‘You need to wear this.'”

For this ensemble, which included a tie, pocket square and socks in complementary Hornets colors of teal and purple, Kidd-Gilchrist said he and Edwards spent about an hour picking out fabrics and colors for the suit and shirt.

He credited his assistant Aaron Burt as instrumental in choosing the accessories, which included a gold Rolex watch.

Kidd-Gilchrist said Tuesday night’s outfit “doesn’t have too much going on, but there’s something there if you look at it. It’s not just a plain suit and it fits me nice. I have my own sense of style and it’s different from everybody else. It’s not over the top, but when I walk in a room, I want people to say, ‘He looks nice.'”

His favorite designers are Fendi and Ralph Lauren and he’s partial to Margiela or Balenciaga shoes and Stance socks for his size-13 feet, he said.

Three years ago, Edwards also dressed him for the draft, when he was selected second overall.

His mother said that night was “nerve-racking” as they waited to see where he would wind up, but Kidd-Gilchrist said he was “anxious and excited, but not nervous.”

These days, Kidd-Gilchrist, who left his native New Jersey to live full time in Charlotte, says his style has changed.

“When I was in middle school, it was shorts and T-shirts. Then in high school, it was jeans. Now I’m getting older so I think a suit and tie is more relaxing.”

And does it also say that he’s made it?

Kidd-Gilchrist hesitated for a moment before smiling widely and said: “I guess.”