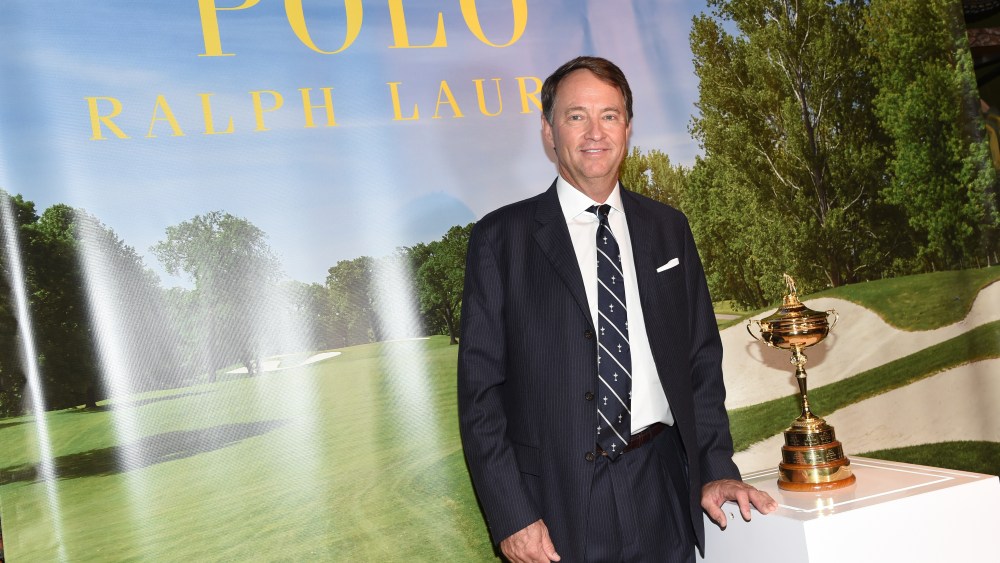 NEW YORK – Davis Love 3rd was swarmed when he made an appearance at the Polo flagship on Fifth Avenue here Monday night to help the brand unveil the official Ryder Cup uniforms for the American team. Customers wielded iPhones and listened intently as the team captain — and Ralph Lauren-sponsored athlete for 22 years — fielded questions from Golf Digest for a Facebook Live feed. “Who’s your greatest inspiration?” “My dad.” “Who would be your dream foursome?” “Their last name would all be Love. My mom, my dad and my son.”

WWD also managed to grab a few minutes with the man who will lead the U.S.’ 12 best players against Europe at Hazeltine National Golf Club on Sept. 27.

WWD: The U.S. hasn’t won a Ryder Cup since 2008. What do you think our chances are this year?
Davis Love 3rd: I think they’re great. We have a great team. We always go in as the favorites. We don’t seem to always come out as the favorites, but I think we have a great chance. They’re playing very well. We’ve got to round it out with four captain’s picks still, but on paper we’re very strong so I’m confident.

WWD: When will you make the final picks?
D.L.: We have two more weeks of the playoffs and we pick three after the BMW Championships. Then we have two more weeks, and after the tour championship, we pick our last player — actually the Sunday night before we go to the Ryder Cup. So it’s a little bit different process this year. We’re waiting until the last minute to take the hottest player. So we have a lot of flexibility.

WWD: Rickie Fowler is really vying for a spot on the team. Do you think you’ll pick him?
D.L.: Rickie doesn’t have to worry too much. He’s got three weeks to play and he’s way up there in the rankings. But really, anybody over these last three tournaments can play their way on — or off — the team. We have eight, but there’s a long way to go for the other four.

WWD: What about you personally? Were you excited to be chosen as captain?
D.L.: This time around, there was a Ryder Cup task force and a Ryder Cup commission was set to change the system. We all sat down as a group: a lot of former players, former captains and future captains to decide what we’re going to do. We keep losing. The PGA of America gave us an opportunity to weigh in and that’s why I’m humbled and honored to be the captain this time because it was really chosen by that group of my peers. So it’s been a great process. It’s more of a group effort, setting the stage not only for ’16, but for years in the future. We feel as captains that this is a fresh start for our team. We’re not going to look at the past anymore, we’re headed for the future.

WWD: Are you still playing?
D.L.: I was playing steady until around eight weeks ago; I had a hip resurfacing so I’m taking a nice break for the Ryder Cup. And as soon as that’s over, I’ll be back. The new season starts in October.

WWD: What do you think about this year’s uniforms?
D.L.: The uniforms are awesome. The look is always great but the performance of them gets better and better. This is their [Ralph Lauren’s] third or fourth Ryder Cup  and what’s great is that the players tell me how much they like the stuff they had in ’14. We have that same stuff again, so that tells you it’s working and they’re comfortable in it. And they obviously look good; Ralph’s going to make sure of that. But as long as they stay warm and dry, they feel like they can perform in it. That’s the hardest thing that people don’t realize: Every other week in the year they get to wear exactly what they want, and all of a sudden they’re on a team with different clothes and different hats and different bags. So making sure they’re comfortable with that is a big part of it.

WWD: What do you like to wear when you’re not in golf clothes?
D.L.: I’m usually in the more classic polo and shorts. They also have a lot of RLX  — one of my favorite pieces is a camo cashmere sweater. I’m more outdoors than business suit.