Eric Emanuel is stepping out on his own. Following collaborations with Adidas and New Era, the streetwear designer has opened the first pop-up shop under his own name at 251 Elizabeth Street in New York.

In November 2018, Emanuel worked with New Era on a pop-up for the brand’s MLB apparel, followed by another with Adidas for the rerelease of the Adidas Rivalry in January.

But this shop, which will be open for three weeks beginning today, will be his first solo foray. It carries Emanuel’s signature basketball shorts in solid colors and Andy Warhol cow wallpaper-inspired patterns and colors and trucker caps. New product will be released every Friday, beginning with the Adidas Rivalry low-top, the 1986 sneaker initially made in France for NBA Hall of Famer Patrick Ewing, and later mesh floral and plaid shooting shirts and matching shorts. Emanuel wants the pop-up to feel like a home, hence the pink couch, wooden floors and yellow striped walls adorned with artwork. 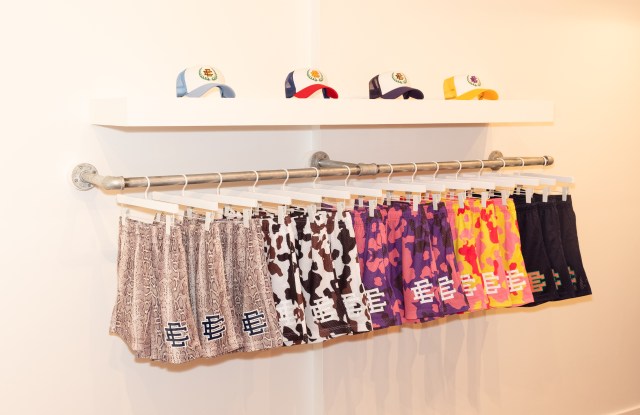 The Syracuse, N.Y.-native achieved instant success by producing snakeskin basketball jerseys that were worn by rappers Travis Scott, Post Malone, A$AP Rocky and Future, among others. Emanuel has since shifted his focus to basketball shorts.

“When I started making the product, I had no idea how the wholesale process worked,” Emanuel said. “It was a blessing in disguise, because it forced me to create this direct-to-consumer relationship.”

The FIT graduate does wholesale at retailers including Patron of the New in New York, LeBron James’ boutique chain Unknwn, and Fred Segal, all of which sold out his product within a day, he said. “I’ll wholesale to stores I have close relationships with and I trust,” he said. “It’s my name so if I’m going to put it in your store I have to know you.”

Emanuel gets most of his inspiration from sports, especially basketball, which he played in high school, as well as baseball for its logos. Though Emanuel grew to love style through sneakers — “I would work on weekends just to buy Air Force Ones” — basketball had a bigger impact on him, though he would say he “was terrible at basketball.” He grew fixated on the early Aughts basketball athlete style and admired Allen Iverson’s off-court swagger and rapper Fabolous’ collection of throwbacks (he considers the rapper to be his “most important muse”).

“When I was a child,” he explained, “Iverson was an icon to me, and again it wasn’t necessarily about him on the court. He was great on the court, but off the court, it was the way he carried himself, the way he dressed. He paved the way for all the street fashion that you saw in rap videos or on the street. He was it and people don’t give him enough credit.”

He also cites the influence of NBA athlete Carmelo Anthony, who won the NCAA Championship in 2003 at Syracuse University. Emanuel felt pride in Syracuse after seeing rappers wear Anthony’s college jersey after the championship victory.

New Era tapped Emanuel to partner on hats in 2017, as well as its first licensed apparel collection in North America in 2018, and Adidas reached out to partner on the Crazy BYW sneaker in 2018 and a floral capsule collection for spring 2019. Unknwn also collaborated with Emanuel on tie-dye shorts.

Reebok is the latest to partner with Emanuel and will launch at ComplexCon the The Iverson Answer V EE, the first retro of the Allen Iverson sneaker with the designer’s double-E logo. “I was the first person to change his logo ever, which is an incredible thing to me,” he said.

Emanuel will be very busy in July, but he is already focused on the future. “Right now I want to position myself in the basketball market,” he said. “Between Adidas and Reebok, they have the assets, with Reebok’s retro basketball silhouettes and Adidas’ performance silhouettes, I’m able to bounce between the two. The brands all have strategies when they go to partners, but the one thing I can say is they allow me to be as free as I want to be.”