For the past 78 years, the Father’s Day luncheon has been an annual tradition for the men’s wear industry.

But perhaps the biggest star of the event was a lesser-known name: Brent Johnson.

The Detroit dad was the winner of the 2019 Ashok Sani All-Star Dad award sponsored by Esquire magazine. He was selected his nine-year-old son Jack wrote an essay. Jack, though, couldn’t actually write the essay himself, he had to ask his grandmother to help because his litany of medical issues — cerebral palsy, blindness and a seizure disorder — have left him unable to see, speak or walk. But his essay left the room sobbing as it talked about how lucky he was that his father bathes him, feeds him and loves him, and his parents were able to afford to buy the wheelchair-accessible van he needs to get around.

Knowing other families aren’t as fortunate, Jack wrote that his father created a charity called Giving Songs to help families with multi-disabled children buy handicapped accessible cars and the other necessities they need to help care for their offspring.

“I can’t make my dad cards or put my arms around him,” his mother said, reading from the essay, “but I can nominate him for this award.”

If that wasn’t enough to bring the guests to tears, Johnson’s eloquent acceptance speech where he not only thanked his wife, mother and in-laws, but also spoke about how when his son was born, he had dreamed of how they’d one day ride motorcycles and play catch. Realizing that would never happen, he instead embraced his son’s love of music, learned to play guitar and founded the charity. “You’ve given me my purpose,” he said.

Following Johnson on the podium was no easy task, but Gonzalez rose to the occasion by telling stories about his four children, two with his wife, October, one from a previous relationship and one adopted daughter. He said his 18-year-old son is a bit of an “airhead” like he was at the age, while his 11-year-old daughter is a free spirit, his nine-year-old is “intense, focused and literal.” His four-year-old, who was a “meth baby” adopted from his wife’s half-sister, was a bit challenging in the beginning, but has become “the sweetest girl.” 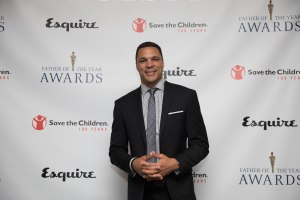 Father of the Year Tony Gonzalez.

He said his eldest son is a middle linebacker in his senior year of high school, his 11-year-old is a great tennis player and the nine-year-old is drawn to basketball. The youngest is “probably not going to be an athlete, but she’s so intelligent, she already speaks two languages,” he said before the event.

Gonzalez admitted that being a father is “daunting in the beginning,” and new parents always question themselves but his children have brought a true curiosity into his life by seeing things through their eyes, he said.

“I’ve learned more from my children than I ever did on a football field,” he said.

Other honorees included McCain, whose daughter, Meghan, recorded an acceptance video for the posthumous honor, and Kingsbury, who refused to speak to reporters at the low-key press conference that always precedes the event and is intended to promote the Father’s Day holiday and raise awareness for the event’s charity partner, Save the Children.

Although other high-powered Dads including Vice President Joe Biden, General Colin Powell, Govs. Mario Cuomo and Chris Christie, NFL star and talk-show host Michael Strahan, Sen. Ted Kennedy and Rep. Chuck Schumer have all gladly participated in the past, Kingsbury’s team said he would be taking no questions. So it was even more ironic when he was presented his award by his journalist daughter.