A Geox car for the 2019 Formula-E Championship in New York.

As many New Yorkers and tourists took in the city’s sights or fled to the beach over the weekend, thousands of others rushed to Red Hook in Brooklyn for the final leg of the 2018-19 FIA Formula E season. This weekend saw the end of the fifth season of the electric motor-racing championship.

Founded by former politician and businessman Alejandro Agag, Formula E is a fast-paced electric version of the popular Formula One competition. While the latter uses hybrid engines, an innovation it implemented in 2019, Formula E uses strictly electric cars produced by Spark Racing. The lithe 2,000-pound cars reach speeds as high as 160 miles an hour and can reach 60 mph in two seconds.

The 2018-19 FIA Formula E season saw races in Morocco, Chile, Hong Kong, Saudi Arabia and Switzerland. The season began on Dec. 15 in Ad Diriyah, Saudi Arabia, which also marked the first Formula E race to be held in the Middle East. Following a world tour that took racers to Marrakech, Santiago, Rome, Paris, Monaco and Berlin, the competitors headed to New York City to compete and claim the championship.

Prior to the weekend event, Hugo Boss and Porsche unveiled a collaboration collection, launching this fall in support of Formula E. The German fashion company is an official apparel partner of Formula E along with other official partners Tag Heuer, BMW and Allianz, among others.

The last two races of the season were held on the Brooklyn Street Circuit. Teams such as Panasonic Jaguar Racing, Mahindra Racing, Geox Dragon and 2018 champions Techeetah Formula E tested their cars in the early morning, and transferred data from their test to FIA for approval. Following the test drive, the drivers competed in heats, vying for better positioning. Geox Dragon’s principal and owner is Jay Penske, chairman and chief executive officer of Penske Media Corp., parent of WWD.

The heats allowed for the drivers, including Geox Dragon racer José Maria Lopez, to test new car technology and uniforms. Lopez’s career spans 30 years and eight championships in touring car racing and formula racing over two decades. He said the Formula E races are different but as intense as other categories, and he was drawn to the electric car racing circuit because of the level of competition, but also to promote electric cars. 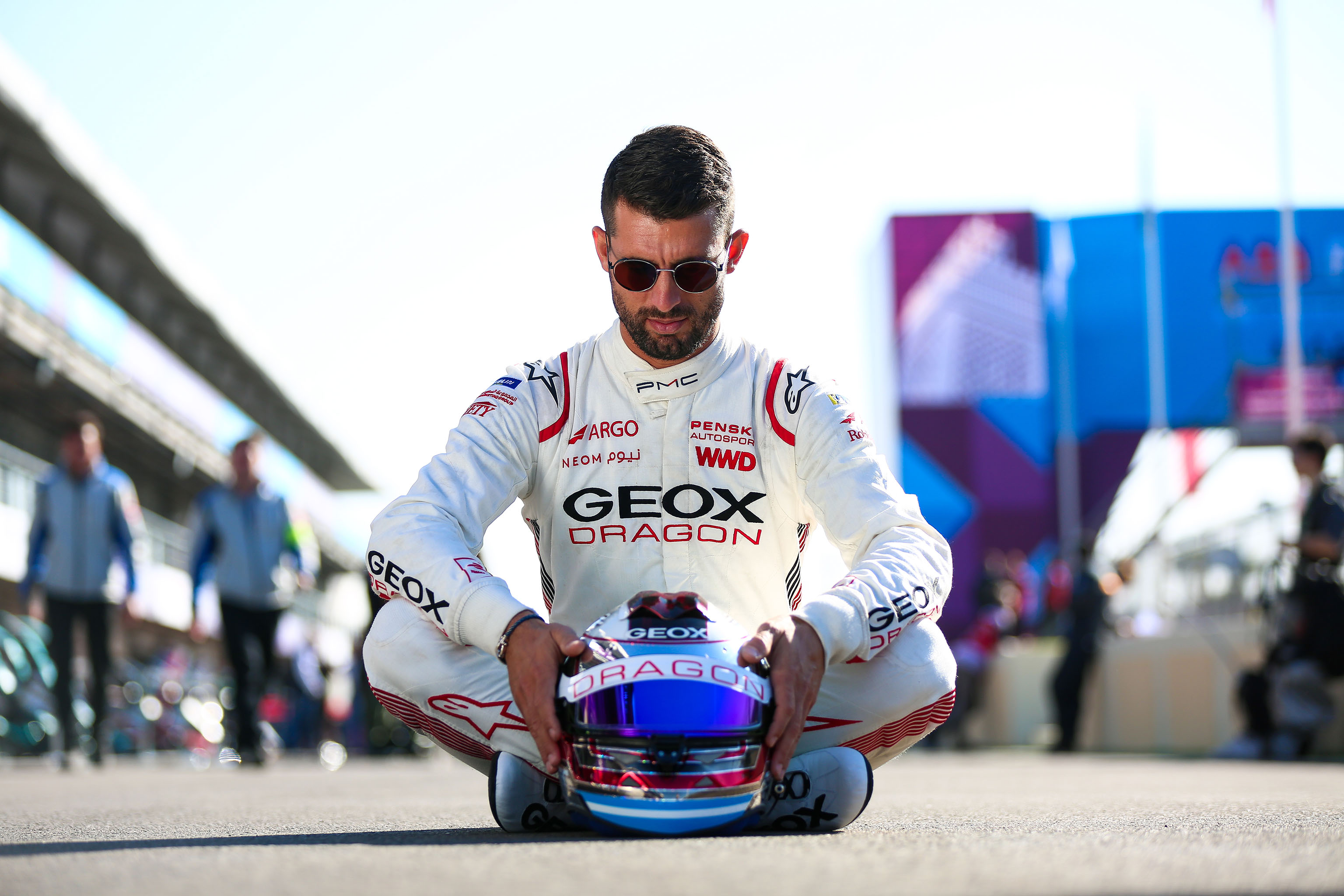 “We’re also sending a message showing the people that the future is now. It’s important to be part of it,” he said.

Lopez and his racing partner Maximilian Günther, the former Dragon test driver and youngest driver in the competition at 21 years old, competed in Geox shoes crafted with breathable soles to lessen the body heat in the cockpit.

“We have some equipment from them. We’re using the racing shoes that they prepared for us,” Lopez said of Geox. “They can breathe and they’re very, very light shoes. Weight is very important in motor racing and motor sports. You feel a lot through the pedals, you really need to feel the car and be connected to the pedals.”

Geox founder and chairman Mario Moretti Polegato was also in attendance at the race to support the Dragon team. Polegato saw Formula E as an opportunity to test Geox technology in intense conditions.

“We have a special lab and they study the human movement of the feet and body. Formula E represents a great opportunity to test our new technology outside of the lab in extreme sport,” Polegato said. The racing boot designed for the Geox Dragon team is a modification of the company’s breathable rubber sole technology.

The chairman is also focused on sustainability and feels Formula E aligns with his vision of the future. “The second motivation for Geox is to give a contribution in terms of sustainability,” he said. “I flew from Italy just to participate because I consider New York City to be one of the best places to promote our innovation. I imagine in the future every bus and car uses electric engines. Maybe New York or Milan will become a forest. It’s radical.”

Polegato is interested in other sports, but he leaves that job to Diadora, the Italian athletic footwear company Geox acquired in 2009. The label uses Geox technology in its running shoes.

The weekend event was a sold out, family-friendly affair. Some attendees sat in the grandstands to watch drivers compete for best times, but most explored the sprawling outdoor venue where electric cars by Porsche, BMW and Jaguar and their racecar counterparts were on display. Attendees also took part in a driving simulator, where they could experience what it’s like to drive a Formula E car. People returning for this season’s race and newbies unfamiliar with the competition received a crash course in Formula E at a tent displaying the winners of the previous seasons and the technology that goes into the cars. 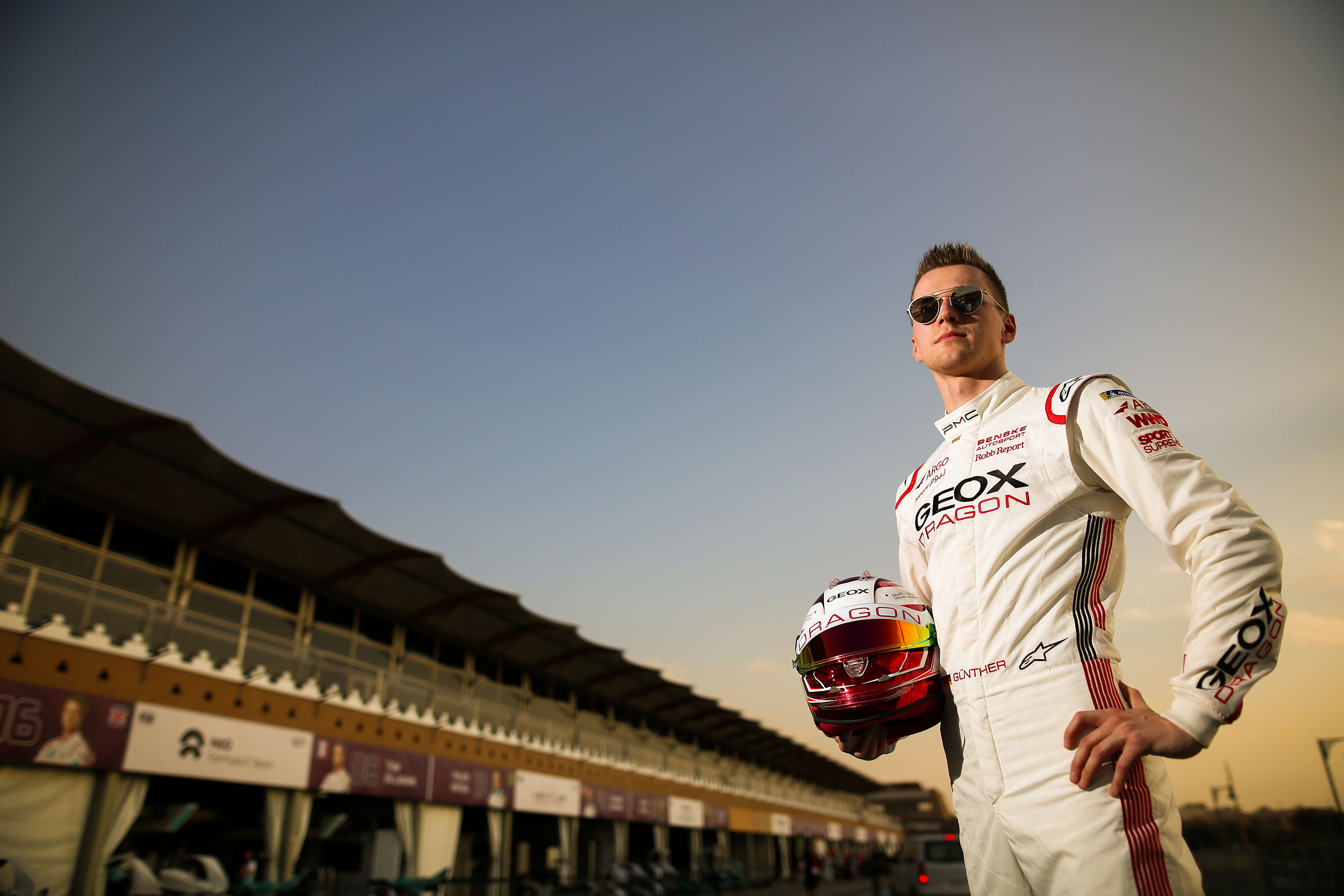 Many also flocked to the E-village, where a massive screen aired the heats and interviews, and where the gift shop and activations from sponsors DHL and Saudia were situated. Smorgasburg provided food and drinks at the E-village with restaurants Jianbing, Vayalo Cocina and the local Red Hook Lobster Pound.

After hours of anticipation, the race commenced at 4 p.m. and attendees sat in the grandstands were shoulder to shoulder and anywhere they could sit in the E-village (many huddled together on the floor with food and drinks).

Last season, racers split their time in two cars and reached speeds as high as 140 mph. This season, racers used one car, thanks to innovations made on the car batteries, and reached speeds as high as 160 mph. Races also have an interactive component called ‘fan boost,’ in which fans can vote for their favorite drivers online or through the Formula E app before the race to give them an extra boost during the second half of the race. Also new for this season is the attack mode, where drivers receive an extra boost for the duration of time if they drive over designated points on the track.

Sebastien Buemi of Nissan e.dams secured the victory on Saturday and Robin Frijns won for the Envision Virgin Racing team on Sunday, but Jean-Éric Vergne and the DS Techeetah team emerged as winners of the competition making Vergne a two-time New York champion.