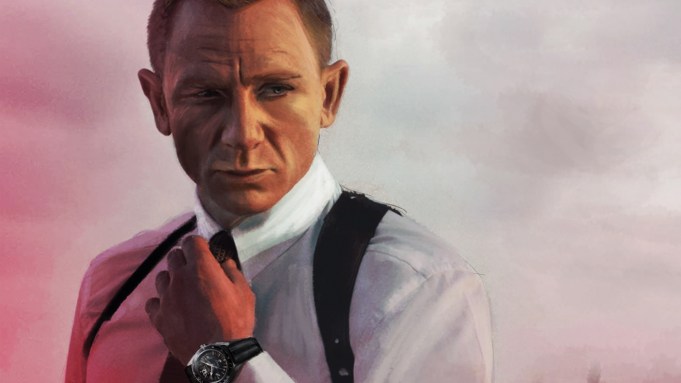 James Bond’s preference in timepieces is just as legendary as the way he takes his martinis — and the super- spy’s watch of choice has been Omega since 1995, when Lindy Hemming, then-costume designer for the film franchise, pitched the watch house about collaborating on a piece.

“She was given the job to — I wouldn’t say revamp, but the Bond image had become a bit diluted in the late Eighties. Or so she told me,” said Stephen Urquhart, president of Omega. “She felt he needed a bit of a facelift, and in terms of the watch, he had a lot of watches, so there was not really a standard message there.”

The pair quickly settled on two criteria for the timepiece.

“Being in the Royal Navy, chances were he would have worn a Seamaster, given our very strong relationship with the British Navy and armed forces,” Urquhart said. “So she was very adamant about that. Secondly, she felt that for Bond, given that he was an educated English gentleman, the color blue was important. So that’s how we started, and we haven’t looked backed since.”

Urquhart noted that while the style of the watch remained relatively the same for the first four films Omega collaborated on, with just small, barely visible tweaks, when Daniel Craig took over the role for 2006’s “Casino Royale,” the actor wanted a hand in determining the look of the piece. “He wanted to give his own touch to the Bond image,” Urquhart said. “At that point, the Seamaster was known as the Bond watch — people would walk in the store and say, ‘I want the Bond watch.’ Daniel Craig chose the Planet Ocean watch, which is quite similar, and he wore that for three films.”

In “Spectre,” which premiered in London on Oct. 26, Craig begins the film wearing a Seamaster style previously worn in “Skyfall,” before being given a new watch by Q, played by Ben Whishaw.

The Omega Seamaster 300 “Spectre” style fea- tures a bidirectional, rotating diving bezel made from black ceramic, with a LiquidMetal 12-hour scale, so that time can be kept with any country in the world, on a five-stripe black and gray NATO strap, where the 007 gun logo has been engraved on its holder.

The timepiece is limited to just 7,007 pieces, and hit retail in September with a price point of $7,500. Each watch has its own unique serial number engraved on the back along with the “Spectre” logo.

The Bond watches are surely coveted by collectors, Urquhart said. “This watch will be on collectible sites, for sure. But when I think about collectors, I think of resale value, and I think this is a very emotional watch. I’m not sure many people are going to buy it just to resell it. I don’t think so. It’s more of an emotional purchase.

“Bond is a very special story,” added Urquhart. “We have nothing else like this. The only similar thing was a limited-edition watch we did for Apollo 13. But even then, we’re talking about a different category of consumers — much more limited and niche. With Bond, there are thousands of people who are waiting and ordering the watch in advance….We definitely have people who are crazy about Bond and want the Bond watch every four years, but I think we’re reaching out to a new customer, also. This film is getting such great press, that I think there will be a lot of people who come back to the world of Bond and become new customers of Omega.”