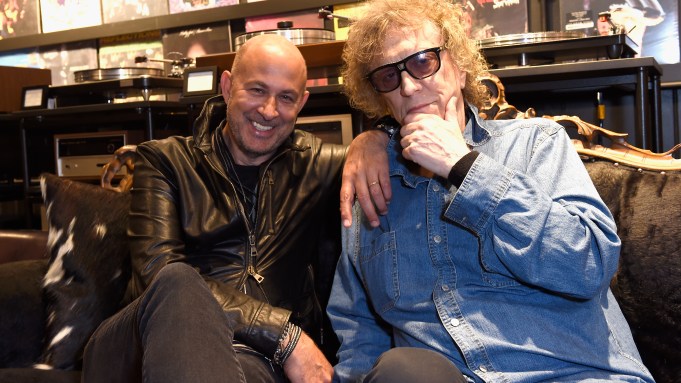 LONDON — With the occasion of the release of his new book on David Bowie, photographer Mick Rock joined longtime friend and collaborator John Varvatos in London to talk about their rock ‘n’ roll icons and the way they have influenced consumers’ ideas of style and fashion.

“The Rise of David Bowie, 1972-73,” which is published by Taschen, documents Bowie during his Ziggy Stardust period in a portfolio of images ranging from shots of the artist during performances to intimate portraits and snapshots capturing Bowie backstage or during practices.

Rock, who first got acquainted with Bowie’s music by picking up a promotional record from Oz magazine, documents the beginning of the glam rock era through his images of Bowie in his Ziggy Stardust incarnation.

“It was all cheap and cheesy because there was [a limited] budget. Even when he started to be better known, it took time for the royalties to come in, so during the Ziggy Stardust period he didn’t have a lot of money around,” Rock said, pointing out that the magic in both Bowie’s music and his style laid in the way he spontaneously fused different references together, from Andy Warhol to Japanese Kabuki theater.

“He produced this special concoction just by synergizing. Yes, he did go to art college but he wasn’t overeducated like me up in Cambridge, where I got overeducated in a way — apart from when I took LSD.”

Looking back at the beginning of glam rock, Rock traces influences of the most flamboyant elements of the hippie era of the Sixties and early Seventies, another style embraced by Bowie, who appeared in a bohemian dress by Mr. Fish on the cover of “The Man Who Sold the World” single.

“That androgynous thing was very big in a certain strain of London hippie. What appealed to us was the prettier side of hippiedom because that’s where all the good looking girls were.”

The unprecedented nature of the fashion was what kept Rock interested; he went on to travel with Bowie and captured him everywhere, from performances to train journeys. He has an archive of over 5,000 images from the Ziggy Stardust period alone, from which he created his book.

“I was interested in things you hadn’t really seen before. That edge always excited me, whether it was Syd Barrett, whether it was Bowie, Iggy, the Punks, or Queen,” said Rock.

The same no-rules approach is what Varvatos was drawn to when he started discovering rock ‘n’ roll.

“The first time I saw Bowie was on the Ziggy Stardust tour, so for me the whole scene was eye-opening. For me, the fashion part of the music when I was growing up was probably almost as important as the music, because when you added that whole other element of style to the show it took it to another level, it connects people with the artist even in a stronger way,” said the designer.

When he started his company in 2000, it was images of a more elegant, simply dressed Bowie that inspired his collections. “He was very simple, but very chic so those were the images that I was thinking about and wanted to create something iconic but at the same time make sure I’m not overdesigning. For him, it was all about the little detail. So he was kind of my muse when I started.”

Varvatos often worked with Rock to shoot campaigns for his label, which embraces the same spirit of Rock’s images of Bowie and Barrett, among others.

“He’s a crazy man when he shoots. He wants the set to be dynamic and exciting, and if there’s a lot of young guys who haven’t been in front of the camera that much and are a little shy, he makes sure there’s a lot of energy and that they’re alert. It’s a bit of a trip to watch it all,” said Varvatos.

“It’s psychadelisizing. You have to be a little bit like a cook, you have to know all the ingredients, and then you mix and you stir and you taste,” added Rock, saying that he tends to get a massage and do yoga to get in the mood before a shoot.

Rock’s new book is displayed at Varvatos stores alongside the clothing, reflecting the two creatives’ close relationship and the fusion of Varvatos’ aesthetic with rock ‘n’ roll.

“For me, when I look through a Mick Rock book, what I see is storytelling. It’s not just a book of pictures, it kind of takes you on a journey. There are a handful of these kind of iconic photographers that capture these moments, and their works put me on stage with the artist, they put me in the first row and make me feel like I was there. And to me that’s transforming. That’s actually how I got connected with fashion; through the music part and through those photographs, because I was too young to go to any shows and there wasn’t any Internet access,” said the designer.