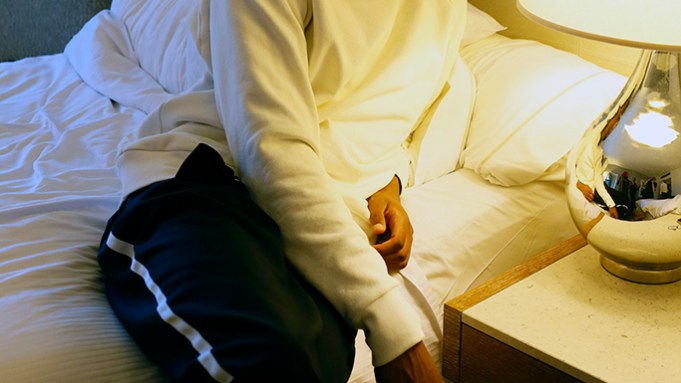 “For me, it’s not about the designer, it’s more about the look,” said the 19-year-old, who is expected to be the Minnesota Timberwolves’ number-one NBA draft pick on Thursday night. “At the end of the day, I’m just trying to wear clothes that make me look good.”

His look of choice for a string of press interviews on Wednesday was a Rag & Bone outfit that included a gray quilted bomber jacket, black-and-white track pants and a white sweatshirt worn over a collared shirt. He topped the outfit off with a pair of royal blue velvet Del Toro high-tops.

Rag & Bone managing partners Marcus Wainwright and David Neville were both on hand at the Westin Hotel in Times Square to meet Towns and talk basketball. The two frequently make custom clothes for NBA players including Carmelo Anthony and Dwyane Wade.

“It’s good for us to broaden our horizons beyond this very small fashion world. We are big basketball fans, so we’ve dressed quite a few people. It’s fun to do, but it’s not easy,” said Wainwright, who was referring to the players’ not-so-usual measurements.

Towns, who already has a stylist, could relate.

“The greatest thing about having a stylist is that you find clothes that mold to your fit and you don’t have to make a universal fit work,” the New Jersey native, who previously played for one year at the University of Kentucky, told WWD.

The 6 foot-11 inch player, whose jovial attitude matches his pronounced features, likes the way Wade dresses — they share a stylist — and similar to Wade, he’s interested in working with more fashion brands down the line.

“I would love to put my ideas on clothes and see the reception I get,” he said.

When asked what he will be wearing for draft night on Thursday, he was mum. “I can’t say.”

His agent and stylist exchanged glances and considered letting the cat out of the bag when Towns politely interjected, “We will release it when they see me at 7 p.m.”