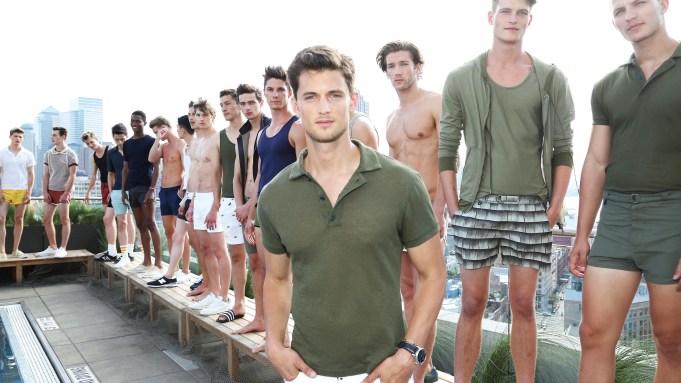 Garrett Neff rose to fame as a Calvin Klein underwear model, and for spring, he’s launching his own swimwear line, Katama. The name comes from a town in Martha’s Vineyard where Neff spent a lot of his childhood and was the inspiration for the high-end collection.

How long have you been modeling?
In 2005, I had one more year of college left and I was taking a summer class in Barbados. I got discovered in the airport on my way back and started modeling at the beginning of my senior year at Bucknell. In the beginning of the year it wasn’t much of an issue, but by the end of the year, Karl Lagerfeld was in touch with my agents so I was flying to Paris in the middle of finals. It got a little crazy, but I finished college and then started modeling.

Did your experience in fashion help you when you decided to launch Katama?
I didn’t know much about fashion when I got into it. I was at the end of the process. I’d be on a shoot, there would be a rack of clothes, but I had almost no idea how they got there. But over the years, I’ve asked questions, I would watch the designers and see how they describe their new collection and what their inspiration was.

What inspires you?
A lot of it comes from my childhood and the things my grandfathers, my uncles and my dad were wearing. There are some photorealism prints from photos I’ve taken on Martha’s Vineyard, a cedar shake, which is a typical siding for houses in the Northeast, a red barn print that comes from a photo I took of a barn that has been in our family since the Civil War. And then I tinkered around with things I thought are typically seen as preppy elements, like the embroideries, and instead of going traditional with a seahorse or ponies, I added some more masculine, Navy Seal-inspired embroideries instead. So we have a Navy Seal mask and Navy Seal-issue fins because my uncle John was a Navy Seal.

How do you stay in swimsuit-ready shape?
I like to run a lot. I play tennis and I like doing outdoorsy stuff — fishing, canoeing. It’s great to get out of the city to do these things.

Do you have a favorite beach?
I really like South Beach on Martha’s Vineyard and Miami’s South Beach. I wonder if there are any other South Beaches; there must be.