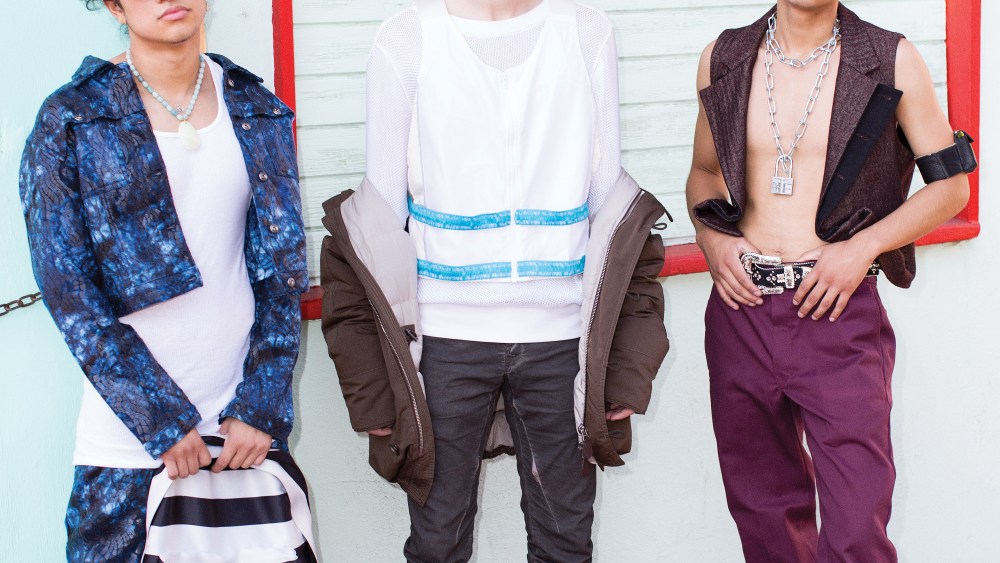 More and more men are having fun with fashion these days, but perhaps none of them show more gusto than Frank Nadolny, Steven Crispin and Derrick Garcia.

The trio of teens met less than a year ago and their bond was instantaneous. Living in Palmdale, a small town located about 60 miles north of Los Angeles, “I never really had friends,” said Nadolny, who’s the oldest at 19. “We met at a party. It was like, ‘Dang — we all dressed crazy.’”

“Crazy” for Nadolny on a recent afternoon comprised blue-and-white striped pants by Christopher Shannon that unsnapped along the seams, Frankenstein footwear he patched together from four pairs of sneakers and a red West Coast Choppers T-shirt that overwhelmed his 6-foot, 2-inch frame. The long-sleeved T-shirt, in size 3XL, belonged to Crispin, who’s at least six inches shorter than Nadolny.

The friends frequently swap clothes and accessories. Crispin, 18, borrowed the rimless Versace sunglasses from Garcia and stole the silver hoop and coin pendant earrings from his mother. He found his yellow Fubu T-shirt at Goodwill and let his baggy blue jeans, also by Fubu, billow at the top of his red-and-black Hood by Air boots.

Garcia, also 18, dressed most appropriately for the scorching sun in an Ed Hardy T-shirt printed with a colorful cross, green corduroy pants he chopped into shorts with a kitchen knife and a black Hood by Air bracelet strapped like an ankle monitor above the brand’s platform boots. Around his neck he twisted Crispin’s white Dior belt into a choker.

Added Crispin: “We probably get the most girls in our city.”

Nadolny, Crispin and Garcia represent a new generation of Southern California men who mash up a variety of influences — cholo, skate, DIY, surf, streetwear, designer labels, even women’s accessories — to create their own unique style. Through Googling, reading old copies of fashion magazines and shopping at thrift stores, directional boutiques and basically any business that catches their eye with an interesting display, this generation is pushing the men’s fashion industry into more adventurous territory.

“We don’t follow fashion trends,” Nadolny said. “We do the frick what we want.”

Of the three, the buzz-cut Nadolny is the only one actively working in the industry. He started modeling when he sprouted to the height of 5 feet, 11 inches at age 15. Now signed with Ford Models, he recently appeared in ad campaigns for Hudson Jeans and American Apparel and in fashion spreads for Numero and W.

Garcia, with his close-cropped do and gender-blurring wardrobe, got his big break as a model in June when he stomped across a sand dune in Hood by Air’s show in Los Angeles. Crispin, who works the night shift as a hospital equipment technician, also tried out for the show, but didn’t make the cut. His consolation prize: the red-and-black platform boots, which complement his shoes from Dior, Chanel and Raf Simons.

Wherever the trio went in their brash getups, attention followed. While they were standing in front of a designer resale store called Wasteland on Melrose Avenue, one man decked out in a distressed T-shirt, dark skinny jeans and Chelsea boots — the very outfit the teens hold in disdain — gave them a condescending glance that ended with a laugh. Minutes later, Robert Balcazar asked to take a picture of them for his Snapchat account. Asked what attracted him to their look, Balcazar, a local stylist who has dressed Tyson Beckford and Calvin Harris, said: “It just screamed L.A. and Melrose. It’s such a hip area.”

Inside Wasteland, Nadolny, Crispin and Garcia made fast friends with other shoppers who had spotted them on Instagram. They were eager to share fashion tips. “Do you know how to legit-check that?” Nadolny asked one guy holding a black Vetements sweatshirt selling for $250. Scrutinizing the logo, they concluded it was a fake because it was screenprinted, not embroidered, on the hood.

After considering a rainbow-colored D2 shirt, snakeskin Gucci biker jacket and white bondage-style Rick Owens jacket, they left Wasteland without buying anything. Walking toward Wild Style, a boutique that stocks Astrid Anderson, Cottweiler and other streetwear designers, they passed a poster for bleached biker jeans by a SoCal premium denim brand. “It’s a rip-off of Balmain ripping off Helmut Lang,” Garcia scoffed. “Style isn’t a commodity. It’s not for sale.”

Sometimes they seem too obsessed with fashion. Garcia cheated death when his BMW SUV flipped over twice. “I got blood on my Dior jeans,” he said. “I wasn’t too happy about that.” Currently car-less, he doesn’t have a phone, either. “But I’ll buy clothes,” he said, noting that he receives messages from his friends on Twitter and Instagram, which he checks on his laptop and iPad. “Clothes are more important to me than a phone.”

Even with all their knowledge of fashion, they’re still a bunch of teenagers at the end of the day. They make up funny nicknames, pretend to beat each other up, endure their parents’ nagging about spending too much money on clothes, jump into mosh pits at rock concerts and suffer the vicissitudes of dating.

On a separate outing to Chinatown, Nadolny griped to his pals about one potential paramour while standing on the handle of a kid’s motorcycle for a social media snap. “She doesn’t text me back and she posts on Instagram all day,” he said. “I hate girls.”

On the other hand, the fairer sex does provide fashion cues. Pulling his hair into a loose bun, Crispin borrowed his girlfriend’s brown Maison Margiela boots with a stacked heel for the jaunt around Chinatown. Although Nadolny cited his dad, an artist whom he called “a skater cholo guy,” as a huge influence on his style, he also nonchalantly tucks his tight Rick Owens jeans into Ugg boots. “I wear white-girl clothes,” he said. “We can wear cropped tops and booty shorts at the same time, but we rock hard.”

They plan to keep experimenting with their style, even after they settle into their careers. Keen on movies, Crispin plans to take classes to learn how to do 3-D animation. Garcia, who does odd jobs like walking dogs, wants to see where his modeling career goes, and Nadolny aims to design. “I will take over a brand like Abercrombie,” he said, “and just make it insane.”