The brand is starting out with men's underwear and socks, and will be expanded to sportswear in September. 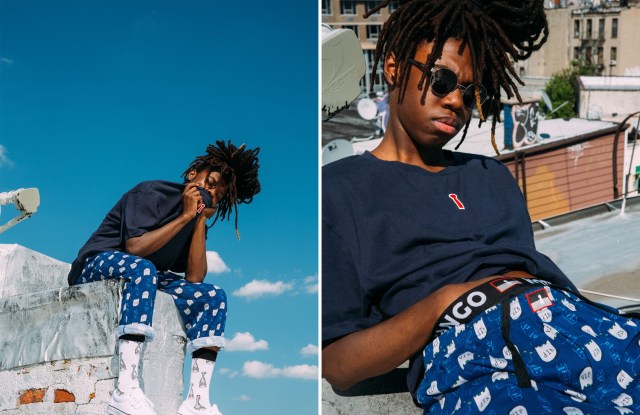 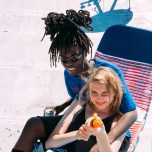 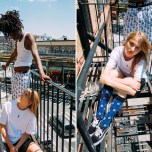 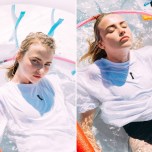 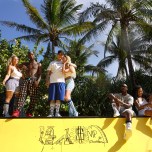 Joining forces with Al-Baseer Holly (Bonic), a rapper turned visual artist, and pro skateboarder Stevie Williams, the longtime friends have launched a lifestyle brand built on “permanent vacation,” an ideal all three founders not only promote but live their lives by.

Named Tango Hotel, the Los Angeles company had a quiet launch last July in Miami (without any product to speak of), where it partnered with Agenda to host the trade show’s kickoff event at Raleigh Hotel, owned by Tommy Hilfiger, with a poolside performance by Travis Scott.

Tango Hotel was launched in select Macy’s stores across the country in June, with a collection of men’s designer socks and briefs featuring original artwork from both Rich Hilfiger and Holly.  It was also shipped to specialty boutiques and is being sold at Tangohotelbrand.com with prices starting at $12 for socks and $25 for briefs.

“The brand is all about the idea of Tango Hotel being a place of permanent vacation, a state of mind,” Holly said.

“The Tango fit is how underwear is supposed to fit, it feels like you have nothing on,” Hilfiger added. “We have the best looking waistband in men’s wear…period.”

While Hilfiger doesn’t have a design background, he’s been surrounded by fashion his entire life. “My whole thing is I love shopping for clothes, I love looking at clothes and I even got into music because of clothes. I do music, and my dad told me about Snoop Dogg and Puff Daddy, and I saw these guys wearing his clothes, and I said, ‘Wow, they make it look cooler than anybody else.’ That got me into hip-hop. I’ve had a couple of false starts and have had a couple of brands that I tried to get off the ground, but this is the first time that it’s really starting to happen for me so I’m excited.”

Hilfiger said he came up with the name Tango Hotel about four years ago, and it was originally going to be a black hoodie line. When he partnered with Williams, who has a company, Dirty Ghetto Kids, he couldn’t do hoodies or T-shirts — because of sponsorships and other competitive factors — but could do underwear and accessories. “I said, ‘I’ll take it, and let’s do it,’” Hilfiger said.

Hilfiger sketches and Holly paints the designs for the underwear and socks.

A few months ago the partners teamed with New York-based Ezrasons Inc., owned by the Cattan family, which helped them get into Macy’s, some skate shops and set up a web site. “They really helped our ideas come to fruition, which is exciting for me. I was pretty underground before that,” said Hilfiger.

Describing the philosophy of the line, Hilfiger explained, “Our slogan is ‘permanent vacation,’ and it’s sportswear for your couch. We make music. We’re in the studio. Stevie skates. Nobody really says Nike is comfortable. A lot of people wear Nike and jogging clothes, but I figure we can make loungewear cool. We say it’s for living and enjoying life,” he said.

In September, they plan to launch at retail sweatsuits, hoodies, T-shirts, tracksuits, beach towels, slides and robes, “all the lazy people kind of clothing,” Hilfiger said. “It’s fun. We just have fun,” he said. It will be sold at specialty stores and online, which will have some exclusive items. He noted that Williams is only a partner in the socks and underwear, and he and Holly are involved in the other categories.

The collection is housed in a little section in Macy’s Herald Square, but everywhere else it is in the denim section. “We feel different from all the other underwear brands. We’re next to Levi’s and Calvin. It’s a new idea and feeling about underwear,” he said.

Hilfiger noted that the business has gotten off to a good start. “We’re doing great in New York, we’re doing great in Florida, Jersey, California and Vegas. Everywhere in between it’s doing as well as it can right now,” he said. The collection is made in China, and the T-shirts are made in Los Angeles. The Cattan family is financing the business.

“We felt East is a natural fit for Tango. He lives and breathes the vibe of the brand, he speaks to our customer, his style and approach to fashion resonates with ours. He gets it. Anyone who has followed Dave’s career knows that his talent goes far beyond making great music,” Holly said. East will wear the brand’s underwear and will do promotional events.

Hilfiger said they’re focused on men’s wear right now, but eventually would like to do women’s. “Women love our briefs and wear our size small, so it’s almost unisex right now,” he said.

Asked if his father is helping in the business, Hilfiger said, “He’s given me a lot of advice about style and his mistakes and his wins. He knows what he’s talking about. I’m trying to take everything I can into account, but it’s really all us right now.”