The Vans x Palace footwear and apparel collection will be available from Palace Shops and Dover Street Market in London and Los Angeles on July 2.

The Vans shoe with the Jeremy the Duck pattern, courtesy of Palace

Image Courtesy of Vans and Palace

LONDON — In a meeting of minds and skateboards, Vans and Palace are collaborating for the first time on a collection of clothing and footwear that will land in store on July 2.

Palace said the collection is inspired by its “newest employee,” Jeremy the Duck, which paddles across Vans’ Skate Authentic style in a contrasting motif. The shoe comes in salmon, black and white.

An image of Jeremy also features on the Palace/Vans long-sleeved shirt, which is available in the same color palette.

Palace and Vans have released a video that features Palace pros Rory Milanes and Danny Brady, and London comedy duo Jonah and Stan, to mark the collaboration. The video aims to give viewers insight into how the partnership came about, and a real-life look at Palace’s perennial Employee of the Month, Jeremy the Duck.

The Vans x Palace footwear and apparel collection will be available from Palace Shops in London, New York, Los Angeles and Dover Street Market in London and Los Angeles on July 2, and in Tokyo and on WeChat China on July 3.

Palace is on a collaborations streak: Last month, the brand upgraded its wheels from skateboards to race cars in a new collaboration with Mercedes-AMG, the sporty, performance division of the German automobile-maker. 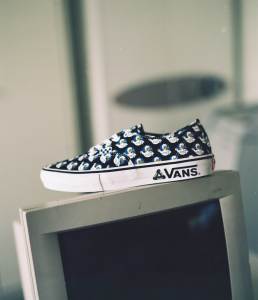 A shoe from the new Vans/Palace collaboration featuring Jeremy the Duck.

The collaboration marked Palace’s debut in the motorsport — and automobile — arena. The brand has designed its first race-car livery, which premiered at the A.D.A.C Total 24 HRS Race on the Nürburgring track on June 4.

The capsule includes Palace staples such as a technical Gore-Tex jacket and trousers, a leather driving jacket, sweatshirts, hoodies, polos and T-shirts. All feature the new AMG and Palace logos, a white saber-toothed tiger and AMG GT3 car graphics.

Palace has also done accessories such as caps, knit beanies, driving gloves, leather totes, skateboards and wheels as part of the collection. The consumer merchandise is sold through Palace stores and online. 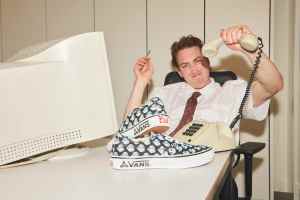 An image from the Vans/Palace collaboration campaign.  Image Courtesy of Vans/Palace

Madhappy reworked the OG Style 43 LX sneaker, featuring stitching in primary colors, the brand name in multiple colors on the sneaker’s tongue and a rare ice blue sole and heel that folds down into a slide. The sneakers come with a set of beads with different colors, letters and symbols for wearers to customize.

As reported, Madhappy’s collaboration with Vault by Vans was a year in the making. The company said it sought Vans for its “quintessential” California footwear and apparel, and for its shared mission to create a sneaker that promotes community. The first customizable style launched on June 15.