The rapper and serial entrepreneur has put his weight — and cash — behind the men’s performance underwear brand. 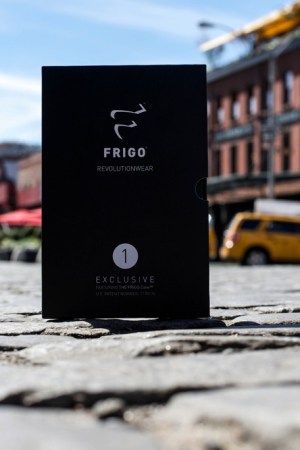 What Are International Retailers Looking for on Pitti Connect?

50 Cent has his sights set on conquering a new category: performance underwear.

The rapper and serial entrepreneur, whose real name is Curtis Jackson, has put his weight — and cash — behind Frigo, a men’s performance underwear brand founded in Sweden by Mathias Ingvarsson, the former president and European director of mattress brand Tempur-Pedic.

Jackson helped Ingvarsson close an $80 million licensing deal last December and he’s designing a collection of underwear for the brand named Frigo Crown designed by 50, which will be in stores this summer.

“You can think of probably four or five different companies that produce high-end underwear for women, but there’s nothing that comes to mind that produces high-end stuff for men,” Jackson said.

Luxury men’s underwear might be an underdeveloped category, but an NPD Group report said as men gravitate toward slimmer bottoms, they’re opting for fitted underwear with stretch. The men’s underwear market grew 3 percent in 2014 and reached $2.7 billion. Active underwear bottoms made from performance and premium fabrics drove this growth, according to the research firm.

Jackson has developed a reputation for investing in new or bubbling categories. He had an equity stake in Vitamin Water, and earned $100 million after Coca-Cola purchased the brand in 2007. He also has investments in SK Energy, an energy drink; SMS Audio — an audio headphone accessories brand — and Effen Vodka.

Ingvarsson, who brought Frigo to the market in 2013, said he always wanted Jackson as a brand partner and approached him a few times before he signed on.

“We wouldn’t have been able to do all of this without 50. He was my number-one choice in terms of marketing the product. He has an athletic body and he’s known all over the world. He’s a perfect partner in a nutshell,” Ingvarsson said.

Ingvarsson is hoping that men will spend $100 on a pair on underwear that alleviate the age-old issues they experience when wearing traditional cotton briefs or boxers. Frigo underwear, which is produced in Europe, is adjustable and features a patented interior mesh pouch that prevents sweating. A silicon lining stops the legs from riding up and the bonded fabric offers a seamless feel.

For the customer who can’t afford the $100 price point of the Exclusive line, Frigo offers Premium and Active collections that range from $20 to $45. T-shirts made from the same material start at $25 and go up to $100.

An inventor who won a Tempur-Pedic pillow contest brought the patented, no-sweat underwear to Ingvarsson’s office. Ingvarsson tried out the underwear and sent samples to friends for Christmas as a joke, but the feedback was so positive he decided to buy the patent and start RevolutionWear, Frigo’s parent company.

Frigo, which means dry and cool in Latin, is sold at Lord & Taylor, Freshpair.com and Neiman Marcus, which carries an exclusive Frigo collection.

“Frigo combines luxury and technical performance, which is a new market in men’s underwear,” Patrick said. “The business continues to grow as our clients experience and learn about the benefits of wearing Frigo’s unique design. Men’s underwear has not changed dramatically for decades. It is refreshing to see a new brand come into the market and reinvent the category.”

According to Ingvarsson, who said the Frigo customer ranges from age 15 to 80, once men experience the underwear’s benefits, the price hesitation fades away. “Fifteen to 20 percent of our revenue in dollars comes from the $100 version,” Ingvarsson said.
Other investors include former Yankee Derek Jeter, NBA Knicks player Carmelo Anthony and music producer Timothy “Timbaland” Mosley have all purchased stakes in Frigo.

“This is a different way of bringing things to market. I believe in endorsements when people put their skin in the game. It’s a testament to the product. From a financial perspective it’s great for us, but they also get a bigger piece of the pie,” said Ingvarsson, who added that other celebrities have approached him to be involved and Frigo is evaluating potential investors.

Frigo hasn’t made a profit yet, but Ingvarsson said the $80 million licensing deal with Robert Leng of Londyn Pilot Enterprises, another investor in the brand, will expedite positive cash flow by removing production barriers and expanding the brand’s distribution into Asia and parts of Europe. Londyn Pilot Enterprises also operates a manufacturing site in New Jersey, which Ingvarsson hopes to use.

For now, category expansion is Ingvarsson’s key priority. He wants to apply the patented technology to swimwear and athleticwear and eventually move into socks, compression shorts and women’s.

“We want to elevate Frigo from a super underwear brand to a super brand,” Ingvarsson said.