The first in a seven-phase project that will see the men’s wear and sports live on the same floor, Men’s Superbrands has opened with 19 boutiques including Louis Vuitton, Gucci, Prada, Balenciaga and Ermenegildo Zegna.

LONDON — With big luxury booming, Instagram pumping fashion and the male consumer choosier than ever, Harrods is making its largest investment to date in a men’s wear floor that aims to capture what is becoming a golden moment for the industry.

Men’s Superbrands partially opened in December with 19 boutiques including Louis Vuitton, Gucci, Prada, Balenciaga and Ermenegildo Zegna. It is the first of a seven-phase project that will see men’s wear and sports live on the same floor, rather than scattered around the store, and is meant to mirror Women’s Superbrands, which opened in 2015.

In February, Burberry will open with a concept designed by chief creative officer Riccardo Tisci, while in April, Dior will unveil the first Kim Jones boutique globally. Men’s Superbrands will eventually span 41,000 square feet on the second floor.

“Last year, men’s had the biggest growth in the store, and men today, especially our customers, want to shop, need to shop and enjoy shopping. This project means we can create a proper destination for every man, for every category. Regardless of price points and what we are selling, we want the environment and the experience to be super rich, super special and luxurious.”

Longland added that, due to social media, men are alive to fashion like never before. “The young guys are coming in with Instagram and saying, ‘I need this.’ It is the power of social media that makes guys come in wanting a style from a brand in a particular color. It’s like, ‘I want Brand A, Style B, Color D,'” he said.

The floor, which is being designed by David Collins Studio, is set to be finished in 2020, and will cover 155,000 square feet, with shoes, contemporary, outdoor, swimwear, personal shopping and grooming among the categories yet to be added.

The men’s wear overhaul is part of a larger, four-year project that will see Harrods invest more than 200 million pounds with the aim of redesigning the store around the needs of the modern luxury customer, with 150,000 square feet currently under development. 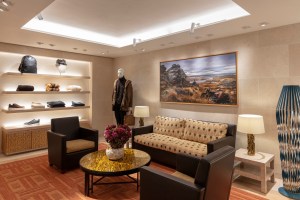 Each of the areas and shop-in-shops at Superbrands will have its own identity: Berluti’s boutique has a bar, a football table and virtual reality screens, while Louis Vuitton has designed a personal shopping suite that can be privatized at a customer’s request or opened to provide additional seating areas for clients. All of the boutiques will have seating and lounge areas.

Certain materials such as black, white and gray marble, and walnut, will recur throughout the entire space and Longland said that domestic touches like armchairs, console tables and lighting will be introduced in every area, too. The store has also left space for pop-ups.

“The floor will be about capsules and celebrating collaborations with our ready-to-wear brands. Our customer is regular, and they need surprise and delight. Pop-ups could be anything, a watch, a fragrance, home accessories, a piece of technology, whatever we think makes sense to the man who is shopping the ready-to-wear in those rooms,” Longland said.

He said that Superbrands — though home to luxury labels — is meant to have a broad appeal. “We did not want it to be either very fashion or very classic, so we have Balenciaga, and Gucci, Brioni and Loro Piana. The father, the son, the grandfather can all shop Superbrands together. Whatever your taste is — classic, fashion or avant-garde — we should be able to cater that.”

That inclusive spirit applies to the men’s floor as a whole: There will be two restaurants, a bar, a barber, a tailor, and bespoke and personal shopping services.

In a separate interview, Amanda Hill, Harrods’ chief marketing and customer officer who is leading the store’s brand strategy, said inclusivity — and looking at categories from a holistic point of view — applies to more than just men’s wear.

“Men’s is a lifestyle floor, not a men’s clothes-only floor. We talk a lot about the art of living and the joyfulness that luxury can contribute to leading a life that’s well-lived. Men are unquestionably spending more money on clothes because the clothes now fit their lifestyles, and they are starting to spend on beauty and on grooming,” she said.

“Especially with the younger Millennial coming through, it is cool to say you are groomed and you are stylish and you’re interested in fashion and beauty. I think it is a shift in terms of the generations being able to embrace all — and not just part — of the luxury offering.”

According to the latest numbers from Mintel and the British Fashion Council, consumer spending on men’s wear in the U.K. grew 5.1 percent to 15.9 billion pounds in 2018. The sector is set to grow by 11 percent between 2018 and 2022 to reach 17.1 billion pounds. Mintel also pointed out that male shoppers are also significantly more likely than female ones to have spent more than 100 pounds in a single purchase.

Simon Rawlings, creative director at David Collins Studio, which also designed Harrods’ Shoe Heaven and the new Fresh Market Hall on the store’s ground floor, said his vision was to create a series of “experiences” throughout the design of the men’s floor “to ensure there is always a sense of drama, intrigue and excitement.” 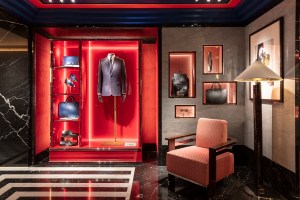 The DCS team also looked to Harrods’ traditional architectural features and re-created the store’s logo in leather stitching, marquetry and bronze inlay in stone across the floor.

Until now, Harrods’ men’s wear business had been split between the lower ground floor, the ground floor (where men’s wear had traditionally sat for more than 80 years) and the fifth floor, and Longland said it was a huge opportunity to start from scratch.

“This isn’t a version of what someone else has done. It is truly unique, super Harrods, and it gives customers somewhere they really want to come regardless of age or nationality. It should appeal to everyone,” he said.

Michael Ward, managing director at Harrods, said the men’s business “has experienced a quiet revolution” over the past few years in terms of innovation and customer demand, “and within Harrods it has gone from strength to strength.”

The overhaul of the men’s department follows those at Harrods’ fine watches and jewelry, the first stage of the food halls redevelopment and the launch of the Wellness Clinic in 2017. Over the next year, Harrods will also be turning its attention to its home and beauty departments as well as stage two of the food halls in addition to the men’s floor.

Harrods is the latest major London store to rethink its men’s spaces: Liberty recently revamped its lower ground floor men’s department, while Selfridges is in the process of reworking its men’s offer. Late last year, the latter opened an 18,000-square-foot concept space, The Designer Street Room, with its own skate bowl, grooming and beauty areas, geared mostly at men. The store is also revamping its other men’s areas.