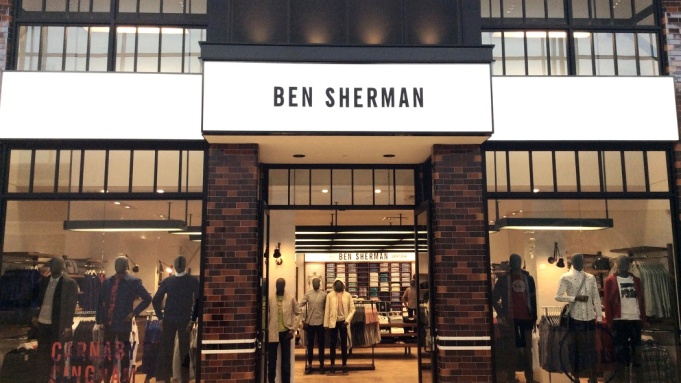 “It wasn’t mismanaged, it was not managed.”

Marquee, an acquisition, licensing and development company that was formed in 2014, purchased the British men’s wear brand from Oxford Industries last July for $63.7 million. The London-based brand had suffered under Oxford primarily because the group put more emphasis on its other brands and Ben Sherman fell by the wayside, Baker believes.

“Oxford has very successful Tommy Bahama and Lilly Pulitzer businesses and wasn’t putting any focus on Ben Sherman,” he said.

Since acquiring the brand, Marquee has transformed the label into a licensed model, signed up partners in the U.S. and overseas to expand product categories and add retail stores, and kicked up its marketing message. The company is projecting that global sales will quadruple within the next five years.

“The key for us is to answer the question: If this brand disappeared, would anyone care,” said Michael DeVirgilio, president of Marquee Brands, who joined the company after 17 years at Kenneth Cole. “We put Ben Sherman through that test and found that there was recognition, and consumer demand is higher than the distribution. So we’re bringing product to the people who want it.”

Ben Sherman, which began in Brighton, England, in 1963, has its roots as a young men’s, “Mod”-inspired shirt line. It has since evolved into a lifestyle brand targeting men between 25 and 40 years old. Oxford acquired the company in June 2004 for $146 million.

Baker, a lawyer who helped Iconix Brands double the size of its portfolio during his tenure there, said that “starting brands and building brands is a tough business. We would rather build from assets, legacy and heritage. It’s easier to curate than create.”

The executive stressed that there is “nothing wrong with Ben Sherman as a brand.” Its originator was a leader in bringing color to a drab dress-shirt market by introducing vivid colors and patterns, a strategy that he soon extended into other products as well.

“Ben Sherman was a visionary,” Baker said. “The brand always had a reason to exist and it’s now our job to telegraph that.”

Under the Marquee operating model, there is a creative director based in London — Mark Williams — who is on the Marquee payroll and works closely with the licensees to ensure a consistent fashion message. Williams comes up with the seasonal trends and analysis, colors and fabrics and “then the licensees execute it,” Baker explained.

The brand is in several categories including tailored clothing, footwear, children’s wear, optical and sunglasses, sportswear, outerwear, neckwear, cold-weather accessories and luggage. Women’s is expected to be launched in the future. Baker said that historically, women’s accounted for as much as 30 percent of the business internationally, “so demand is there.”

Right now, there is no distribution in Korea, Japan, China, India, the Middle East and Latin America, DeVirgilio said, where there is a potential of $1 billion in retail sales. But Marquee will reveal today that it has signed a deal with MRH SpaRotica Groupe to distribute the brand within Greater China. The deal will include a retail rollout that includes at least five freestanding Ben Sherman stores this year, with at least another 30 in the plans for coming years. The first store will open by August in Shanghai, followed by Jiangsu, Hubei, Hunan and Sichan.

A deal for the Middle East is also close to being finalized and will result in the opening of 18 stores in that region.

Today, Ben Sherman has 52 stores around the world, “but there will be over 150 to 200 in three to five years,” DeVirgilio predicted.

In the U.S., Marquee closed Ben Sherman’s three stores because the locations were not “optimal,” Baker said, saying the 5,000-square-foot SoHo store was just too large and the units in the Beverly Center in L.A. and in San Francisco were mired in problems. But the company expects to open 10 to 15 units here within the next three to five years, he said, and will return to SoHo.

Baker said that overall, Ben Sherman’s business “can easily quadruple” in the next five years. The executives believe there is “brand fatigue” at retail, especially in the U.S., so there’s a hole that Ben Sherman can fill. “Walk onto any men’s floor and it’s Calvin, Ralph and Tommy, repeat,” DeVirgilio said. “There’s no excitement from a brand and experience standpoint.”

Marquee is ready to invest to make that vision a reality.

The company is not the typical private equity player. Instead, it’s bankrolled by a global asset management firm named Neuberger Berman that manages $240 billion in assets and has $500 million of committed capital for acquisitions.

DeVirgilio said that unlike Authentic Brands Group, Iconix Group or Sequential Brands — which own trademarks and act as pure licensing companies — Marquee sees itself more of a brand steward. “We’re not buying royalty streams,” he said. “We buy brands because we want to make them better.”

Baker added: “Just because we have private equity money behind us, we don’t run like a private equity firm. We’re not in this to sell in three to five years. We have a long-term view.”

DeVirgilio stressed that because of the money it has behind it, Marquee has no need to leverage the businesses it buys either.

Marquee’s first acquisition was Bruno Magli, a luxury shoe brand that was founded in 1936, that Marquee acquired in early 2015. The company stabilized the business, relaunched its women’s collection and named actress Lucy Liu as its ambassador, signed a license with Marcraft Apparel Group to produce the first men’s tailored clothing collection and mapped out plans for a retail rollout in the U.S. and Europe.

Now Ben Sherman is the focus. Step one was the brand’s return to the fashion world — it held its first presentation in London on Wednesday on the eve of London Collections: Men, which starts today.

Other marketing initiatives include tweaking its branding and logo to focus on its British heritage and the Union Jack. That logo was front and center on the fleet of Ben Sherman taxicabs that drove editors around New York City earlier this year and VIPs and influencers to the MTV Awards and Coachella in California. The brand is also sponsoring the New York City Football Club, has flooded outdoor spaces with advertising in New York, London, Berlin and Cologne, Germany, and the brand also instituted a print ad campaign.

“These are things the former ownership just didn’t do,” DeVirgilio said. “The year before we acquired the brand, they spent $35,000 on marketing. We spent that much an hour after we bought it.”

Now that the Ben Sherman strategy is being implemented, what other brands might Marquee be interested in adding to its stable?

Baker said the goal is to “acquire brands that people want, not dead brands.”

DeVirgilio added: “We’ve probably looked at 250 deals in the last 12 months in the consumer brands sector.” The goal is to diversify, the company said, so some additions may be in the mass sector, athletic arena, food and beverage — a strategy that allows Marquee to mitigate risk if one industry goes south.

The company is looking at brands outside the U.S. as well. “We’re not U.S.-centric,” Baker said. “There are very significant brands that are hugely impactful in Europe and Asia and we don’t want to have a myopic view.”