Nicolas Bijan at the House of Bijan store on Rodeo Drive.

Since 1976, the Bijan men’s wear boutique has been a fixture on Rodeo Drive, and its happy yellow facade with matching yellow exotic car parked out front one of Los Angeles’ most-loved tourist stops — even if the store itself was open “by appointment only” for the U.S. presidents, Saudi princes and Chinese billionaires who could afford the $12,000 suits and $950 ties inside.

Now, four years after the original two-story building was sold to LVMH Moët Hennessy Louis Vuitton for $120 million, Bijan has a new location across the street at 443 Rodeo, where Nicolas Bijan, 29, is hoping he can continue to follow in his father’s footsteps making experiential retail magic — with a self-aware wink.

If there’s any time for that, it could be now, when shoppers need a more compelling reason than ever to venture out to a brick-and-mortar store. One resembling a museum, that’s private, by-appointment-only, and an only-in-Beverly Hills experience, would certainly seem a draw.

“There wasn’t a parking spot out front, but the City of Beverly Hills was kind enough to let us build a new one,” he said during a tour of the 8,000-square-foot store (nearly 50 percent larger than the original), recently completed after a 2 1/2 year, $12.5 million investment. “Just in time for the crowds to start coming back to Rodeo Drive, there will be a yellow Rolls-Royce, or more likely a Bugatti.”

Founded by the late Bijan Pakzad, the brand billed as “the most expensive and exclusive in the world” was once synonymous with Eighties power dressing, making limited-edition, custom suits and ties worn by George H.W. Bush, Carlos Slim, King Juan Carlos, the Shah of Iran, Michael Jordan and many more who are enshrined in the silver picture frames dotting the new store, just as they did the old one. 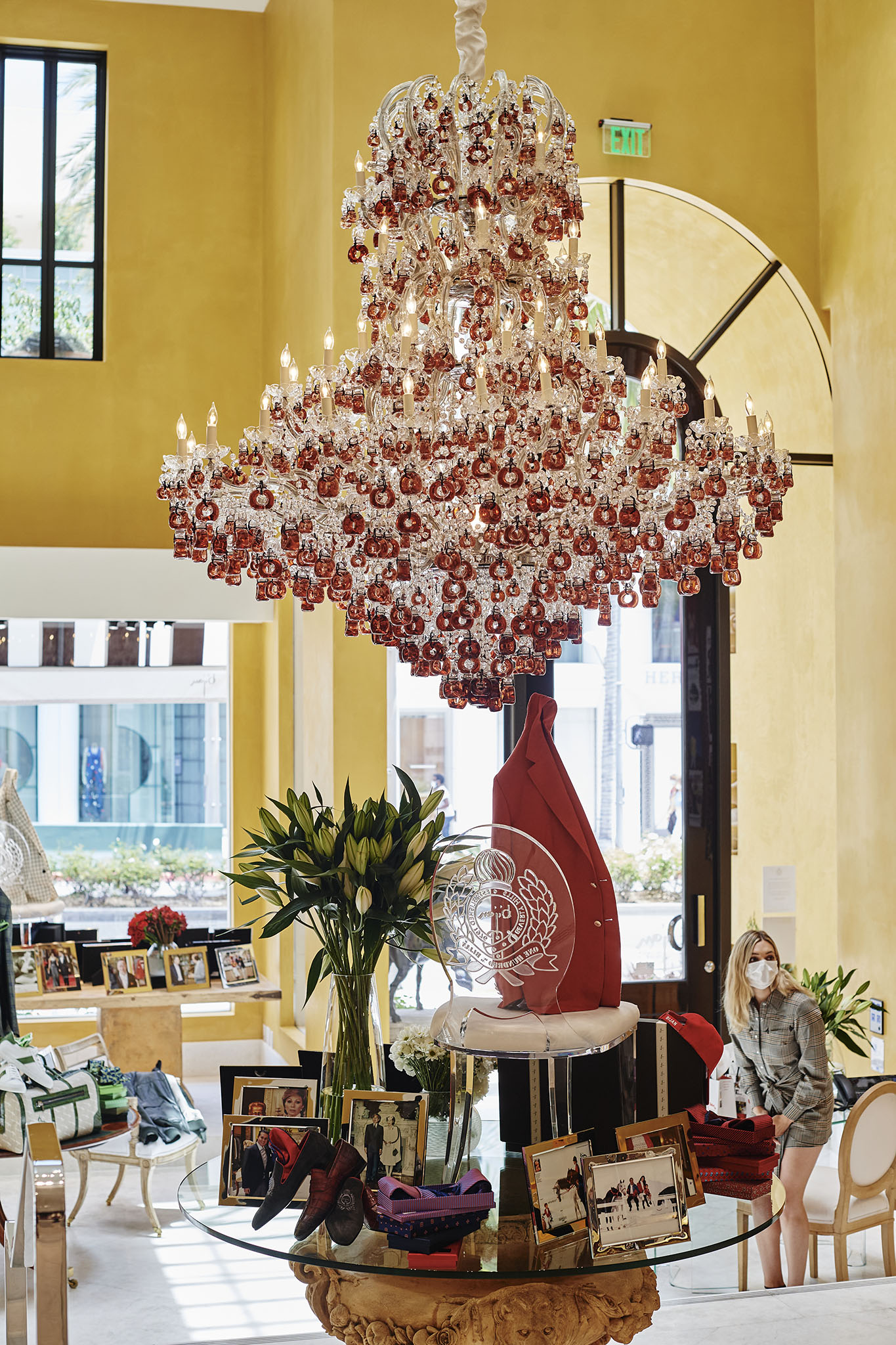 An Iranian come to L.A., Pakzad was a master marketer. Before Tom Ford or Karl Lagerfeld, he understood the cult of personality in fashion. By starring in his own billboards and controversial ads (one, ahead of its time, featuring full-figured models after a Bottero painting that hangs in the store), he was able to grab headlines and spin the allure of over-the-topness into licensed fragrances that powered the business for a time.

“We sold 6 million bottles before I was born,” said Nicolas, dressed in a navy blue and white, pinstripe, cashmere, double-breasted suit he designed, along with gray alligator shoes, declining to share current sales for the business. He was still a student at Pepperdine University in 2011 when his father died. He continued his studies at night, so he could step in to work alongside longtime chairman, cofounder and 50/50 partner Dar Mahboubi, who owns the Rodeo Drive real estate where the new store sits.

“My mentality was, school will always be there but our business might not be,” said Nicolas, who first worked for Bijan for a summer job at age 15, where he clearly learned the power of brand myth-making. “I remember looking out the window one day and the whole street was empty, it was very odd to see Rodeo Drive completely empty. Then two to three minutes later Secret Service cars pull up and you see President [George H.W.] Bush in the back waving; he just stopped in to surprise my dad and say hello. I don’t know how I could not want to be part of the business.”

Over the years, the Bijan aesthetic seemed trapped in amber like perfume in the store’s famed chandelier, which is made from 1,000 of the donut-shaped glass flacons. But when a new generation of wealthy Chinese discovered the brand in the mid-Aughts, the clothing, fine jewelry and accessories sales began to eclipse the fragrances.

Indeed, in this era of peacockish men’s wear, the brand’s classic pieces with the occasional ultraviolet-hued sports jacket, or $200,000 mink-lined crocodile coat that one can only get in limited editions, and at two stores in the world — Rodeo Drive and the Wynn Las Vegas — have new currency and new competition. 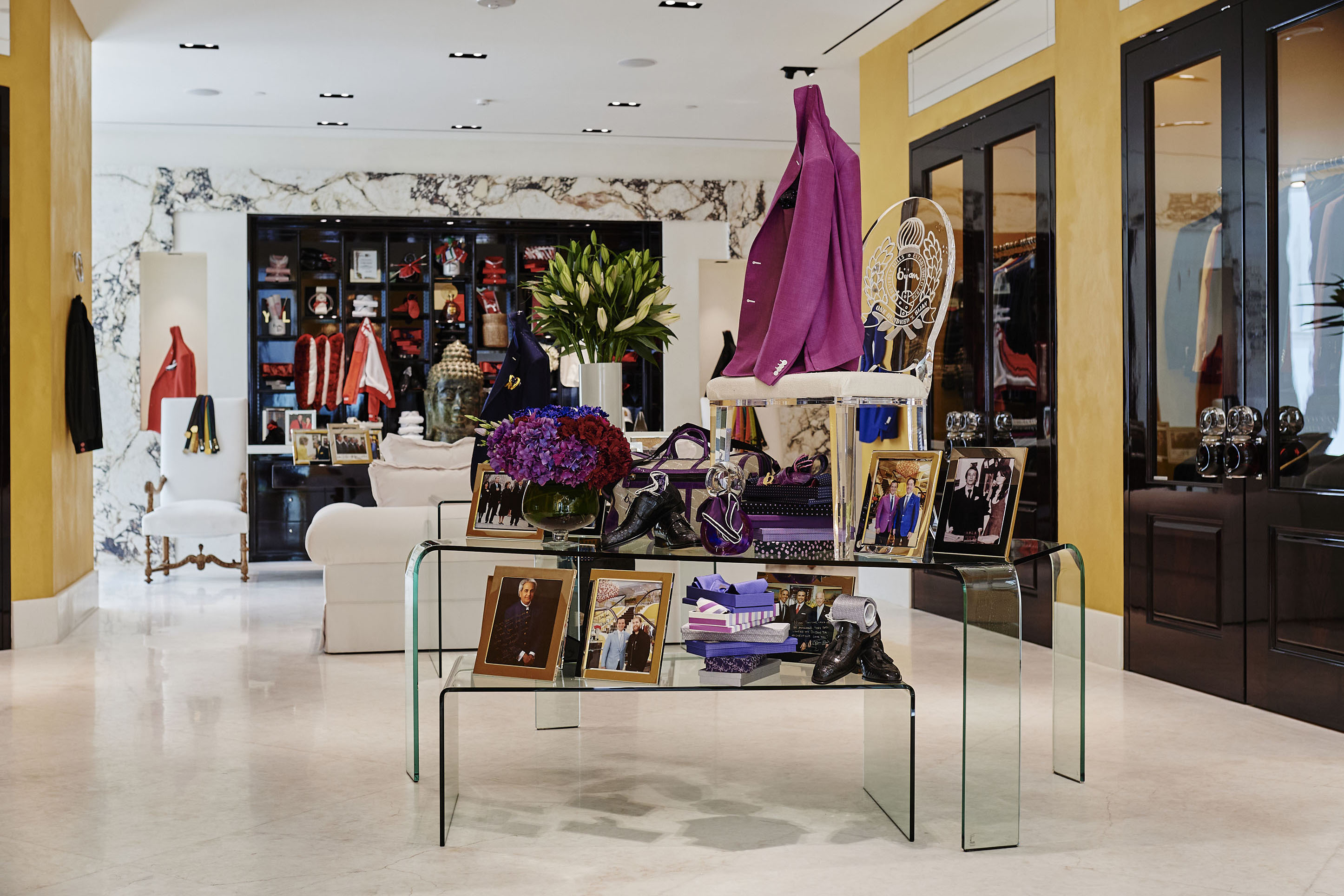 But even after having to close for three months, Nicolas remains cautiously optimistic about recovery, just as his father was after 9/11 and the recession. (Among some of the more unusual requests Bijan has fulfilled over the years — designing a custom yellow Porsche interior for a client in Qatar, and creating a different collection of fragrances for each of Prince Jefri of Brunei’s palaces — reportedly a $46 million project.)

Business today is still international, with Nicolas traveling to England, Afghanistan, Nigeria, Russia, the Gulf States and beyond for clients “who spend millions of dollars a year with us.” But the majority of sales are now in North America — New York, Miami, Dallas and Silicon Valley.

“We want to be sensitive of what’s going on world, but there will always be an appetite for luxury. A lot of my clients when they come in here, they don’t need anything. They don’t need another jacket or tie, they are just having a good time. They like to feel good.”

Some are private, but most don’t mind having their pictures displayed. 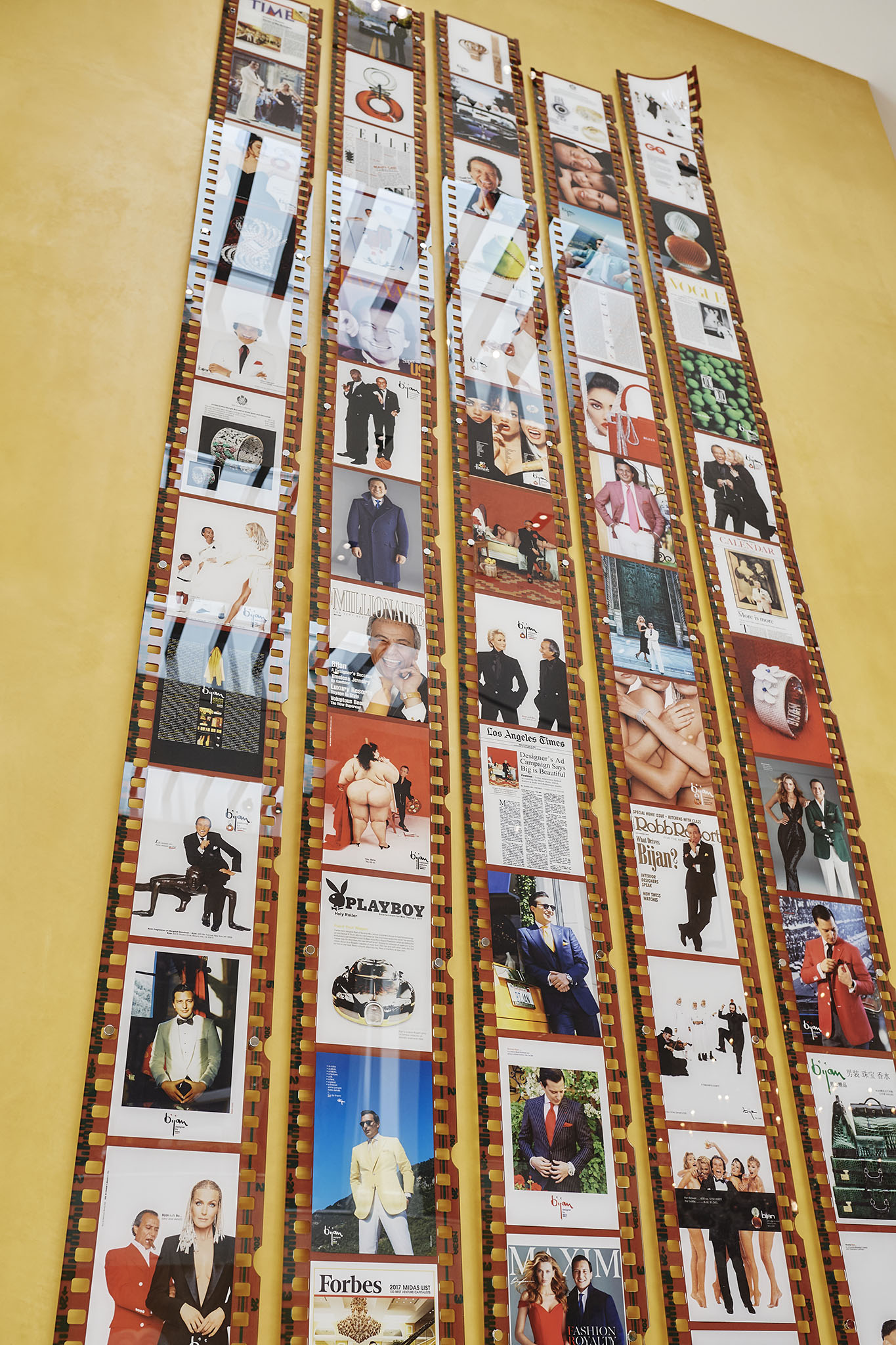 “Here’s my father with President Obama and Joe Biden, here with Jeff Bezos. Rick Caruso is always wearing Bijan — he makes our clothes look fantastic. Here we have a picture of the Emir of Qatar, he’s a young man, a third generation client,” Nicolas said, proud that those in his own age bracket seem to be discovering Bijan’s classic if ever-so-slightly cheesy charms.

“We have so many of our clients’ children and grandchildren wearing our clothing, and that’s really happened in the last six or seven years. We’ve seen the average age go from 50s and 60s to younger,” Nicolas said, pointing to a pair of kangaroo leather sneakers he’s added to the mix.

“We have to evolve and change with the times. If people want vicuna sweaters instead of a vicuna topcoat, we have to offer it. Now we have suede loafers with no back to use on your yacht, and baseball caps (and that’s an homage to the Nineties, when my father did them). We took a couple casual letterman-style jackets my father did at that time and remade them, and immediately they sold. We have been staying true to our timeless and classic clothing but also expanding into new product lines, younger product lines, things for more people.” 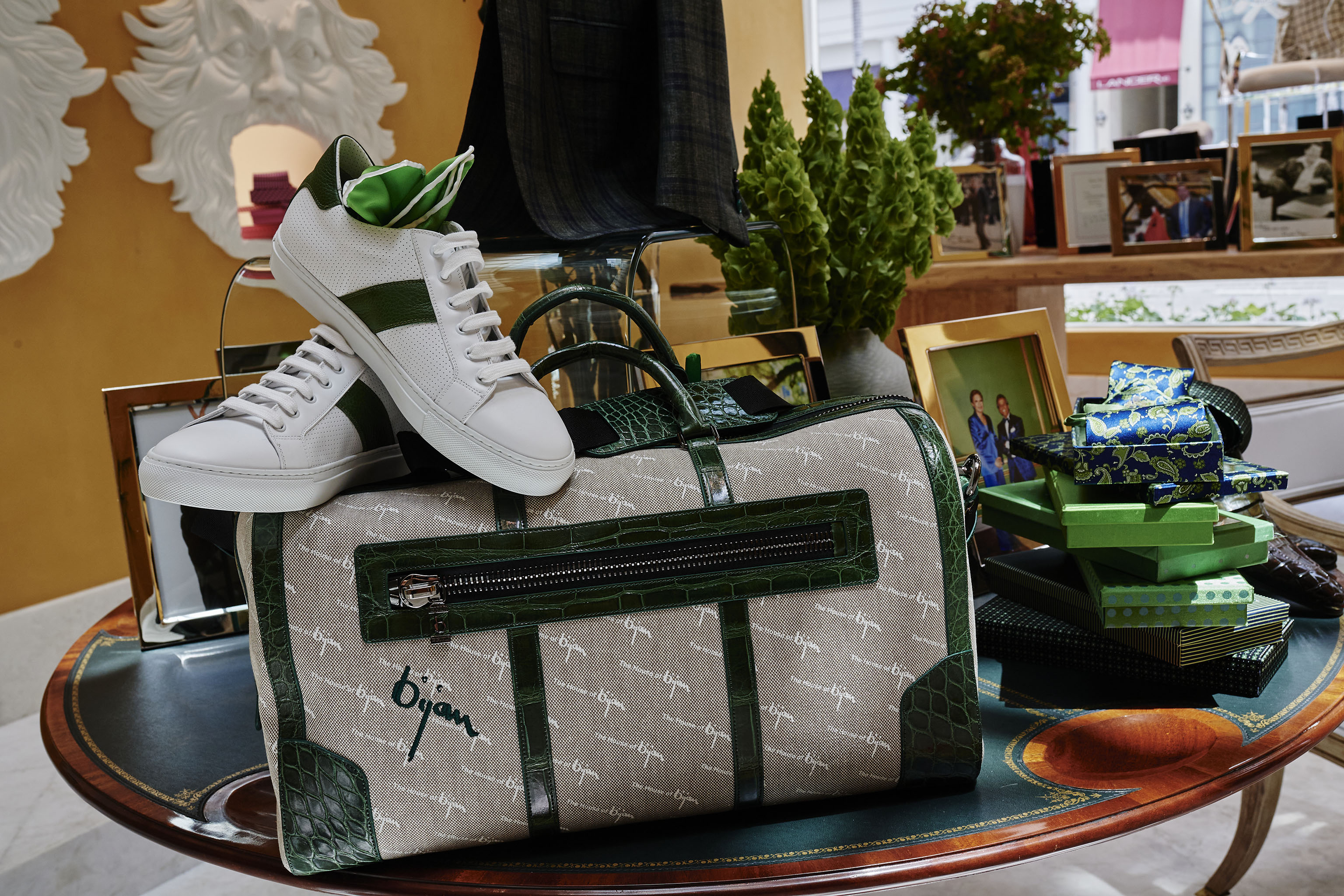 There are no clothing racks. Instead, oversize armoires with perfume flacon doorknobs open to reveal color-coordinated displays of one-of-a-kind purple and gray leather jackets, cashmere raincoats, pinstripe sports jackets (using fabric that can cost up to 900 euros a yard) and silk ties, all made in the Bijan factory near Lake Como. Nestled within are a one-off yellow crocodile handbag, a mink throw made for a series of Bijan Rolls-Royce Phantoms, fresh flowers and fruit.

“Even Mr. Caruso sends his execs here to see how we merchandise so he can train them and show them how to be more experiential,” said the young executive, who lives in Taylor Swift’s former Beverly Hills home. (And for the record, anyone can make an appointment to come in. Despite what the tour bus operators feed tourists, you don’t have to put down a $1 million non-refundable retainer.)

Although he hasn’t reached the $1 billion valuation and five store goal he shared with WWD in 2017, he’s proud of how he’s balancing old and new.

“I’ve caught quite a few big-name designers looking in our window early in the morning,” he said, adding that Tom Ford added his own by-appointment showroom down the street. “Just like us, he has got a lot of younger people dressing up…those who want something even more exclusive and expensive are coming to us.” 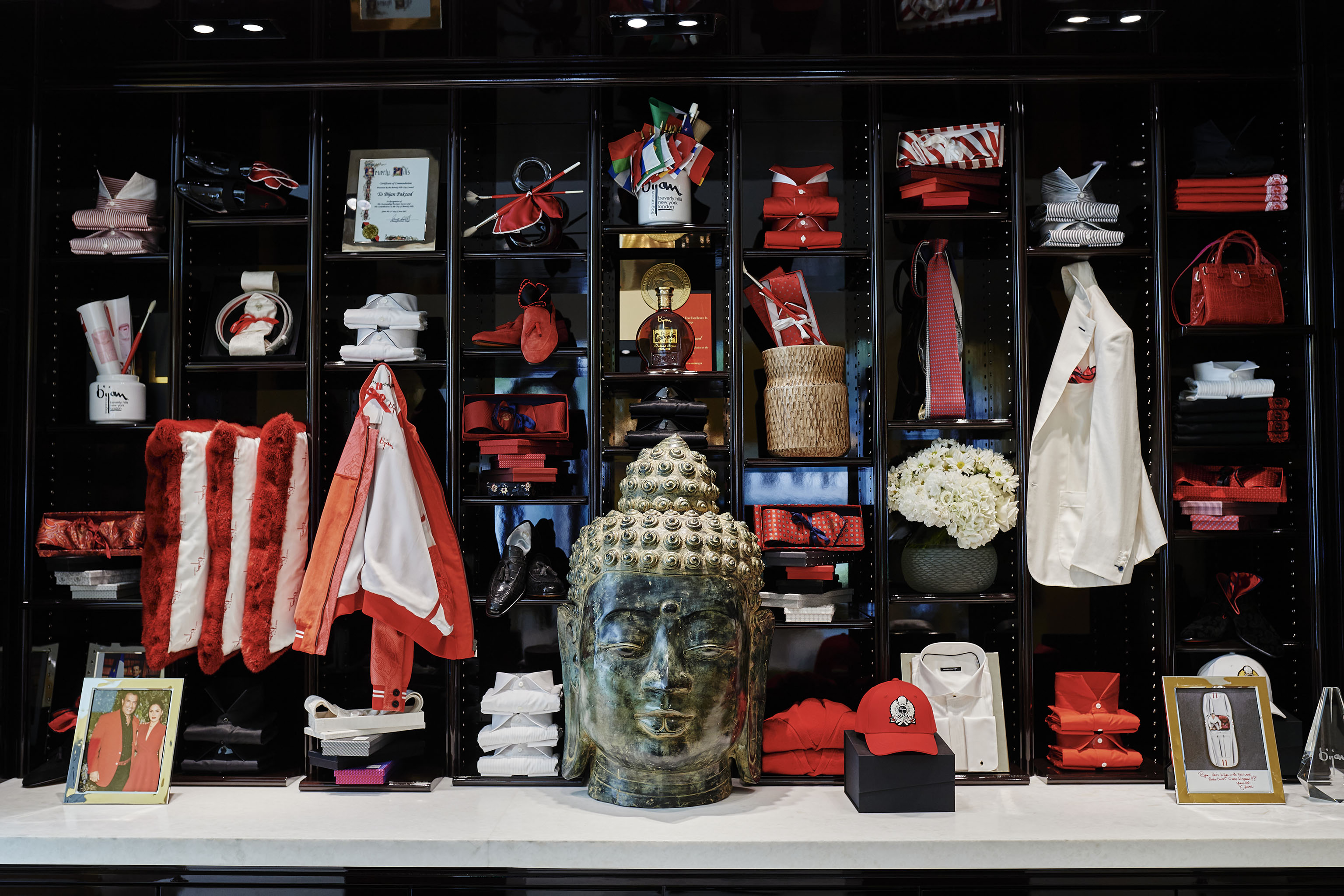 On the humor that comes up around Bijan, Nicolas continued, “I understand we are not a brand for everybody, but that is what has allowed us to be successful for the past 44 years. The car, for example, it’s become the most photographed thing in Beverly Hills. And 99.9 percent of people who take a picture with that car are not shopping with us, they are maybe shopping in some of our neighbors’ stores. But that’s fantastic, it adds to the glamour of Rodeo Drive, the uniqueness of our brand and this store as a destination. It’s cheaper than a billboard, and on top of it, we’ve turned it into successful collaborations with Rolls-Royce, Bugatti and now with Aston Martin.”

For the car-selfie crowd, he recently launched the brand’s first e-commerce, selling T-shirts, polos, hats, ties and $40 Bijan-branded face shields. “I wasn’t sure if we should put the logo on the shields or if it was in bad taste,” he said of the PPE originally designed for frontline workers, and later produced for consumer use, with proceeds going to COVID-19 relief. “But I was driving in the flats of Beverly Hills the other day, and I saw two ladies walking in them.” 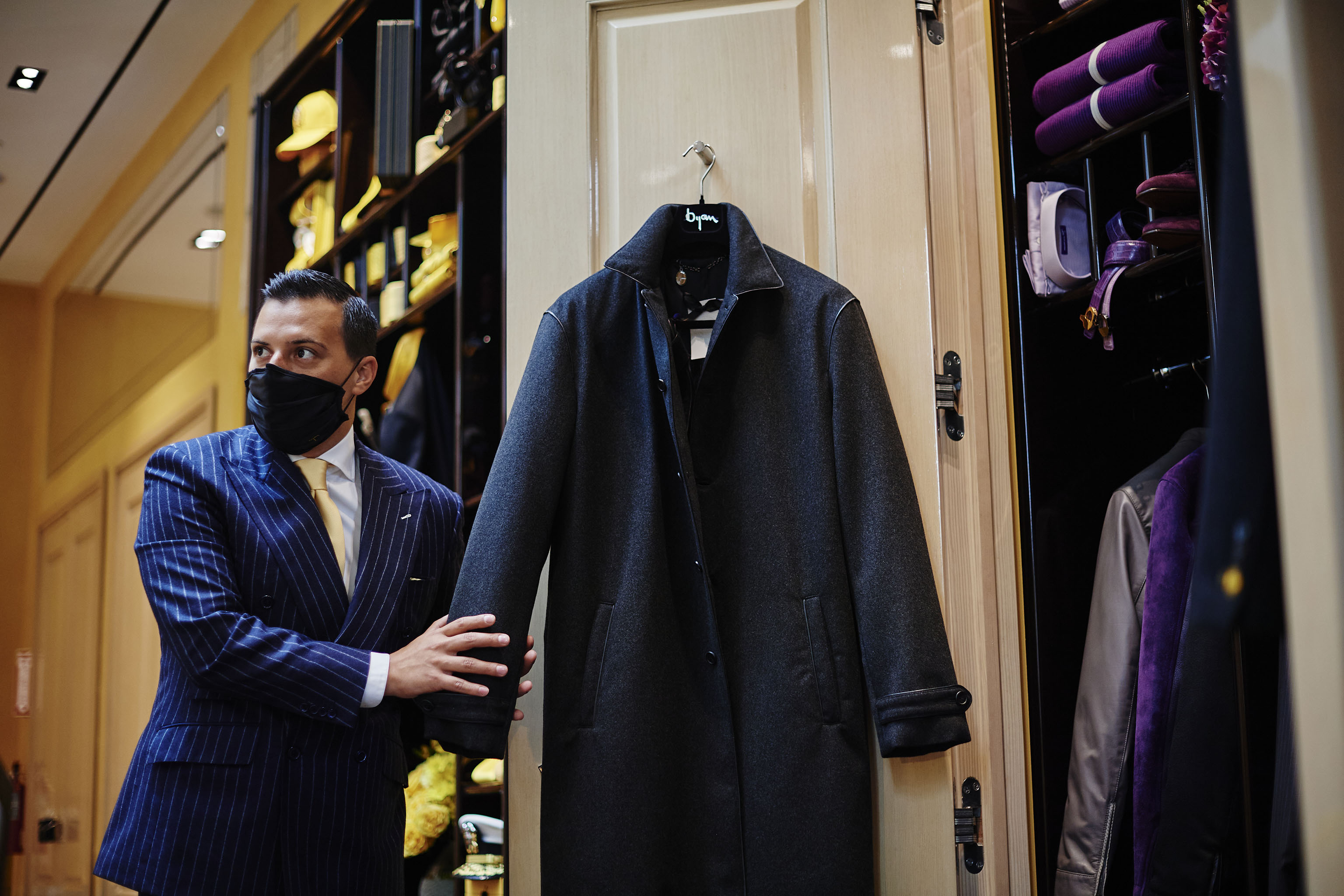 Nicolas Bijan at the House of Bijan store on Rodeo Drive.  Michael Buckner/WWD