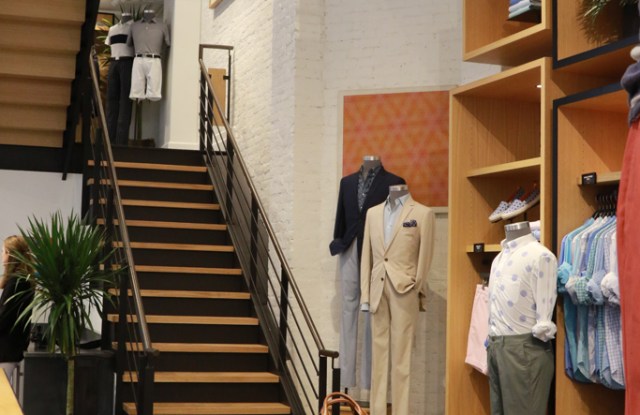 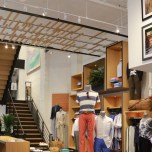 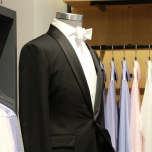 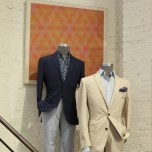 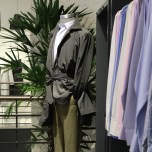 NEW YORK — Bonobos is stepping up its game.

The online retailer on Thursday will open its largest Guideshop to date, a three-level, 4,000-square-foot shop at 95 Fifth Avenue in the Flatiron district here. The store formerly housed Kenneth Cole.

Unlike the other retailers in the neighborhood, the Bonobos store stocks no inventory. Instead, it is a retail showroom and offers merchandise from the company’s Web site that customers can try on with the help of in-store “guides” — sales associates — and then order. The merchandise is then delivered the next day if it’s in New York City, or within a day or two outside the city.

“To have a real presence on lower Fifth Avenue in New York City, we needed something meaningful,” said Francine Della Badia, Bonobos’ new chief executive officer in her first interview since joining the company 12 days ago. She was most recently at Coach as president of North American retail and has also worked at Victoria’s Secret, J. Crew and Gap Inc.

Della Badia is embracing this new retail format and points out several advantages to traditional stores. “When you walk in, you don’t have to sift through piles of clothes to find your size,” she said. “The product becomes the focus.”

The operating model is different as well. “There are no cash registers, no shopping bags, tissue paper or stockrooms — all the square footage is selling space,” she said. “There’s no inventory to maintain at the store level. And the staff is completely devoted to selling.”

The scale of the location allows the company to expand the options it can show to customers. Most of the other Guideshops are around 1,500 square feet, although the second-largest one, in San Francisco, is 2,500 square feet.

The Flatiron store carries one of everything on Bonobos’ Web site and offers a full array of sizes. Customers can either make an appointment with a guide online in advance or walk in off the street. Bonobos says a fitting takes less than 45 minutes and is complimentary.

Della Badia called Bonobos’ Guideshop concept “disruptive” and expects it to find fans among shoppers. “In terms of men, they don’t want to carry bags around,” she said. “Here, they place an order and walk away without having to carry anything.”

There are currently 17 Guideshops around the country and three more are slated to open by the end of the year, in Seattle, Atlanta and an undisclosed city in Texas. The concept started in 2011 and although other digital players are opening brick-and-mortar locations, Bonobos said the Flatiron store is believed to the largest e-commerce store of its kind in the U.S.

“People still want the tactile experience of being in a store,” Della Badia said. “And shopping is still social. With online shopping, it’s just you and your Mac. Here, we create a sense of community.”

Andy Dunn, Bonobos’ founder, who has transitioned into the role of executive chairman, said it took him five years to convince Della Badia to join the company. “Every year I would ask and she would laugh, but the laughter got slightly less,” he said.

Della Badia said she decided to join Bonobos because the company has evolved and grown. Although they declined to reveal sales volume, Dunn has said the company has experienced substantial growth over the past year. In addition to its core online business and the 17 Guideshops, Bonobos is carried in Nordstrom and Belk.

Although they declined to provide a percentage figure, Dunn said the lion’s share of the business continues to come from its direct-to-consumer model. But he believes there is a “place for great wholesale, especially for growing brands. We’re humbled by the traction we’ve gotten at Nordstrom.” Dunn said the company’s signature chino and short are the number-one sellers in those categories at the retailer.

The company also has a golf line called Maide by Bonobos as well as a burgeoning women’s label, AYR, both of which Della Badia will also oversee.

Both the golf and women’s labels are available in the Flatiron store, but the bulk of the assortment is focused on the core men’s line. Sportswear is merchandised on the ground floor, Maide is located on the second level and a significant tailored clothing assortment, including tuxedos, shirts and ties, is on the third level. AYR is also on that floor.

There are more than 12 fitting rooms in the store, which features white oak fixtures, trellises, exposed washed white brick and reclaimed pine floors.

The company’s growth has been fueled in part by a $55 million series D round of funding it received last summer. Led by Coppel Capital, the funding brought total capital raised to over $127 million.

Dunn said he has no plans to raise additional money and there are no immediate plans to take the company public.

“We would like to build a standalone company,” Dunn said. “And we have no specific plans for an IPO.”

Della Badia added: “I’m focused on growth and if options become available in the future, great. But for now we’re focused on building brand awareness.”