Their core customer ranges from curious and adventurous business professionals to creative types. 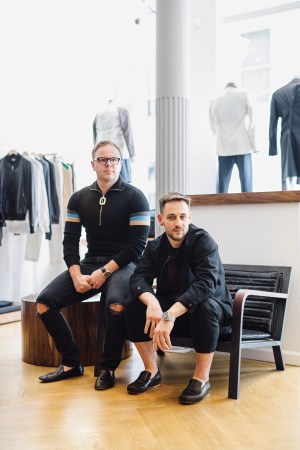 When they opened their men’s wear boutique Carson Street Clothiers on New York’s Crosby Street in 2012, Brian Trunzo and Matt Breen were only a few months removed from their careers as lawyers. Their past profession’s dress code, which was primarily suits, was reflected in the first iteration of the store, which was rustic, cozy and well stocked with tailored clothing.

Now they are creative professionals who wear J.W. Anderson sweaters to work, and as they’ve gotten knee-deep in the fashion field, they’ve gained new friends and a new taste level.

“I have two distinct groups of friends. I have my former life friends, who to this day still don’t believe I am in this industry. And I have friends I’ve met since joining this industry, who almost all now work at Grailed [a streetwear resale site]. They are more in-the-know,” Breen said.

This dichotomy is on full display at their new, 3,300-square-foot Carson Street store — they’ve shut down the Crosby Street shop, which was about half the size of the new unit and nixed “Clothiers” from the name. Now the brand roster skews more toward progressive designer — think Jil Sander, E. Tautz and Lemaire — but the pieces are still merchandised through a Carson Street filter.

Trunzo and Breen say their designer choices are more wearable, classic and sophisticated than a department store buy that might include the entire line. “We are buying beautiful clothing as opposed to buying ideas,” Trunzo said.

According to the cofounders, their core customer ranges from curious and adventurous business professionals to creative types. One segment of their customer base is confused by Craig Green while the other wears it as a badge of honor.

Trunzo said the brands that resonate with all of the store’s customers include Greg Lauren and Neil Barrett.

They are hoping their new brand, Deveaux, which is a completely separate business from Carson Street, will have a similar effect.

The line is designed by Breen, Trunzo, and Patrick Doss and Andrea Tsao, who’ve held positions at Sid Mashburn and Michael Bastian, respectively, and launched at New York Fashion Week: Men’s in January. The collection, which is made entirely in the U.S., will be sold at Carson Street starting this fall. It will retail from $150 for cotton T-shirts to $4,995 for shearling outerwear.

Breen said Deveaux will make up 15 to 20 percent of the Carson Street store and it will also be carried at Totokaelo, United Arrows and Biotop in Japan, and Spruce, a men’s wear store in Chicago that’s set to open this year.

In addition to Deveaux, they are focused on building out their e-commerce site, which makes up 30 to 35 percent of their sales and now serves as a testing ground for more progressive designers before they bring them in-store. They are also settling into their new location, which isn’t as highly trafficked as the Crosby Street store, but the area — it sits on Greene Street between Canal and Grand — is quickly developing. The Webster is reportedly set to open its first New York store on the block within the next few years.

As for additional brick-and-mortar locations, Trunzo and Breen plan to set up shop in either Los Angeles, San Francisco, Washington, D.C., or Chicago in fall 2017.

They didn’t say whether the business, which is self-funded, was profitable or not, but that’s not their immediate concern right now.

“Our goal is to get things set up now and worry about profitability next,” Breen said. “Part of doing this and leaving the legal community was to be our own bosses, but if Mickey Drexler walked in the door and said he wanted to invest in our business, I would be open to the conversation.”