The French men's brand opened a store on Savile Row in May and is adding a unit in Bal Harbor, Fla., in July.

The exterior of the new Savile Row store in London.

Cremieux has ambitious plans to significantly expand its retail footprint.

The French men’s brand founded by Daniel Cremieux in Saint-Tropez, France, in 1976, added two new stores in Europe during the pandemic and will open another two boutiques in the U.S. this summer and next spring as it moves toward its goal to have 30 stores around the world within five years. Currently, the men’s wear brand operates six stores: Saint Tropez, Paris, Capri, London, New York City and Palm Beach, Fla.

Stephane Cremieux, the founder’s son who serves as designer and chief executive officer, said the Capri store opened last June during the worst days of the pandemic and while it had a rough start, business has picked up this year as tourism begins to rebound. And on May 21, Cremieux opened a shop at 37 Savile Row in the epicenter of men’s bespoke tailoring. Cremieux’s mix is more casual than most of the other stores on the street, but Stephane Cremieux said the initial response has been strong.

“I remember coming to London from Paris for a men’s shopping weekend with my father, when he would go to his tailor on Savile Row,” Cremieux said. “To open a store on Savile Row has been a dream come true for me and I know for my father, too.”

Looking ahead, he said a Bal Harbor, Fla., store is slated to open in July followed by a unit in a new development at the Boston seaport next March. The locations would mirror where the brand’s customers live, work and play.

“We want to follow the cycle of our clients,” he said. “If they ski, we want to be at the ski resort. If they go to the beach, we want to be there, too. Our beach resort stores have been very successful.”

Cremieux said the retail rollout would be “fully controlled and operated by us.” Although he didn’t rule out possibly taking on investors, the plan right now is to go it alone. “We’ve been approached — we’re one of the last family-owned French luxury brands — but we love our independence,” he said.

He believes that the brand has found a niche by opening small boutiques — 600 square feet or so — rather than large flagships, and offering an upbeat atmosphere and customer-focused hospitality. He said all the talk among retailers about offering “experiences” is often lip service “when there are signs of 50 percent off and there’s no one to help you.” Instead, he seeks to create warm stores where well-trained staff welcomes shoppers. “Retail should be fun,” he said, “with good music and good ambiance — like a good restaurant.” 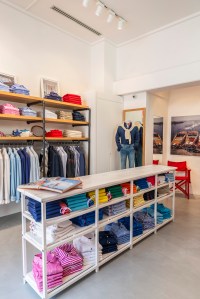 The Capri store opened during the pandemic.

“We’re trying to give the feel of new luxury,” he continued. In France and other parts of Europe, luxury is associated with the “big maisons” such as Hermès, Gucci and others. But Cremieux seeks to offer high-quality product that falls between contemporary and bespoke and is centered around a “dressy casual” aesthetic. Think floral printed shorts, supima cotton polos, muslin, poplin or chambray button-down shirts and washed cargo pants. And while the brand also offers blazers — many in traditional men’s wear patterns such as houndstooth, windowpanes and glen plaids — they’re completely unconstructed and lightweight.

In addition to its own stores, Cremieux has a longstanding relationship with Dillard’s with whom it has had an exclusive licensing agreement for 22 years in the U.S. and where the brand has consistently been among the top performers. “We just renewed our relationship for many years,” Cremieux said.

But while the sensibility may be similar, the assortment sold at Dillard’s is completely different and sells at a lower price point. For example, a houndstooth blazer made in Italy is sold at the Cremieux store for $1,695, a cashmere hoodie is $695 and cotton printed shorts are $195, while at Dillard’s, shorts retail for $49.50 to $65, a short-sleeve knit camp shirt is $85 and a slim-cut wool suit is $695.

He believes that “tremendous opportunity” still exists with Dillard’s, which rebounded more quickly than other U.S. retailers because of its reach in the Southeast and Southwest. And in Cremieux’s mind, rolling out its own retail stores will only help its business with Dillard’s. “We sell higher end, more limited product, so they complement each other,” he said.

He added that he’s talking with the retailer about offering women’s wear as well. Although Dillard’s had created and sold Cremieux women’s merchandise in the past, that line was discontinued several years ago. “We want to be credible and our biggest challenge is to create a relevant women’s line,” he said.

He stressed that the deal with Dillard’s is a license and not a traditional wholesale relationship. Cremieux actually moved to New York in 2011 to open an office and launch a wholesale business with independent specialty stores, but the company moved away from that idea and opted to open its own stores instead. But the company still has a licensee in South Korea where it also has operates a successful business.

All told, Cremieux is upbeat about the future. “Our business is growing organically,” he said. “People are going back to their offices and COVID-19 was actually an accelerator for our business as people sought fewer but better pieces. I’m very optimistic.”