The sports superstar talks about Kent & Curwen on a swing through China. 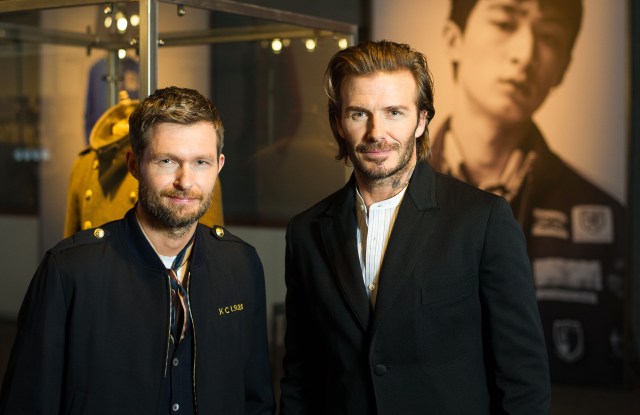 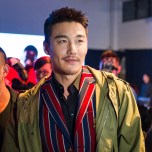 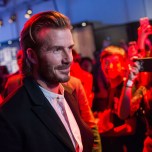 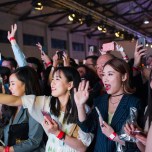 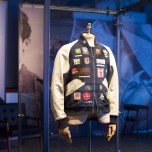 SHANGHAI — David Beckham is bringing a touch of British heritage to Shanghai with the global launch of Kent & Curwen’s fall collection as well as a capsule line for Lane Crawford called Shanghai Club.

The British sports superstar and Kent & Curwen creative director Daniel Kearns attended a lavish cocktail event, which was attended by Chinese model Hu Bing along with other Chinese KOLs and held at The Waterhouse at South Bund. They also launched the Shanghai Club capsule collection at a pop-up store in Lane Crawford.

This visit marked Beckham’s first appearance in China on behalf of the men’s wear brand and was part of the extended rollout of the fall collection, with the spring line, the first collaboration between Beckham and Kearns, already available in the country. Beckham is part owner of the British heritage men’s wear brand, which was founded in 1926, after an agreement was made between Seven Global, his joint venture with business partner Simon Fuller, and Global Brands Group Holding Ltd., a spin-off of Li & Fung at the end of 2014.

Kent & Curwen, which is owned by Hong Kong-based Trinity International Ltd., began life as a sportswear company, famous for its cricket sweaters, and it is this unique and authentic British heritage that Kearns and Beckham have played upon when designing the new collections.

“In the past year, myself and David have been working on the new strategy for the brand. In terms of collection direction, the idea was to go back to the origin of the brand, to look into the archive,” said Kearns, who has previously worked at Alexander McQueen, Louis Vuitton and Yves Saint Laurent, and most recently as artistic director of Façonnable. “I think globally, everyone looks to England and Britain for men’s wear and for style. So I think we have a kind of an ownership over a lot of that and the idea is to really reinvent that and bring it to a new generation. We are planning to roll that out across China.”

China is a key marketplace for the brand, being home to an already strong consumer base. “Kent & Curwen has had a huge footprint in China for the last 30 years, so in a way, it’s a household name here. It’s really important to us to maintain that, but also evolve it at the same time,” said Kearns.

“We have 70 stores in China and then 100 stores in Asia, so that’s a good start, but the ideas and the concept that we have for our store in London, that’s what we want to start doing in Asia as well,” said Beckham.

Beckham and Kearns have consistently emphasized the idea that the collection is cross-generational, with Beckham’s eldest son, Brooklyn, known to be a fan of his father’s work. “It’s about lifestyle. It’s about more of an attitude of what you want to wear, what your lifestyle is like, and your appreciation of British heritage and these types of garments,” said Kearns. “We know there is an older customer here today that’s a very loyal customer and has been loyal to the brand for over 30 years. We don’t want to turn our backs on that customer, so we are trying to come up with a formula that very much elevates the brand and pushes the brand forward, but does not turn our back on the existing customer we have.”

There is a strong rugby and cricket influence throughout the collection, a throwback to the original Kent & Curwen business model, with rose emblems updated with metallic colors and the three lions proudly brandished across the chest of shirts. “To bring back the rugby shirt is something that we are very proud of,” said Beckham. “The three lions [the Royal Arms of England] has been a very big part of my life, for my whole career, something I was proud of.”

When it comes to British design aesthetics in China, brands run the risk of getting lost in the malaise of kitsch, imitation offerings from companies looking to cash in on the country’s anglophiles. To combat this, Kent and Curwen hope to bring its own heritage and authenticity to the forefront.

“With my history as well within sport, to keep [the three lions] there is something that is authentic, because I think when you are not authentic within a brand, people notice that and realize that and I think people want that as well,” said Beckham.

“I think Chinese consumers really appreciate the idea of codes and I think they like the traditional attitude of dressing for occasion, dressing for dinner, dressing down, dressing for travel, these types of aspects of lifestyle. I think Britain is the sort of go to reference for that in terms of codes. If you look at the heritage of morning dress, evening dress, dinner dress and all the sporting references, I think it’s definitely set the codes for global men’s wear style,” said Kearns.

The Shanghai Club capsule collection is an extension of the main line, created especially for Chinese shoppers. “We had one of the stripes in the full collection that we felt very strongly about. It came from our archive so we liked the idea of focusing in on that and expanding it into a little capsule range. We took the colorations out of that, and then also the idea of the bullion for the rose, a sort of new interpretation of that in the metallic bullion that gives it its military edge that we have in the capsule,” said Kearns.

The main collection continues to take its cue from quintessentially British pastimes, including reinterpreted Boy Scout badges, military insignia and outfits worn for traditional sports such as rowing, cricket and ruby. Kearns also cited photographer Irving Penn’s stills of small tradesman at work as an inspiration, with items from the collection having a worn-in, aged look, such as the satin bomber jacket made from material with aluminum in it, to give a wrinkled look, or the military inspired greatcoat, made from the same wool used to make officers’ coats in World War I. T-shirts and knitwear follow the theme, with nipping and aging, while the classic peg-leg-shaped trouser and hobnail boot also make an appearance.

’50 Most Powerful Moms of 2017′ Released by Working Mother