When the Destination XL annual shareholders meeting opens on Thursday, there will be a different face at the podium: Harvey Kanter, the company’s new president and chief executive officer.

Kanter, whose résumé includes Blue Nile, Moosejaw Mountaineering, Eddie Bauer and Backcountry Travel Inc., was named to the top post at the country’s largest big and tall men’s retailer in February. He succeeded David Levin, who revealed in March 2018 that he would retire from the company at the end of the year after an 18-year run. It took the company nearly a year, and two search firms, before the board selected Kanter.

In the past six months, Kanter has immersed himself in the company’s culture and gotten a crash course in this highly specialized business. He started out as an adviser, working with Levin, who had stayed on as interim ceo, until April 1. But now that his feet are firmly planted on the ground at the retailer’s headquarters in Canton, Mass., Kanter has his game plan in place for the 225 DXL full-price and outlet stores in the U.S. and Canada. The company also operates around 100 Casual Male and Rochester Clothing stores, but both those nameplates are being phased out to concentrate on DXL.

With annual sales of $474 million, the retailer is by far the market leader in the men’s big and tall business. But its new ceo sees further opportunities ahead by better communicating with customers, enhancing the store experience and expanding on the company’s nascent wholesale division.

He’ll also work to bring the company back into the black. For the fiscal year, Destination XL Group managed to cut net losses to $13.5 million from $18.8 million. But in the first quarter of this year, challenges continued as weather woes impacted traffic in both the stores and on the web. Although the net loss of $3.1 million was the same as the year before, comparable-store sales dipped 1.2 percent in the period and adjusted EBITA dropped to $4.8 million from $5.3 million in the prior-year quarter.

Even so, Kanter remains upbeat about the company’s prospects. He said at the time that DXL’s number-one priority is to “grow our customer file, drive greater retention, acquisition and ensure our marketing dollars are delivering an acceptable return.”

Kanter, who is 6 feet, 1 inch and 170 pounds, admitted he hadn’t spent much time in DXL or Casual Male stores before he was recruited. “I can go anywhere to shop, but big and tall men can only go to DXL,” he said. These larger guys also have a hard time finding clothes that actually fit and flatter their physiques, he added. But DXL has an advantage by not only focusing exclusively on extended sizing — “At DXL, big and tall is all we do,” Kanter has said — but also offering product that is created expressly for the larger man. 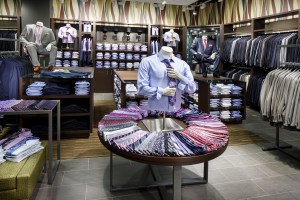 A furnishings display at a DXL store.  Mark A Steele

“Most of our competitors just offer sizes that are an extension of their core sizes,” he said. “We don’t just scale up a large; our fit is materially different.”

He said when a man enters a DXL store, the sales associates start by measuring him to get an accurate fit and then work to build a wardrobe. “They come in for a transaction and leave with an experience,” he said. Once they know their size, the customer can then confidently buy either in store or online.

Experiential retailing is all the buzz these days and at DXL, it’s not as much about offering a coffee and turning on the basketball game as it is about boosting esteem. “The experience in the stores is so different — more like a haberdashery,” he said. “We serve a distinct consumer who has a real need. And whether it’s branded or private label, you know it fits you perfectly.”

In fact, Kanter said that during his store visits over the past few months, he’s seen customers have an “a-ha moment” after they try on merchandise. “I’ve seen guys come out of the dressing room and tear up,” Kanter said. “It really boosts their self-esteem.” 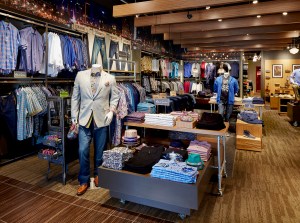 A DXL store in Florida.

Half of DXL’s mix is national brands and the rest is private label, the ceo said, with the branded business growing quickly.

Kanter said the most popular categories today are activewear and sportswear from brands such as Vineyard Vines and Psycho Bunny.

Also growing is business from the “end of the rack” customers, or guys size 38 to 42 who are larger than traditional men but not exclusively big and tall. “We carry the broadest assortment of XL and above of maybe anyone in the world,” he said.

To capitalize on this, the company in January created a wholesale division to develop and distribute both private label and cobranded big and tall apparel to other retailers, including Amazon. The online behemoth is using DXL as the provider of men’s big and tall sizes for the private brand Amazon Essentials, in sizes 2XL and above. The “Amazon Essentials Fit by DXL” collection also sports DXL’s proprietary fit.

DXL has been selling on Amazon for the past few years, but this is the first time it is partnering with the e-tailer for wholesale product.

Kanter said the Amazon business is still in its infancy, accounting for $2.5 million in sales for the fourth quarter of fiscal 2018 as well as the first quarter of this year, but he’s hopeful it will continue to grow. “We’re walking before we run,” he said, noting the DXL product has achieved a 4.3 out of 5-star rating on Amazon, which he said is “quite spectacular.”

He said the thinking behind working with Amazon is that it gives DXL “good visibility” and is an “extension” of the company’s own store experience.

Kanter believes there is an opportunity to work with other retailers as well in the future. “For large retailers, it’s [big and tall] too small a market to create special product, but they can partner with DXL” to offer customers more fit and fashion options, he said.

Another way DXL will be expanding its reach is through marketing. On July 11, the company parted ways with James Davey, a former Timberland executive who had joined DXL as executive vice president and chief marketing officer in 2018. He has not yet been replaced.

Kanter said the company will work to “personalize and segment” its marketing in the future to home in more on specific consumers and geographic areas. A new customer relationship management system and e-mail platform will also be utilized to better communicate with customers.

“There’s no silver bullet,” Kanter said. “We’re going to fill the top of the funnel with broad media — radio and TV — and use digital opportunities to engage the consumers by their personal needs.”

So if a guy has shown he’s a shoe shopper, he’ll get e-mails centered around footwear. Ditto for fans of Polo Ralph Lauren or Vineyard Vines. “In today’s environment, using data and analytics can really drive engagement with the consumer,” he said.

Beyond that, Kanter said there are no plans to significantly add to the store fleet, but the company will work to convert more DXL and Casual Male outlet shoppers to regular-price customers. A few stores may be added on a case-by-case basis if the analytics show that a particular region has a large pool of potential customers.

As Kanter settles into the ceo seat, he knows it won’t be easy, but he’s optimistic about DXL’s future. “I think I’m the perfect fit to take a half a billion-dollar company and materially grow revenues.”