A design that showcases sportswear and cuts down on the number of suits on the floor is being tested in locations around the U.S.

Men’s Wearhouse 2.0. That’s one way to describe the ambitious new store design program the retailer has created to update and modernize its fleet.

This Next-Gen concept was created by Tailored Brands, Men’s Wearhouse’s parent, in partnership with the architecture firm Nelson Worldwide, and features the bells and whistles today’s customer demands…and that Tailored Brands itself needs.

The retail group, which also owns Jos. A Bank and Moores in Canada, emerged from bankruptcy as a private company in early December with less debt and far fewer stores, but still a work in progress, both because of the pandemic and the upheaval it has caused in the way men dress. A fixture in malls and strip centers, Tailored Brands has had to cope with many of its physical stores being shuttered due to lockdowns, plus banners that had long been the go-to resource for men looking for suits, ties and formalwear — but less so for the casualwear that has become the norm for many men in the WFH era. Even in the tailored clothing realm, the group’s chains had lost ground to newer brands like Suitsupply, which appealed to a younger generation looking for more edgier fashion.

So updating the look of its core Men’s Wearhouse stores is vital as the retailer prepares for business post-coronavirus — whenever that might happen. The new concept includes a significant reduction in hanging stock as well as an in-store design that features clean sight lines and perimeter walls that allow for more merchandising of head-to-toe looks and an enhanced focus on sportswear and polished casual looks, a clear adjustment to men’s new way of dressing. Glass panels and a color palette of oak, gray and blue accented by glass and steel finishes are intended to complement the revamped merchandise mix. 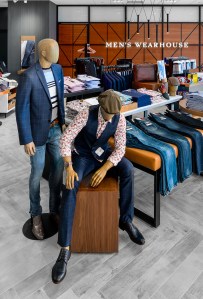 Sportswear is a key component of the Next-Gen stores.  Dee Zunker

“We know that men’s wear retail is changing rapidly, driven by customers who are digitally connected, in control and expecting zero friction as they engage in digital and physical environments — often simultaneously,” said Tailored Brands chief customer officer Carrie Ask. “Over the past nine months, Tailored Brands successfully launched more than 30 new digital capabilities to support the customer and employee experience including buy online, pick up in-store, contactless measurement and curbside pick-up. Our knowledgeable sales team is known for delivering exceptional service to customers, individualized to their needs and specific style preferences. This long-term strength, combined with the exciting new technological advancements we are unveiling, demonstrates our continued commitment to service and innovation.” 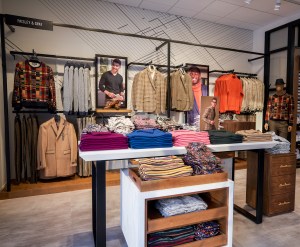 Ask said the Next-Gen concept was created after thorough research from customers and staff in a variety of departments including marketing and planning. The goal, she said, is to “modernize Men’s Wearhouse” and create stores that would support that strategy.

A lynchpin of this strategy, Ask said, is The Vault, which allows for a substantial reduction of inventory on the floor while retaining the stores’ historically wide range of sizes. “We’ve always kept a range of sizes in the store,” Ask said. “We are preserving that legacy but liberating space for more storytelling. We’ve opened up the entire sales floor.” It also eliminates the sea of sleeves that has been a hallmark of the stores for years. 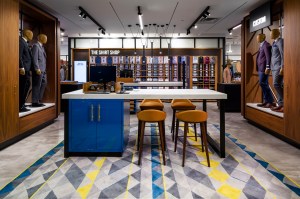 “Our on-floor suiting count has been reduced by 85 percent, while delivering increased sales and selling margin, proving that curating our assortments deliver stronger performance and a better consumer experience.

There is also a Shirt Shop which includes an interactive touch-screen display that allows customers to select style, fit and color from in-store and online inventory. In the rental department, and throughout the store, the company is employing 3DLook which uses artificial intelligence to determine a customer’s size by analyzing two photos — a first for any men’s wear retailer in the U.S., Ask said.

Other elements include more mannequins and floor-to-ceiling digital displays that can be changed seasonally.

The Next-Gen stores also rejigger the positioning of the assortment with casualwear and rental merchandise pulled to the front. Ask said rentals, which are a big business for Men’s Wearhouse, require customers to visit the store to return their merchandise and the hope is that they’ll be enticed to pick up some other items while they’re there.

Zones were also created to better highlight the polished casual assortment, suits — now positioned next to The Vault — and the custom department. 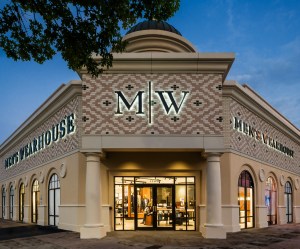 One of the exteriors of the Next-Gen stores.  Dee Zunker

The first two Next-Gen stores opened quietly at the end of last year in Shenandoah, Texas, and Buford, Ga. Ask said that the Texas store was a remodel of an existing unit and the Georgia store was a relocation. A third Next-Gen store will be opening in the San Francisco Bay area shortly, she said. The locations were chosen in order for the company to gather results from different parts of the country — and they’re also located next to large offices for Tailored Brands in Houston, Atlanta and outside San Francisco.

Once the Bay Area store opens, Tailored Brands will take a break to assess the results. “For now, we’ll be gathering insight to maximize our learnings and make refinements,” she said.

But so far, so good. Since opening, Ask revealed, both of the Next-Gen stores are “outperforming the fleet,” with strength in denim, chinos, knitwear and suits along with furnishings and accessories. 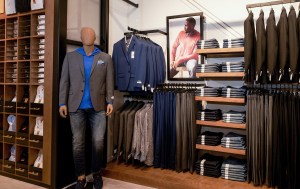 Collection by Michael Strahan is a popular new addition to the mix.

The Alternative Apparel sportswear brand, which these stores are integrating with tailored clothing on mannequins, as well as the Collection by Michael Strahan denim have been especially strong performers in these units, she said.

Eventually, this Next-Gen concept may roll out — at least in part — to all 638 Men’s Wearhouse stores. “But there are design elements that could roll out independent of a full remodel,” she said, pointing to the digital shirt wall as an example.

The concept will also be employed at the company’s Moores stores in Canada, she said. Although most of these stores remain closed because of the pandemic, Ask said there is “a lot of applicability” between Men’s Wearhouse and Moores. But the concept will be tweaked to appeal directly to the nuances of the Canadian customer, she added.

Next-Gen will not be used at the Jos. A. Bank stores, however. Ask said that much of that fleet has already been refreshed, so another remodel is not immediately necessary.

Since emerging from bankruptcy, Ask said Tailored Brands sees “reasons for cautious optimism” for the future. Forward bookings for rentals are strong and an indicator that once the vaccine rollout is expanded, people will be eager to get out and start celebrating what they’ve been missing for the past year.

“Weddings are still happening,” she said, but they’re “mini-monies” rather than full-blown affairs because of the pandemic. “But the numbers of weddings are going to be up this year.”

To capitalize on this, Men’s Wearhouse has launched three new styles with Vera Wang, whose tuxedo for the chain has historically been one of its strongest performers. The new additions include a peak lapel tuxedo, a blue suit and a midnight blue notch-lapel tuxedo.

Moves such as this provide hope for a brighter future ahead.

“As hard as this past year has been, we’re confident we’ve made all the right moves to position this as a stronger company,” she said.

Under the terms of its restructuring plan, the company eliminated $686 million of debt from its balance sheet, closed some 500 stores and negotiated a $430 million asset-based loan facility, a $365 million exit-term loan and $75 million of cash from a new debt facility.

“So we intend to continue to strengthen this company and better serve our customer in ways they want to shop,” Ask said.