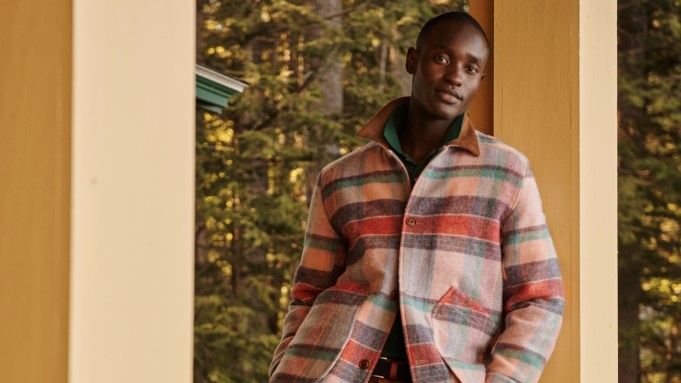 Brendon Babenzien didn’t reinvent the wheel — he just polished it up a bit.

Babenzien, who was named men’s creative director of J. Crew last May, has unveiled his first collection for the retailer, which will hit stores for fall. The collection plays with the brand’s preppy heritage, updating it for the current consumer.

The designer, the cofounder of the Noah menswear brand and former design director at Supreme, said he set out to “boil it all down and just be sure I’m making great clothes. I’m not reinventing the wheel and it’s not a matter of changing a lot of things. We still have a lot of goodwill from our customers so it became about nuanced choices.”

Although he said he did push some of the design elements, “I don’t believe it was pushed too far. It’s all based in the reality of the world J. Crew has always existed in.”

Instead, he viewed the design process as “resetting and gaining an understanding of who we are as a brand.”

Libby Wadle, chief executive officer of J. Crew, said: “Our customers are always evolving, and we are laser-focused on meeting them where they are. They are looking for modern classics that will live in their closet forever and Brendon’s creative vision brings a fresh perspective to that aesthetic. I’ve always loved how Brendon tells a story through his designs, which you can see in his inaugural collection — it reflects  J. Crew’s heritage, as well as where we are headed. J. Crew is at its best when we lead with product, design and creativity; Brendon is a true creative, striking the perfect balance of getting it right for our most loyal customers, while also inspiring new ones.”

Babenzien, who said he continues to design Noah in addition to J. Crew’s menswear — “I have two full-time jobs,” he said with a laugh — said among his favorite pieces in the inaugural collection is a suede argyle vest, “which is not part of the history, but is me imagining things that should have been.”

He said he also combined different pieces into new iterations, such as the wool madras barn coat.

“I’m taking things that are recognizable and understandable and bringing them together to make a new item.”

Babenzien said he also updated the fits, which had gotten too slim in his opinion. He pointed to the chino as an example: “A chino has always been about a looser fit for me so I’ve brought back a bigger fit.”

He said he expects that to appeal to J. Crew’s long-standing customer who remembered when the pants were more roomy as well as younger people who may have never shopped at the store but may be lured in to try it now.

Babenzien said he will design four full collections a year for J. Crew but product will refresh with new drops every two weeks.

As men’s creative director of J. Crew, Babenzien has some big shoes to fill. Todd Snyder had held that position and was followed by Frank Muytjens, who exited the role in 2017 following a corporate restructuring.

Under these two designers, J. Crew helped define the urban-outdoorsman trend in the early 2000s — dark jeans, plaid shirts, heavy boots — and the Snyder-designed Ludlow suit in a slim cut became popular with the younger, more hip man. Snyder also introduced a number of third-party collaborations to augment it. Crew’s in-house offering, embracing a strategy that has now become commonplace in fashion.

At the time of his appointment, J. Crew credited Babenzien with having been instrumental in elevating Supreme from “a niche skatewear brand to the global stage” and building the Noah label into a high-quality, environmentally conscious brand that mixed skate, surf and music cultures with an appreciation of classic menswear.

Babenzien’s appointment is seen as critical to reigniting a spark that J. Crew has been missing for several years. Although the brand is still well-known, it has suffered from declining sales at times due to quality and design issues.

Under the weight of heavy debt and the impact of the pandemic, J. Crew Group filed for Chapter 11 in May 2020 and completed a four-month restructuring process by sharply reducing its debt and bringing in new ownership. The company converted $1.6 billion of its $1.7 billion of debt into equity, establishing Anchorage Capital Group LLC as its majority owner.