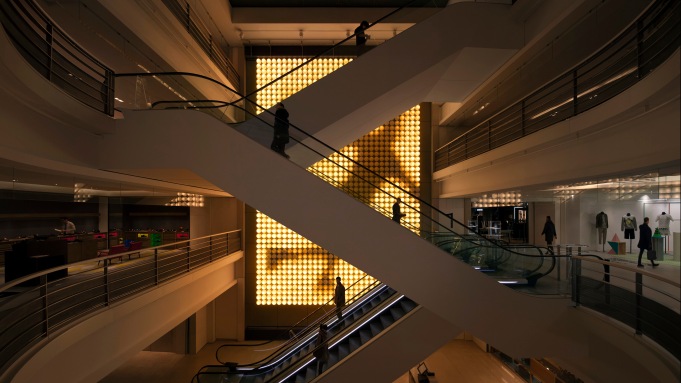 Following two years of market research and nine months of construction, the French department store this week unveiled the revamped men’s floors of its Paris flagship.

“The floors’ last update dates back to 2001,” said Elisabeth Cazorla, director of ready-to-wear for men, women and children at Galeries Lafayette. “And yet we have seen a tremendous evolution in the men’s wear market since then. The studies we have conducted have shown us how much our customer has evolved and how his needs have evolved. He is clearly asking for a curated selection of new brands, of which there has been a huge influx lately, and also for more exclusive products.”

“Before, men’s buying patterns were driven by purpose and function. Now there is an additional element — that of pleasure, which makes our job very interesting,” added Odile Boucher, the store’s men’s buying director. “We have a new generation — call it X and Y — that grew up with fast-fashion, that is following trends and knows exactly what it wants. Naturally, their styles have developed with them. We have to figure out how to mix and match these new patterns while also catering to a more traditional consumer.”

Galeries Lafayette has enlarged its men’s area to 130,000 square feet, from 91,500 square feet, adding an entire floor which previously housed gourmet products, now housed in a separate building across the street. It also added 110 brands, 80 of which are exclusive. It doubled the men’s footwear department, which now houses more than 650 styles of sneakers, and instated a so-called savoir-faire area, where brands like Ermenegildo Zegna, Brioni and Kiton offer made-to-measure services, for which there was previously no room.

VIP rooms, a concierge and click-and-collect are also available, alongside two restaurants, one of which is Big Fernand, one of Paris’ most coveted burger joints.

“Getting more space was crucial,” said Boucher. “We had to make the aisles larger to increase the fluidity of traffic because men are creatures of comfort.”

The new layout is visibly lighter and the department now spans more than four floors divided into accessories; urban, street and sport; casual and contemporary; luxury, and formal.

Each floor houses a multibrand store, boasting a handpicked selection of niche and emerging brands, which is to be updated on a regular basis. The urban and street floor, for instance, showcases Off-White, Gosha Rubchinskiy, Yeezy, Adidas by Kolor and Marcelo Burlon, among others, while the luxury level offers labels such as Junya Watanabe, Andrea Pompilio, Juun.J and Massimo Piombo. All are new to Galeries Lafayette and all are exclusive, selected by a new scout named within the buying team to reflect the new status quo, said Boucher, who divulged, “We were very surprised how quickly the concept found a new clientele since we introduced it in November. Some of the brands already sold out.”

According to a research study provided by the French Fashion Institute, men aged between 15 and 29 spend more on fashion than women in the same age group, boasting on average an annual budget of 538 euros, or $597. T-shirts, jeans and sneakers are top of their list, but as they grow older, the retailers argue, their tastes also become more refined.

“The most sought-after items are currently runway pieces. Male customers very much look for something iconic or unique,” said Cazorla, who noted that unlike in the women’s division, where tourist spending is high, the men’s department sports a healthy balance between international and local customers, with potential to growth across all groups.

“The category has been growing year-over-year and will again increase this year, not just in Paris, but also in smaller cities such as Bordeaux and Nice,” the executive noted, projecting the growth rate at about 10 percent. “The category is one we also want to invest in in the future.”

On Tuesday night, Galeries Lafayette unveiled a flashy light installation by artist Xavier Veilhan that features in the men’s department. The wall — resembling a flashing disco dance floor — is clad with 1,536 lamplights containing a total of 6,144 LED bulbs that function as pixels, creating movement to symbolize the dynamism of a department store.