The opening of Men’s Sports is the final phase of a project that began in 2018, consolidating the entire men's wear offer on the store's second floor.

The EA7 space at Harrods new men's sports area on the second floor.

LONDON — Harrods has begun playing hardball in the men’s athletic market, opening a new, 4,000-square-foot space that is the final phase of a multiyear project to consolidate its men’s offer on the store’s second floor.

The refurbishment of Harrods men’s wear began in 2018 and is part of a 200 million pound, store-wide project that’s set to finish in early 2023.

Men’s Sports is located on the second floor, with the rest of men’s wear, and stocks gear for most activities, including cycling, yoga, golf and tennis. The space houses 20 brands, while there are nine permanent, branded shopfits including ON Running, Lululemon, the first men’s only destination for the brand in the U.K., and Rapha.

There is also a lifestyle skew, with brands including Canada’s Reigning Champ, EA7, Fred Perry and Lacoste.

Simon Longland, head of menswear at Harrods, said the store’s goal is to cater to every sporting need. “Curating the brand assortment in this room meant providing an elevation to our customer’s existing workout wardrobes, and allowing them to feel the best and most agile, no matter what way they like to work out, whether that is indoors or out.”

The nine shopfits surround a centralized, multibrand area that stocks merchandise from the Italian lifestyle brand K Way, Falke sports socks and compression wear from 2XU. There is also a pop-up space beside the permanent shopfits, and that will be occupied for the duration of 2021 by the Australian cycling brand MAAP. 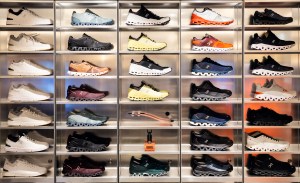 The men’s wear redevelopment venture was designed by David Collins Studio Ltd., and the space mirrors the look and feel of the previously launched rooms, with gray and white checkered marble flooring, contemporary and clean marble pillars and cool tones running throughout for an ultra-modern air.

“Function is key and features a clean and masculine palette of metals and marbles with natural woods being less present throughout the space,” Longland said.

Since stores in England were allowed to reopen on April 12, Harrods has been forging ahead with various projects that had been put on hold during the three national lockdowns.

As reported, Harrods opened its second H Beauty unit in April, in Buckinghamshire, England. The stand-alone beauty concept opened in Milton Keynes, about 50 miles northwest of London, and is larger than the first store, which opened last September at the Lakeside Shopping Centre in Essex, just outside London.