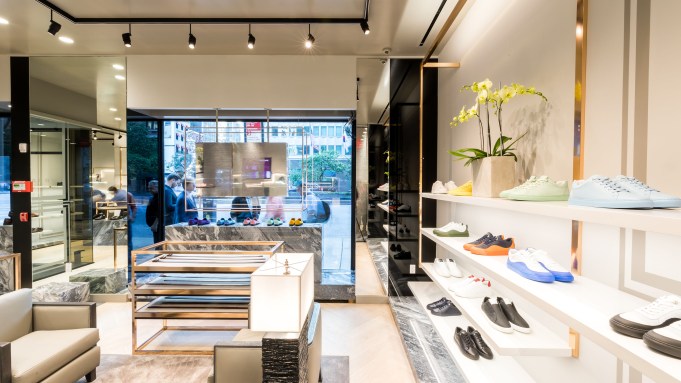 It was just over a year ago that the billionaire commercial real estate developer purchased Harrys of London, a U.K.-based footwear and accessories label. And today, Cohen has opened the doors to the brand’s first retail store, a boutique with 770 square feet of selling space on Park Avenue and 57th Street. The store is adjacent to a space that will house a 2,000-square-foot Richard James store, the other British men’s wear brand in which Cohen bought a majority stake last March. That store is expected to open in late August.

Both brands were personal favorites of Cohen’s and were searching for new owners, so the developer stepped up and purchased them. But he’s hardly been an absentee owner. He serves as chairman for both labels and has immersed himself in reinventing the brands by modernizing and updating them.

“It’s been an exciting adventure,” Cohen said. “And it’s gone better than I ever imagined.” In fact, he said he’s just about to finalize his third fashion acquisition, one that will be “complementary” to Harrys and Richard James. He declined to provide more details, but said this one is not a British brand.

At Harrys, Cohen parted ways last October with Steven Newey, chief executive officer, and brought in Richard Cohen as an adviser. Richard, who has held senior positions with Ermenegildo Zegna, Saks Fifth Avenue, Robert Talbott, St. John Knits and Trinity Ltd., has been a “big benefit” to Harrys, Charles said. The two are not related.

Both men were on hand Tuesday to supervise the finishing touches that were being put on the new store. Nicolas Vendramin, chief merchandiser for the brand, was also there to ensure that the shoes, belts and hosiery were positioned properly within the space.

The new store was designed by Christian Lahoude Studio, a New York-based design firm that has done work for Alexander Wang, Tiffany & Co., Jimmy Choo and Gucci, among others. The design was inspired by London’s venerable gentlemen’s clubs and the hotels in Mayfair. It features wood moldings, engraved panels in mirrors and tone-on-tone paneling on walls. A rose gold trim is used throughout the space to frame specific areas and is enhanced by integrated lights. The floors are oak smoke fumed wood in a herringbone pattern, with an oiled finish. And the space features Italian gray marble accents.

“We spared no expense,” Charles said, without providing a figure on what the construction cost. He did say that it had been “a raw space” before Lahoude started work. “We’re knocked out by the design aesthetic. And we will be using him in the other businesses I have. It’s a great interpretation of a brand that is now 17 years old. This is a validation of a brand that needs brick-and-mortar to establish its image in America.”

He said he expects the store to attract a following in its new home, where it is located within close proximity to Caruso, Turnbull & Asser and other luxury brands. “This is a very strong men’s neighborhood,” Charles said. “This area is going through a real renaissance and that’s great for New York and us.”

Since coming on board three years ago, Vendramin has upgraded the Harrys collection while retaining its reputation as a contemporary British footwear brand engineered for comfort. He pointed to the Downing model as an example, a penny loafer that combines a formal upper with a sporty Vibram sole, as well as the colorful Basel collection of moccasins that use kudu skins and are designed to be worn without socks.

The insoles of all of the shoes feature Technogel, a trademarked material that was created by a German company and features a biocompatible material that adapts to the foot to provide cushioning and support. The gel is black in the dress shoes and orange in the sneakers, he said.

“We’ve had the Downing and the Basel for 10 years and they haven’t aged,” Vendramin said. “We just took them as a base to expand.”

Prices range from $295 for slippers and $395 for the Downing to $695 for boots, he said. “The prices had been higher,” Charles said, “but we wanted to make it affordable luxury. We totally took it in a different direction, are more focused and have a greater attention to quality.”

Right now, there are no plans to move into other categories and Harrys is focusing instead on being known as a footwear brand. “We’re planting our feet first,” Charles said with a laugh.

He believes Harrys is “unique among shoe brands for men” because it offers innovation coupled with a “commitment to comfort. The shoes work for both work and play.”

He expects this mission statement to resonate around the world. He said the company is about to sign a lease for a new retail location in Mayfair in London that will open in around six months. It will replace a store that was recently closed in Burlington Arcade. “We needed a street presence near other brands that are complementary to what we do,” Charles said, adding: “We have a global plan, and the New York store is the launch of our global business.”

Richard said the plan is to bring Harrys to the Middle East and Far East “soon.” In fact, he envisions building a brand that operates around 20 stores globally. “The future is retail, direct-to-consumer and e-commerce,” he said. The wholesale model is very limiting. Even so, the brand is also carried in high-end independent specialty stores such as Stanley Korshak as well as Bloomingdale’s.

Charles expects there’s room for both channels of distribution and is upbeat about the future for Harrys. “We don’t want to be the biggest, but we want to be the best in class.”