Men’s wear is on the front burner for Hudson’s Bay Co. this spring. 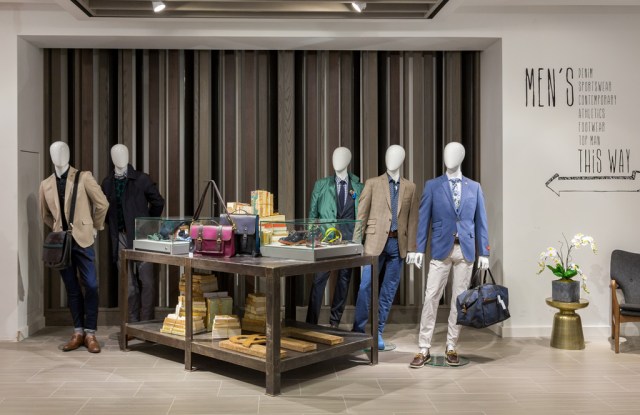 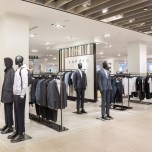 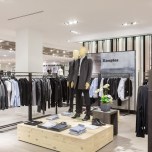 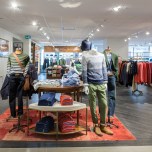 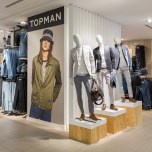 NEW YORK — Men’s wear is on the front burner for Hudson’s Bay Co. this spring.

The Canadian retailer recently completed a massive overhaul of the men’s department at the Queen Street flagship in Toronto that highlights the company’s range of price points in a new clean, elevated atmosphere.

“Men’s has been on a solid growth trajectory for a while,” said Liz Rodbell, president of the Hudson’s Bay Co. Department Store Group. “We’re well penetrated, but we believe men’s still has tremendous growth potential.” Footwear and contemporary sportswear are among the most promising categories, she said, and thus got a big boost during the Queen Street renovation.

The renovation is part of what Wayne Drummond, group senior vice president of apparel for Hudson’s Bay and Lord & Taylor, said is a “huge investment” the company is making in men’s wear. One reason, according to MaryAnne Morin, chief merchant officer of Hudson’s Bay Co., is that: “Men’s is growing at a faster rate than ladies’.”

The company declined to provide a percentage of business that men’s represents, but industry sources say it is in the mid-twenties.

Drummond said that prior to the renovation, men’s had been split between two floors on Queen Street: the second and the concourse, but it has now been brought together on the fifth floor. Although the total size, which is around 100,000 square feet, is slightly less than in the past, the airy design makes for an easier shopping experience, the executives believe. “There’s much more space for product,” Drummond said, describing it as a “very loftlike” design “where guys feel like hanging out. It actually feels larger than before the renovation.”

This is a similar aesthetic to the company’s Vancouver store that was renovated a few years ago.

Windows, which had previously been covered up or visible only in stockrooms, have also been opened up, allowing natural light onto the floor. “The fixtures are relatively simple, and we’re letting the light do the work, so the product can really shine,” Drummond said.

Overall, he said Hudson’s Bay has “created some very distinct lifestyle laneways on the floor” with targeted areas for contemporary, better and classic merchandise. The store built a “denim destination” for the category Drummond called a “growth engine for Hudson’s Bay and Lord & Taylor,” and tailored clothing and furnishings have their own home at the back of the floor.

Although every category got a facelift, the biggest winner in terms of focus on the floor is the contemporary department.

“We’ve really distorted the contemporary area,” Drummond said, adding labels such as Moschino, Eleven Paris and Criminal Damage that are exclusive to the company in Canada.

The Queen Street store also boasts a 4,000-square-foot shoe department that is the “single largest footwear space of any Hudson’s Bay or Lord & Taylor store,” Drummond said. A number of new brands were added to the mix here including Bally, Church’s, Paul Smith, Oliver Sweeney, Hunter, Fish ’N’ Chips and Boss Red. “We’ve added a whole new level of designer shoes and a lot more brands,” Drummond said. The shoes are positioned in such a way that they stretch from the denim area to the clothing department, he said, noting that footwear is “a major hub for men’s today.”

The store has also created a men’s fragrance and grooming space that includes a John Allan’s club and salon, he said.

Among the brands with strong statements in the Queen Street store are Polo Ralph Lauren, which is housed in a shop that spans more than 5,400 square feet, and there’s a 1,500-square-foot shop for Topman, which is exclusive to Hudson’s Bay in Canada. The store has also installed a “whole new active world” of around 3,000 square feet with brands such as Under Armour, Adidas and others.

Morin said the men’s floor has much more of a “natural flow” that was made possible because it was completely gutted and rebuilt to the current team’s specifications. It also showcases the breadth of price points offered.

Rodbell agreed. “It exceeded our expectations and we were happy we were able to offer luxury to more accessible price points, contemporary to classic,” she said.

Tommy Hilfiger, who visited the Queen Street store for a recent event, said he was “very impressed with the assortment and the range of brands presented.” He said the design allows for a “real ability to shop the floor. There’s plenty of light and space, and the layout is modern and thoughtful. It has a strong private label selection and a mix of high and low brands, which is interesting. It looks like it’ll be very successful.”

“The penetration of men’s in Canada is high,” Drummond noted, “and Hudson’s Bay has a disproportionate share. We have [really focused on] the men’s business over the past five years and we cater to every price and style.”

In Canada, where the company operates 90 department stores from coast to coast, there are luxury players such as Holt Renfrew and Harry Rosen, but not a lot of lower-end players. In fact, Target is exiting the market. “There’s really not a moderate retailer in Canada,” Drummond said. So Hudson Bay’s mix of high and low hits all the bases.

“We are the department store of Canada,” Morin added. “We’re in a unique position in our downtown stores because we service the higher end, but we don’t lose sight of the customer who is also coming to us for value. The consumer today is rarely all or nothing in terms of their lifestyles and price points. So he can come in and spend $98 on a Polo short or $29 on a Hudson North one.”

What also sets Hudson’s Bay apart is the company’s strong private brand offering. The team declined to provide a percentage of sales for its private brands, saying only that they represent “an important part of our business.”

Black Brown, which started at L&T and expanded into Hudson’s Bay, was originally designed by Joseph Abboud. Today, Peter Rizzo, the former Barneys New York and Bergdorf Goodman executive, is overseeing the label as senior vice president of men’s design. Drummond revealed that Rizzo is also preparing to introduce the company’s newest label — a brand of suit separates and furnishings targeted to the Millennial customer. Called 1670 — the year Hudson’s Bay was founded — it will hit stores this fall.

The marketing for the company is also being updated to reflect the new merchandising approach.

Michael Crotty, executive vice president and chief marketing officer, said the print and digital offerings have been “elevated.” For spring, the store created a flip-book with men’s on one side and women’s on the other that showcased the variety of price points offered. It was sent to more than one million customers throughout Canada. A separate premium book was also produced that was sent to the more sophisticated urban man. “This is not what people were expecting from Hudson’s Bay,” Crotty said. “But we have this guy in the store and he’s comfortable buying Band of Outsiders in the same place as an Arrow dress shirt.”

A summer catalogue will integrate all categories and products in one book and replace the requisite Mother’s Day and Father’s Day catalogues, he said.

Morin said the changes in the Queen Street store will be reflected in other units across the chain. In addition to the other flagships in Vancouver, Montreal and Yorkdale, elements of this renovation will be reflected in “other doors where men’s is highly penetrated,” she said. This will include Ottawa, which is slated for a major renovation, as well as Southcentre and Richmond Hill.

Three to five stores a year will get a facelift, she said, and the aesthetic showcased at Queen Street will serve as the new standard.

In recent years, Hudson’s Bay Co. — which operates Hudson’s Bay, Lord & Taylor, Saks Fifth Avenue and Saks Off 5th — has been working hard to solidify its financial position. Last year, it initiated the sale and leaseback of the Queen Street property for 650 million Canadian dollars ($523 million) and in November, it completed a $1.25 billion, 20-year mortgage on the ground portion of the Saks Fifth Avenue flagship in New York. At the same time, the corporation has pledged to reinvest $2 billion in cash over the next five years to upgrade its stores and systems. Earlier this month, Hudson’s Bay reported that net earnings almost quadrupled in the fourth quarter ended Jan. 31 to 111 million Canadian dollars, or $95.5 million. The department store group, which includes Hudson’s Bay and Lord & Taylor, saw same-store sales grow 2.3 percent, with men’s wear among the best performers.