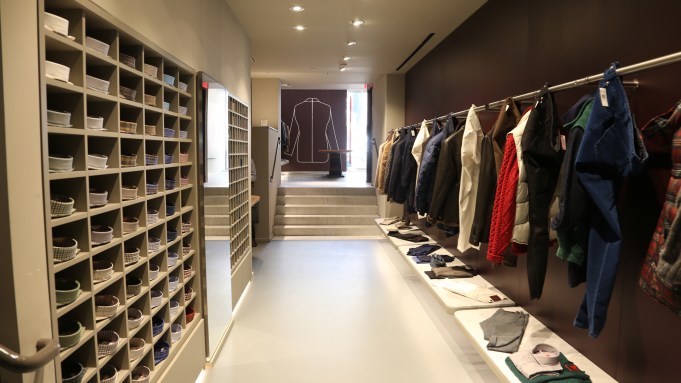 NEW YORK — Isaia has planted its stake on the Upper East Side.

The Italian luxury men’s brand on Tuesday had a soft opening of its largest store to date, a 5,400-square-foot flagship at 819 Madison Ave. at 68th Street. The grand opening will be on Sept. 16.

The store is one of only two in the United States; it joins a Beverly Hills unit that opened at the end of June. There are nine stores around the world.

The store is located in part of the former Donna Karan space and has custom-designed fixtures and vintage pieces from Naples, many of which are in the brand’s signature shade of bright red. The color is used on everything from the custom chandelier designed by Jacopo Foggini and the red lacquered piano to the restored 1940s pool table. There is also a working fireplace set into engraved gold Fontana Arte mirrors.

“Opening our first stores in the U.S. is a huge moment for our brand,” said Gianluca Isaia, global chief executive officer and third generation of the family to helm the privately held business.

He said the design of the store is intended to “juxtapose the sartorial tradition of tailoring with a contemporary perspective.”

The store is narrow and high, spanning three floors. Upon entering, the brand’s tailored clothing is displayed in a showroom setting. A few steps down is the luxury sportswear assortment along with a wall of shirts and ties.

Some 55 percent of the merchandise is exclusive to Isaia in the U.S. and 30 percent is only carried in the New York store. There are pieces from the firm’s archive collection, which are reinvented vintage selections, and made-to-measure is a major focus.

In fact, the second floor is dedicated to the made-to-measure department and there are 112 try-on garments here, along with exclusive fabric choices and an assortment of collars and cuffs. This includes the Solo Otto selection, a super high-end assortment of fabrics that can only produce eight suits, which will retail for $8,000 and up. The try-on garments for the overcoats are in cashmere, reinforcing the luxe aesthetic of the store.

The second floor also houses the tailor shop, which is positioned against windows overlooking the street so customers outside or inside can see the work in progress.

The third floor has a balcony overlooking the street that opens up to an airy room where customers work with sales associates to place their orders. Tucked into the rear is the Vesuvio Room for VIPs with a private bar and sitting area. The company will be adding a garden in the rear of the store as well.

Jim Shay, president of Isaia North America, declined to say what it cost the company to build the store, but said it is expected to have sales of $8 million, a figure he called “attainable. We’ve built a lot of momentum with our partners,” he said, referring to Barneys New York, Bergdorf Goodman and Saks Fifth Avenue, which all carry the label.

Overall, Shay said, the U.S. represents about half of the company’s overall business, which was $44.6 million in 2014, justifying the investment.

Isaia was founded in Naples in the 1920s and now sells to more than 230 stores in the U.S., Europe, the U.K., China, Japan and Russia. Gianluca Isaia said the plan is to hopefully double the business to 100 million euros, or $109 million, within seven years.